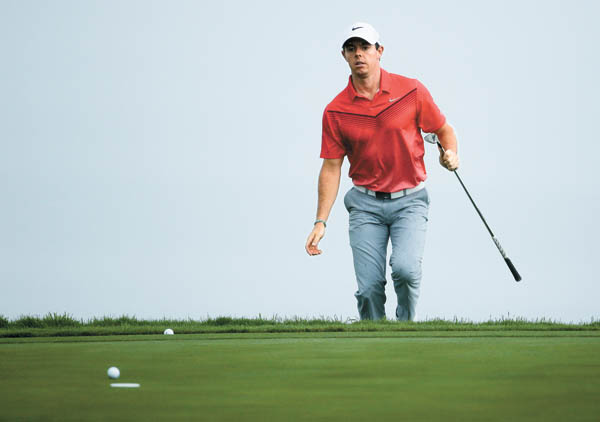 Rory McIlroy watches his chip shot during a practice round for the PGA Championship at Whistling Straits Golf Course on Monday in Haven, Wisconsin. [AP/NEWSIS]

SHEBOYGAN, Wisconsin - Rory McIlroy says he’s 100 percent and his game appears to be in order.

He was talking about golf, not soccer.

McIlroy played another practice round Monday for the PGA Championship and declared himself ready to go at Whistling Straits. The world’s No. 1 player injured ligaments in his left ankle the first weekend in July while playing soccer with friends in Northern Ireland.

Thursday will be his first competitive round since the U.S. Open.

Monday was the first official day of practice for the final major of the year, though it was interrupted throughout the afternoon as thunderstorms rumbled into the area off Lake Michigan and twice suspended play.

McIlroy got his work done in the morning. He flew in from Portugal on the weekend and played twice, and the 26-year-old from Northern Ireland said he has been playing with one ball to keep score and try to regain a competitive feel.

He said he played - and walked - 72 holes during his time in Portugal. That’s much different - as is the injury - from when Tiger Woods played the 2008 U.S. Open at Torrey Pines with shredded ligaments in his left knee and a double stress fracture in his leg. Woods did not walk 18 holes until he teed it up that week at Torrey Pines.

“It actually feels better when I go at it as hard as I want because my left foot sort of spins out of the way whenever I hit the driver anyway,” McIlroy said. “If my left foot was to stay completely flat, like roll on to the left side like a lot of guys do, then it would obviously probably create a few problems. Because mine sort of spins out of the way, it takes a lot of pressure off it.”

McIlroy said he was putting even while he was in a boot to keep his ankle steady.

He began this year with a runner-up finish in Abu Dhabi after a seven-week break, though he conceded it was far different at a major championship.

“I think it’s just the competitiveness of feeling what it’s like to play a tournament,” he said.

“It’s okay coming back to play Abu Dhabi as your first week back, but playing a major, it’s a bit different. Just that sharpness and competitive edge, that’s the thing you really hope is there when you come back.”