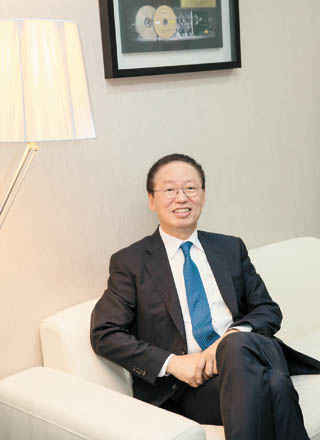 Choe Heung-sik, the new president and CEO of the Seoul Philharmonic Orchestra, met with the local media for the first time on Tuesday. Provided by the orchestra

The new President and CEO of the Seoul Philharmonic Orchestra Choe Heung-sik appeared in front of local media on Tuesday for the first time since his appointment on July 1, amid lingering controversies.

The 62-year-old former top banking executive said he will use his knowledge of business to make sure the Seoul Philharmonic Orchestra overcomes its troubles and turns this crisis into opportunity.

The city-run orchestra has been embroiled in a number of controversies, starting with its former President Park Hyun-jung’s alleged verbal abuse and sexual harassment of staff members and several allegations against the orchestra’s artistic director and principal conductor, Chung Myung-whun, including misusing the orchestra’s funds for personal use as well as his “excessive” salary, which is paid for by taxpayers.

Referring to the past year’s scandals, Choe, who served as the head of Hana Financial Group as well as the Korea Institute of Finance, said that what the orchestra has gone through is a “devil’s blessing.”

“I see this as a growing pain that every organization experiences at some time or another,” he said. “Without such pains, we never examine ourselves and we never learn. Since the orchestra has learned that things can go bad as this, we will take time for self-examination and turn over a new leaf with a new mind.”

Regarding the accusations against Chung, Choe refused to give any details, saying, “[The] police is currently investigating the case, and I hope it soon comes to an end so that the orchestra can settle down as well.”

But as Chung’s current contract expires at the end of this year, Choe said they will discuss renewal under new conditions at least by next month, hinting that the orchestra desires to continue working with Chung.

“I hope that our organization gets known for words like trust, consideration, contribution, passion and so on,” said Choe. “Even though we are a small organization, it is best to build up from such basic principles of business administration.”

Before the offer came to him about three months ago, Choe said he was like many other Seoulites who thought of the Seoul Philharmonic Orchestra as just one of the city-run institutions and had no special feelings toward it.

“Of course I’ve been enjoying listening to classical music but the orchestra has been just an orchestra,” said Choe. “When the offer came, it was only then when I seriously thought about the orchestra’s existence and what I can do for its success.”

“I will make sure that the citizens of Seoul feel proud of having a city orchestra like this,” said Choe. “In order to do that, we’ll meet the citizens more often with higher quality concerts.”

Choe also expressed his desire to support the orchestra to help it become one of the world’s top 10 in 10 years’ time.

“It’s been 10 years since the orchestra became incorporated,” said Choe. “For the past 10 years, I learned that the orchestra has been running ahead to achieve what it has achieved today. But we still have a long way to go to become the world’s top 10.”