How Korea got free Phantoms

How Korea got free Phantoms 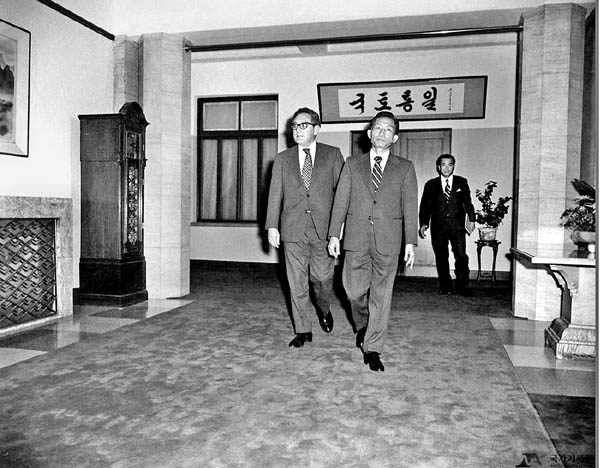 President Park Chung Hee, center, moves to his office after a luncheon with U.S. Secretary of State Henry Kissinger at the Blue House on Nov. 16, 1973. In his tour of East Asia, Kissinger stayed at the Blue House for five hours before flying back to Washington D.C. [National Archives of Korea]

It didn’t sound like a request and I flatly rejected the idea. 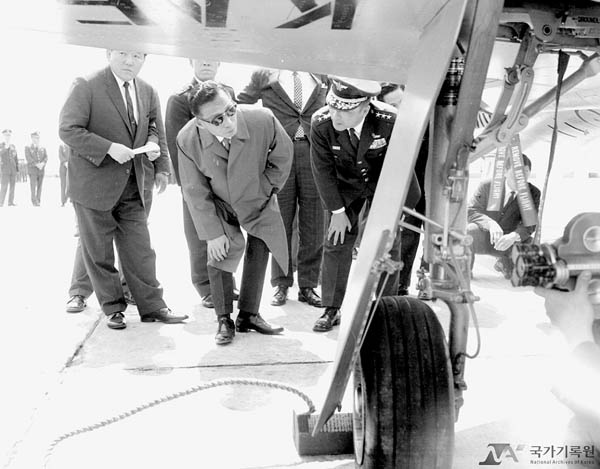 President Park Chung Hee examines a jet at a reception ceremony for F-5A/B fighter jets at Suwon Air Base on April 4, 1965.

“Does the United States care about South Vietnam and no longer about South Korea? If three battalions are gone, our Air Force will get much weaker. I can’t give them to you.”

We had 76 F-5A fighter jets and three battalions meant 54 of them. Habib brushed aside my objection and said, “It’s U.S. policy and please take that into consideration.”

He visited me several days later and asked, “Are you ready to send the fighter jets to South Vietnam?”

I replied, “I’m not and we aren’t sending any to South Vietnam.”

Disturbed, he said, “They are property of the United States, not South Korea. How can you refuse to give them back when the owner requests it?”

“I definitely agree they are owned by the United States,” I said smiling. “But we own them as long as they are in the territory of South Korea. You can’t take them if we say no.”

He gave up on me and went to the Blue House, where he complained to President Park Chung Hee.

“The prime minister is speaking nonsense,” he said.

“If you started the negotiation with the prime minister, you should finish it with him, not me,” Park said.

Then he called me in to ask about it and I explained the situation.

When I said, “I told him that the U.S. jets are ours as long as they are in Korea,” he laughed.

At the end of October, the United States was in a bigger hurry.

Habib asked me, “What are your conditions for releasing the fighter jets?”

I said, “This is our last offer. If you give a battalion of Phantom F-4Ds, we will give two battalions of F-5As.”

Phantoms were the strongest and the newest fighter jets. A Phantom battalion was as strong as two F-5A battalions.

Habib didn’t like it. He said Phantoms were expensive and there weren’t enough supplies yet.

A few days later, he came back. “We will give you a Phantom battalion that was supposed to be sold to Australia. But you will have to give us three F-5A battalions.”

“No,” I said. “Two battalions are already too many.”

Habib finally agreed to my terms, and then I added a condition.

“We will send off the F-5A fighter jets as soon as the first Phantom lands at Daegu Airfield,” I said.

I wanted to see them on Korean soil with my own eyes before giving away the F-5As.

“Why are you so fussy?” Habib complained.

“I’m not fussy,” I replied. “I just don’t neglect our national defense.”

At the end of October 1972, 36 F-5A fighter jets took off from Suwon Airfield for Vietnam and 18 Phantoms arrived at Daegu Airfield later that day. That’s how South Korea became the country with the strongest Air Force in East Asia at the time. Afterwards, we bought additional Phantoms, which served as the country’s main fighter jets for a long time.

A ceasefire negotiation between North Vietnam and the United states advanced quickly and it took effect on Jan. 28, 1973. It was Henry Kissinger who led the negotiations as National Security Adviser. He later became Secretary of State.

After his promotion, he travelled to South Korea. I met him at Gimpo International Airport on Nov. 16, 1973, and brought him to a luncheon with President Park at the Blue House.

Kissinger was well known for his achievements in U.S. diplomacy. He contrived the U.S.-China summit in February 1972 between U.S. President Richard Nixon and Communist Party Chairman Mao Zedong through secret negotiations in 1971 in Beijing.

At the luncheon with President Park, the Harvard graduate looked jubilant because he won the Nobel Peace Prize only a month earlier for concluding the ceasefire in Vietnam.

Kissinger explained the ceasefire agreement concluded in Paris to Park.

“We will support supplies and equipment to South Vietnam to make them stronger. North and South Vietnam will coexist peacefully from now on,” he said.

He must have been very confident bringing peace to Vietnam. I thought he knew nothing about Communism.

Park paused for a moment and said, “Hey, Mr. Kissinger. Do you really think it’s great?”

“South Vietnam is doomed,” Park said bluntly. “It’s the beginning of the end.”

“What do you mean by the end?” Kissinger asked.

“You are saying that you’ve concluded an armistice agreement,” Park said. “But Communists are not the kind of people who keep peace. Once the United States withdraws from South Vietnam, North Vietnam will begin invading sooner or later and South Vietnam won’t be able to stop it.

“South Vietnam presumes it’s safe now and is waiting for aid from the United States, but North Vietnam must be saying unification is near.”

I was awed by what Park said. He also made excellent judgments before the Korean War. In December 1949, six months before the war, Park was working at the Army Headquarters’ intelligence unit. He made a report that accurately projected the time and route of the North’s invasion.

One of the tactics adopted by Communists is “two steps forward and a step backward.” It is how they progress. The ceasefire agreement in Vietnam was North Vietnam’s step backward, giving time for the enemy to take a breath.

Park knew it and Kissinger looked upset that Park was belittling his accomplishment.

“Don’t worry about it,” Kissinger muttered.

It didn’t take long to see who was right. At 10:14 a.m. on April 30, 1975, South Vietnam President Duong Van Minh unconditional surrendered and North Vietnamese tanks broke into the president’s residence in Saigon and hoisted their flag.

Nguyen Van Thieu, Van Minh’s predecessor, was exiled to Great Britain via Taiwan after he tendered his resignation on April 21. It was only a year and half after Park said that South Vietnam was doomed.

About Thieu’s exile, I heard an anecdote from Taiwanese President Chiang Ching-kuo. Thieu flew to Taipei with a Boeing 727 that Chang sent. Thieu arrived with a bunch of gold bars. Thieu asked Chang to exchange them for dollars and Chang agreed.

Thieu lived for a while in England and moved to Boston in 1989. While he lived in London, he lived in a mansion next to that of Sean Connery, also known as James Bond.

South Vietnam’s demise shocked South Korea because a lot of Koreans died fighting in its war. With U.S. support, South Vietnam outnumbered the North in every way. But the people of South Vietnam were divided. They lost the resolution to fight and that was the cause of defeat. It taught us a lesson that we need to be physically and mentally strong to face Communists.

When South Vietnam was being given away in 1974, Habib’s successor Richard Sneider came to me. He said they would give the two battalions of F-5A fighter jets back. He asked for a maintenance cost of $4.1 million.

I told Sneider, “We can’t afford it and we don’t have enough foreign exchange reserves.”

The F-5As came back anyway and we never paid for their maintenance.

In conclusion, we got a Phantom battalion for free.