South starts an operation in DMZ

South starts an operation in DMZ 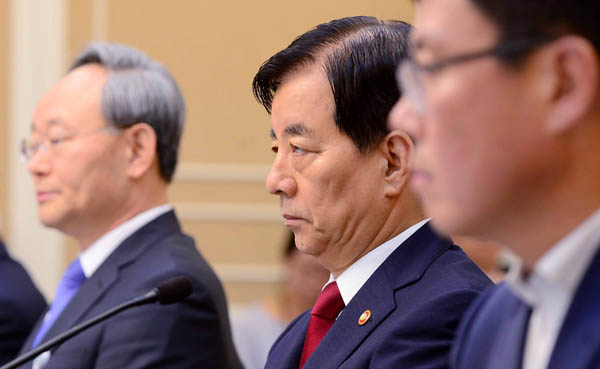 Minister of National Defense Han Min-koo, center, attends a consultation between the government and the ruling party on Tuesday.[NEWSIS]

The operation will use patrol soldiers at the demilitarized zone to trim trees and bushes in the southern part of the DMZ to gain a clearer view of the movements of North Korean solders to prevent infiltrations.

“The DMZ has been a no-man’s land since the [1950-53] Korean War and is filled with dense forests,” an official at the Ministry of National Defense told the JoongAng Ilbo, an affiliate of the Korea JoongAng Daily. “[These forests] often block the view from the observation and guard posts. So we have decided to get rid of them [by cutting them].”

The official, who spoke on the condition of anonymity, said dense forests inside the DMZ made it almost impossible to detect movements of North Koreans.

“Since North Koreans approached our fence [after crossing the military demarcation line] and planted land mines by taking advantage of the blocked view, our decision [to strip the trees and bushes] is one of our countermeasures [against future provocations by North Korea].”

The decision was made after the military determined that North Korean infiltrators crossed the border sometime between July 23 and Aug. 3 using blind spots in the southern part of the border. The explosions of three land mines placed by North Koreans on the southern side of the DMZ near Paju, Gyeonggi, badly injured two staff sergeants. One lost both legs while the other had his foot blown off.

Defense Minister Han Min-koo on Tuesday vowed to strengthen the patrol missions at the border, saying that the South Korea forces would retain strategic dominance at the border area.

Following a closed-door meeting with the ruling Saenuri Party at the National Assembly, the defense chief said the military would deploy strategies to “actively seek dominance in the DMZ.”

The original Paul Bunyan operation in 1976 was one of the tensest times in post-war Korea.

The next morning, Kim Il Sung ordered the North Korean military into battle positions. President Park Chung Hee reached an agreement with U.S. President Gerald Ford to react. On Aug. 21, the UN Command carried out Operation Paul Bunyan, named after an American folk legend lumberjack, to cut down the tree instead of just trimming the branches.

The tree-cutting was accompanied by an enormous show of force by South Korea and the U.S., including nuclear-armed bombers flying overhead.

For the first time since the Korean War, North Korean leader Kim Il Sung sent a message expressing regret for the incident to the United Nations Command, but without directly taking responsibility.

Despite its name, the demilitarized zone - comprised of two buffer zones roughly 2 kilometers (1.24 miles) wide on each side of the border - is one of the most heavily militarized borders on the planet, and each side’s actions are heavily monitored.

Why the North planted the mines is still a mystery.

South Korean analysts say the provocation might have been North Korea showing its disgruntlement over gridlock in a range of inter-Korean issues, such as its demand that Seoul lift economic sanctions imposed in retaliation for the sinking of the Cheonan warship in 2010.

“North Korea may be trying to position itself at an advantage in inter-Korean dealings by reminding Seoul of instability on the Korean Peninsula by committing a low-level provocation,” said Koh Yu-hwan, professor of North Korean studies at Dongguk University, “as it has failed to achieve tangible outcomes from its demands.”