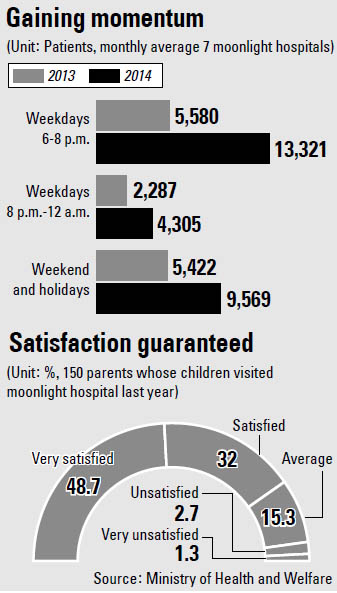 When Ms. Kim’s two-year-old daughter showed a body temperature greater than 38 degrees Celsius (100 degrees Fahrenheit) one summer night, most clinics in her neighborhood were already closed. It was past 9 p.m. in the southern port city of Busan, and the working mom had only two options: race into the emergency room at a general hospital, or visit a so-called moonlight children’s hospital.

Authorized by the Ministry of Health and Welfare, a moonlight children’s hospital is classified as a medical facility that has at least three pediatricians and is open until 11 p.m. during the weekdays, and 6 p.m. on weekends and holidays.

The coveted title comes with an average 180 million won ($1.52 million) in funding from the central and regional governments, and parents laud the hospitals for short wait times and accessibility throughout the entire year.

“You don’t have to wait as long as you do at emergency rooms,” said Kim, whose daughter was treated in just 20 minutes upon arrival on July 3. “I’m free of worries that I might bump into a drunkard, or someone with Middle East respiratory syndrome [MERS], too.”

Emergency rooms were the major transmission site during the MERS outbreak here. More than 80 infections were traced back to the renowned Seoul National University Hospital in central Seoul earlier this year.

Realizing how the new project was gaining momentum among local mothers, the government relayed plans to name more moonlight children’s hospitals around the country, bringing the number up to 15 from the initial nine since September 2014.

But even as the new system was welcomed by rave reviews, not everyone was satisfied. Jealousy rippled through the Korean Association of Pediatric Practitioners (KAPP), whose members were mostly excluded from the government funding, leading the group to ostracize physicians affiliated with the hospitals.

“When my hospital was named a moonlight, KAPP members tried to bury me alive on their online community website [Pednet], saying I was selfishly trying to live on government funding at the price of their own businesses,” said the head of a moonlight children’s hospital, who was among the two establishments that recently decided to drop out of the project.

“It’s hard when the entire group is hating you, pushing you out,” the doctor said, referring to Pednet.

Noting that most of the country’s pediatricians are affiliated with Pednet, a doctor said under the condition of anonymity that it’s hard running a moonlight children’s hospital when candidates of new recruits are afraid to even apply out of fear of retaliation.

“It’s impossible for most pediatricians, who work alone at a clinic, to satisfy the requirements of a moonlight,” said Kim. “Moonlights are vacuuming all the patients away.”