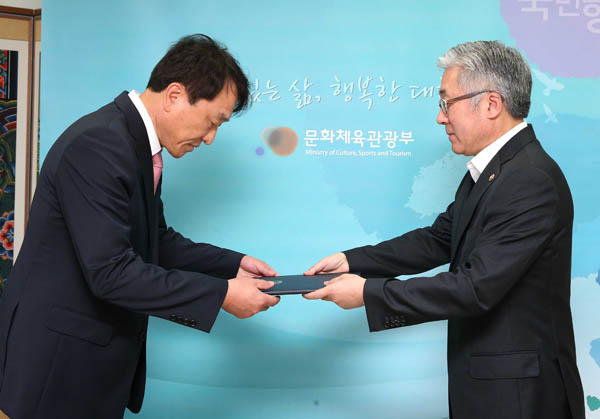 Minister of Culture, Sports and Tourism Kim Jong-deok appoints Chung Chang-soo as president of the Korea Tourism Organization, sparking criticism that this is yet another appointment based on connections. Provided by the ministry

“Personnel affairs is everything” is a cliche in Korean business management, referring to the importance of human resources.

But if that’s the case, Korea’s culture industry is hardly on the right track.

Many of the top government posts in the cultural arena have been vacant for months now. There have been several abrupt resignations, prolonged vacancies and candidates who didn’t make it to appointment. Furthermore, critics unhappy with Minister of Culture, Sports and Tourism Kim Jong-deok’s appointments have blasted the ministry’s handling of personnel affairs.

The irony is that these events come as one of President Park Geun-hye’s key policy directives is “enriching people’s lives with culture.”

And while there may be many reasons for the recent turmoil, critics say a lack of impartiality, transparency and communication within the Culture Ministry is the biggest culprit.

The ministry on Monday appointed Chung Chang-soo - the former president of Incheon International Airport and former deputy minister of land, infrastructure and transport - as president of the Korea Tourism Organization (KTO).

The position has been vacant for four months after Byun Choo-seok abruptly resigned. He resigned in the middle of preparations for Korea’s participation in the Expo Milano in May - an effort he was leading, raising eyebrows in the industry.

With the vacancy, the country’s efforts to attract foreign tourists, who have been staying away from Korea since the recent outbreak of Middle East respiratory syndrome, have been going forward without a leader.

But after the appointment, Rep. Yoon Gwan-seok of the New Politics Alliance for Democracy strongly denounced the Culture Ministry on Sunday, saying that Chung only got the job because he worked on President Park’s election campaign team in 2012.

Even the process of announcing the new president illustrated clear signs of discord or a lack of communication, at the very least.

The ministry on Friday released a press release announcing Chung’s appointment, but only after a Korean daily broke the news in that morning’s newspaper. Insiders say the ministry was going to make the announcement in the afternoon but moved it up due to the news report.

For hours after the ministry released its press statement, the KTO maintained the position to the Korea JoongAng Daily that it hadn’t received “anything official” from the ministry, and therefore could neither confirm nor deny Chung’s appointment. The KTO finally announced the new president about six hours after the Culture Ministry’s announcement.

Yoon, who has been critical of the Culture Ministry’s handling of top posts for months now, says the current situation underlines the ministry’s negligence of its duty.

“It’s unprecedented,” he said in June, referring to the ministry’s tendency to appoint those who share the president’s political inclination to top posts. “By leaving top posts vacant, the ministry is also consistently showing irresponsibility.”

Other positions that have seen long-term vacancies include the top posts at the Korea National Opera and the National Museum of Modern and Contemporary Art (MMCA).

The top post at the MMCA, vacant for almost a year now, is also yet to be filled. The Culture Ministry dismissed Chung Hyung-min in October 2014 amid allegations that she abused her authority and interfered in the recruitment process for museum curators.

The ministry said earlier this month that it will reopen the hiring process starting July. 31. It had concluded on June 9 that none of the candidates who made it through the hiring process, which began in January, were eligible for the post. A ministry official said that’s why they had to make the decision, even though they knew there could be repercussions.

There certainly were repercussions.

One of the candidates, Choi Hyo-jun, alleged to journalists on June 10 that he wasn’t hired because he wasn’t to the minister’s taste, adding that “it is Minister Kim Jong-deok who is unqualified.” Choi was formerly director of the MMCA’s branch at Deoksugung.

To make matters worse, Choi and some other prominent figures in the cultural industry on July 1 formed an alliance and released a statement demanding that Minister Kim resign and the Culture Ministry adopt transparent personnel practices.

“One of the current administration’s policy directives is ‘Flourishing Culture,’ but the Culture Ministry’s activities are anything but that,” Choi said. “This has got to stop.”