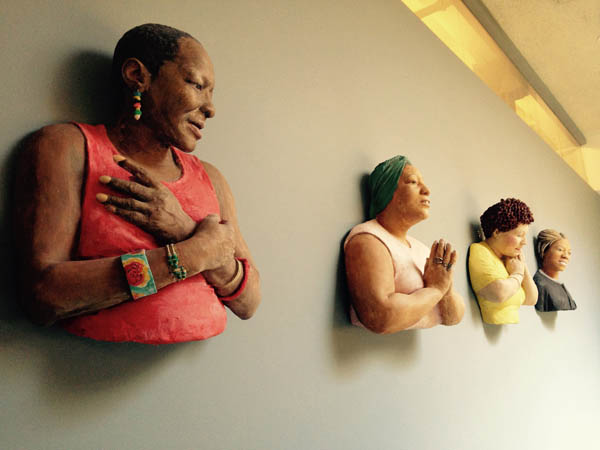 An exhibit installed by No Longer Empty in New York, showing bronze sculptures of women on the wall titled “Ernestine and Three Friends” by John Ahearn, which recently hung in a women’s shelter. [AP/NEWSIS]

No Longer Empty (NLE) is a nonprofit arts group that seeks out empty and underutilized spaces for art installations throughout New York City. But it does more than transform empty storefronts into temporary exhibition space. All its projects relate to the building’s history and its neighborhood.

The group’s holistic approach also involves community participation and discussion months before it comes up with a theme for its site-specific exhibitions.

In most cases, NLE researches and finds the space, but sometimes it’s invited to produce an installation for a group, like the current “Bring in the Reality’’ show with pieces from its earlier exhibitions for the Nathan Cummings Foundation that reflect the foundation’s focus on social and economic justice. Last summer, it presented an exhibition about housing and community at Broadway Housing Communities’ new - but not yet finished - David Adjaye-designed affordable housing complex in Harlem’s Sugar Hill.

The nonprofit got its start in 2009 with an exhibition that responded to the city’s financial crisis.

“Lehman Brothers and everything was collapsing, so there were massive empty spaces around the city,’’ said its founder and chief curator Manon Slome.

She was offered a free site at a former fish-and-tackle store adjacent to the Chelsea Hotel with remnants of marine-like imagery. Artists responded by linking the maritime theme to the notion of a drowning economy.

Slome was then offered a free space in an upmarket condominium in evolving Meatpacking District.

Because it lacked a history like the fish-and-tackle store, “we looked at what it meant to be in a neighborhood in transition’’ with an exhibition titled “Reflecting Transformation.’’

This summer it occupied three floors of the Old Bronx Borough Courthouse that’s been abandoned for 37 years. Twenty-three artists created works that responded to the history of the Beaux Arts building and its role in the neighborhood.

Each installation begins with extensive research. Programming in collaboration with community organizations extends the reach of the exhibitions. For its Old Bronx Borough Courthouse show, NLE asked the district attorney’s office to re-enact a trial with the audience as the jury.

To further bolster the narrative of the neighborhood for visitors, cultural maps of other offerings in the area are printed.

“They helped curate the gathering of other cultural organizations. ... On the opening and closing nights there was a line that went down the block.’’ AP