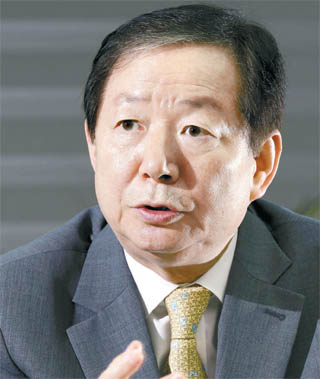 It has been four years since Seoul National University was incorporated. Sung Nak-in, 65, was inaugurated last July as the first president since the university’s transformation.

“It’s about time Korea sees a university that is able to move beyond the government-designated regulations,” Sung said in an interview last month at his office. “Seoul National University would like to take the lead in becoming one.”

Regarding whether there has been changes since the nation’s top elite university was guaranteed autonomy through the incorporation, Sung said there is still a lot of room for reform to maximize the incorporation system, and the university is in the process of creating a “brand new” university.

Born in Changnyeong, South Gyeongsang, in 1950, Sung graduated from the prestigious Gyeonggi High School, earned a law degree from SNU and a doctoral degree from Pantheon-Assas University in Paris.

A theorist in free democracy, Sung has consistently supported adopting a political system that could disperse the power of national leadership, such as the semi-presidential system in France. His favorite phrase is “responsibility lies in where the authority is,” and he believes his alma mater should set a good example in every field - not just academia. His inauguration last year as president came after two failures to be selected.

Q. What changes have been made so far?

A. First, efficiency of administration has been improved. Before incorporation, every budget item had a respective purpose designated. Now, more leeway is allowed to manage capital and more efficient management of the school has been made possible. I reduced the number of my secretaries by two to set an example, and overall the administration has been shrunk by more than 20 staff. Our employees may decide whether they want to remain at SNU or move to a different government organization.

You have been emphasizing “good-natured” people as desirable models for leaders.

Society knows that SNU students are smart. But that doesn’t mean they deserve the love of the Korean public. Good-willed minds and warm hearts should be added to intelligence, and they should have the spirit of sacrifice and volunteerism. They are not supposed to end up as “salesmen of knowledge.” They tend to become leaders of their organizations by the time they reach the age of 40, and they can take care of their team members and business partners with warm hearts. SNU will launch a new lecture titled “Introduction to Humanism” next semester to teach students who they are and how they should live. Next year will see another new lectured titled “Introduction to Happiness.”

Do you plan to change the admission system and school operations to foster such good-natured human resources?

Starting in 2017, we plan to expand the system to assign quotas to students from regions outside of Seoul for the sake of regional balance, which is now confined to a small number of departments. The change will affect entire departments, including art, education and music, and the percentage of the beneficiaries will be 23 percent, or 735, of all students admitted each year. Some applicants from remote islands should be admitted even if they did not attend art high schools. No student should be deterred from getting into Seoul National University because of their poor household situation. The Ministry of Education is trying to decrease the portion the College Scholastic Aptitude Test (CSAT) makes up in the admission process, but I have a different opinion. Those students living in an island but with a good school CSAT score should be able to enter Seoul National University.

Parents say it is getting increasingly difficult for their children to enter SNU.

There is a saying that SNU professors can’t send their children to Seoul National University, but teachers of third-year students at high schools can. That’s because the admission process was too complicated, so we have simplified it. For rolling admission, the screening focuses on school scores and the regions applicants come from for regional balance, whereas CSAT is crucial when it comes to regular admission.

Do you agree with the view that the number students from the three most affluent districts in southern Seoul admitted to SNU are increasing?

Not necessarily. The head of admissions has been visiting various regions, including seven high schools on remote islands, to get in touch with potential applicants. We have 700 undergraduate students from households with monthly average income of 1.2 million won ($1,015) or less. They received scholarships for tuition, but that doesn’t solve their living expense problem. So we have been giving out 300,000 won for basic living expenses monthly to scholarship beneficiaries since March. We also lowered the price of the student cafeteria menu from 2,100 won to 1,700 won in June. I heard students call the menu the “president’s meal.”

What measures do you have in mind to enhance research competitiveness, a major strength of SNU?

SNU’s annual budget stands at about 800 billion won, including the budget from the government. That is less than half of the budget at the University of Tokyo and two-thirds of that at the National University of Singapore. Nobel Prize winners come from those in their 30s and 40s. We should support scholars on a long-term basis so that they can devote their life to research. Boosting financial support for them is a prerequisite. Of course, that should come from national support.

You are president of the university but at the same time a law scholar. Any message for Korean society?

Even in the Warring States period in ancient China, governance based on virtue had prime value, and legal governance took the lowest slot in the hierarchy. There was a time when those who were socially disadvantaged staged demonstrations during the process of democratization in Korea. The law couldn’t properly protect vulnerable members of society but now the law has been fixed. Of course citizens should abide by the law. Now the age of revolution is over and citizens should look toward a mature democracy era based on persuasion and agreement.