Weaker yuan not seen as crisis at current time

Weaker yuan not seen as crisis at current time 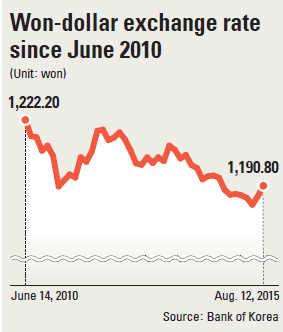 China cut the value of the yuan for the second day in a row, roiling financial markets in Korea and deepening worries about the effect on exports from Asia’s fourth-largest economy.

But since Korea’s won is widely seen as weakening along with the yuan, intervening measures are probably unnecessary for the time being.

“If the gap between the won and yuan widens significantly, there may be moves by the central bank to smooth out the differences,” said Lee Seung-hoon, an economist at Samsung Securities. “But for now, the won is also falling quite sharply, taking a desirable course on its own. If this trend continues, no intervention would be necessary.”

The won fell to its weakest level in almost four years on Wednesday, ending trading down more than 1 percent at 1,190.8 a dollar.

Like most countries in the region, Korea is closely monitoring the currency markets, as China devalues the yuan and the U.S. Federal Reserve gets closer to a possible interest rate increase, raising volatility in financial markets, Minister of Strategy and Finance Choi Kyung-hwan told reporters on Wednesday.

Choi downplayed the yuan devaluation’s impact on the local economy, saying, “If China’s export market picks up, it will be positive for our China-related export businesses as well.” He pointed out that Korea exports lots of components for products manufactured in China.

Analysts widely expect another interest rate cut by the central bank within a year as it tries to prop up a slumping economy and export industries, notwithstanding the yuan’s depreciation.

“The real problem for exporters now is not the weaker yuan, but sagging emerging market economies overall,” said Seo Dae-il, an economist at KDB Daewoo Securities.

He nonetheless added that policymakers will still keep a close eye on the value of the yuan, due to its implications on local export industries. 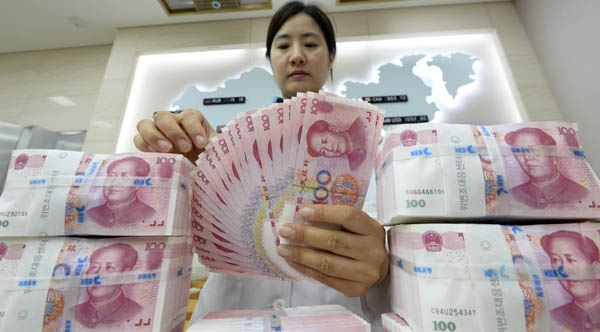 An employee of the Korea Exchange Bank counts Chinese renminbi at the bank’s headquarters in downtown Seoul on Wednesday. On Wednesday, the Chinese central bank once again lowered its currency’s value.[NEWSIS]

“If and when the velocity of the yuan’s fall significantly outpaces that of the won, its repercussions on local exporters and the overall economy could become overwhelming,” Seo said.

In that case, the central bank “would consider a wide array of measures, including rate cuts and currency market intervention,” he said.

Korean stocks dipped on worries of an exodus of foreign money out of the local market and concerns about local exporters being hurt by rising competition with Chinese rivals after the devaluation of the yuan.

Analysts wonder if the devaluation will accelerate an exodus of foreign and institutional investors’ money out of the Korean stock market.

“Foreigners may pull out money more aggressively from both China and emerging markets, including Korea,” said Kim Yong-goo, an analyst from Samsung Securities, by phone, “due to the already appreciating greenback and weakened yuan, which causes them losses when exchanging money.”

However, Kim said the Kospi is not likely to drop any lower than 1,950 in the near future.

“The Kospi will rebound at a faster pace than other economies soon after the oil price drops further and China’s devaluation winds up,” Oh said.

Analysts said auto and auto parts makers will be the biggest beneficiary of the devaluation because they have production lines in China.

Shares in all automakers went up Wednesday.

Local consumer products like cosmetics and food are the biggest losers with the devaluation because their products will become more expensive in China. Cosmetics shares dropped an average 5.2 percent, while AmorePacific was down 6.23 percent.

The travel, aviation, healthcare and shipping industries also shrank by up to 5 percent because the devaluation could make it more expensive for Chinese to come to Korea as tourists.

“Industries that compete a lot with China in steel may be impacted partially and may see losses in operating profits after competing against cheaper Chinese products,” said Kim Dae-joon, an analyst from Korea Investment & Securities.

IT companies that export displays and memory chips are expected to suffer in the China market.

Trade analysts said the Korean government will have to take action on its currency because all local exporters will be facing harsher competition internationally against Chinese and Japanese products.

“The Korean government should consider taking flexible measures like a rate cut because our export dependence on China is so high,” Lee Bong-geol, a senior researcher at the Institute for International Trade at the Korea International Trade Association. “Local businesses should urgently adopt strategies not only in boosting price competitiveness but also in reorganizing their export portfolio to compete against Chinese rivals.”