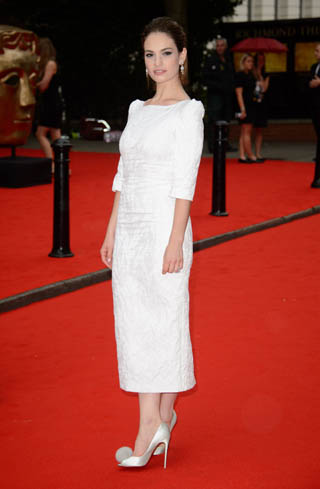 LONDON - Just like its fans around the world, “Downton Abbey’’ creator Julian Fellowes doesn’t seem to be able to let this series go so easily.

The British writer has not even wrapped shooting the last scene for the sixth - and final - season of the wildly successful series, but he is already gunning for a movie.

“I doubt it would be a prequel. I mean, if the movie happens it would be a continuous one with the same people,’’ he said in London Tuesday before a British Film and Television Academy ceremony honoring the series.

“BAFTA Celebrates ‘Downton Abbey’’’ was a chance for the cast members, who finish shooting this week and have already said a number of goodbyes, to have an instant reunion.

Some - like Laura Carmichael, who plays Lady Edith - still have a few days to prepare emotionally for the last “cut.’’

“The last day is Friday,’’ she said. “I’ve already blubbed saying goodbye to different cast members, so I’m sure I won’t be able to speak.’’

Elizabeth McGovern said that she wasn’t as stoic as she thought she’d be.

“I decided I wouldn’t cry, but I did. I shed a few tears,’’ confided McGovern.

Her on-screen husband, Hugh Bonneville, who plays Lord Grantham, took a more practical approach to saying goodbye to cast members he’s worked with for the past six years.

“I finished yesterday along with Michelle Dockery [who plays Lady Mary] and Allen Leech [who plays Tom Branson],’’ he reported, “and we had a pint in the pub to say farewell.’’

The stars agreed they’ll miss the friends they’ve made along the way - and will also hate giving up their cinematic alter egos.

“I will miss being Mrs. Hughes,’’ said Phyllis Logan, “because she’s become part of me for the past six years. So, yeah, I need to hang up the keys and go on for the rest of my life without her.’’

Producers Julian Fellowes, Liz Trubridge and Gareth Neame were presented with a BAFTA Special Award by Julie Walters for the impact the show has had on global audiences. Only the “Harry Potter’’ franchise team got awarded a similar trophy.

“I think this show has quietly waved a flag for Britain abroad as the success of the show has proceeded around the world, so it’s wonderful that BAFTA is saying, ‘We acknowledge that,’ and it’s the end of an era for us,’’ said Bonneville ahead of the ceremony.

The sixth season of “Downton Abbey’’ will start airing in September 2015 in the United Kingdom and in early 2016 in the United States. AP