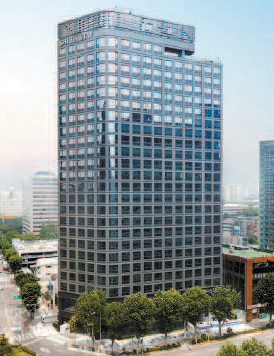 Hotel Shilla plans to open a new branch of its business hotel chain, Shilla Stay, in Mapo District, western Seoul, on Sept. 1. Provided by the hotel

Hotel Shilla, a leading Korean hotel chain, said on Wednesday that it will open a business-oriented branch in Mapo District, western Seoul, in a move that directly competes with a nearby business hotel operated by archrival Lotte Hotels and Resorts.

Located near Gongdeok Station, Shilla Stay Mapo will have 383 rooms, along with amenities such as a bar, fitness center and meeting rooms.

The hotel will be the sixth branch of Shilla Stay, which first opened in Dongtan, Gyeonggi, in 2013.

Dongtan is a newly planned city near Incheon International Airport that is only 30 minutes by car from Gangnam.

Other locations include Yeoksam-dong, southern Seoul, and Seodaemun, central Seoul, as well as elsewhere in Korea such as Ulsan, South Gyeongsang and Jeju Island.

Shilla Stay Mapo is only 240 meters (790 feet) away from Lotte City Hotel Mapo, run by Lotte Hotels and Resorts.

The hotel’s Mapo branch was designed by Italian architect Piero Lissoni, who is known for his minimalist style.

The 26-story building has a large buffet restaurant named Cafe that seats over 100 and converts into a lounge bar at night.

The hotel also features a conference hall on the first basement level that can accommodate up to 100 people.

Shilla expects the Mapo District branch will be popular with travelers and businessmen because of its convenient location.

The hotel is near Gongdeok Station, which serves Seoul Subway Line 5, Line 6, Gyeongui Line and the Airport Railroad Express line that travels from Incheon International Airport to Seoul Station.

The district is also close to major business districts such as Yeouido and downtown areas like the hip Hongik University neighborhood.

Shilla Stay will open in more regions across the country by 2016, including Seocho District, southern Seoul.

During the special promotion period running through September, the basic package for one night at Shilla Stay will cost 189,000 won for two people.