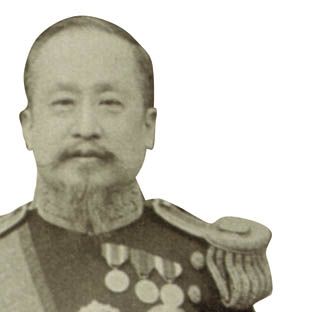 But academics are reevaluating Gojong’s diplomatic efforts before his abdication in 1910, which included writing letters to leaders of world powers, dispatching special envoys, subscribing to international organizations and attempting to establish a government in exile.

Even in a situation in which his political rights were restricted, Gojong is seen as having employed diplomatic strategies that are still used by countries today.

An excerpt from a 10-page letter written by Emperor Gojong to Czar Nicholas II of Russia dated Aug. 22, 1905, declaring that Japan’s move to take away Korea’s independence was illegal. [JoongAng Ilbo]

“The Korean Empire is an independent nation that holds a 4,000-year history, while Japan was founded as a nation between 1200 and 1300. Many of Japan’s customs originated from our country, and [Chinese] characters were also taught by our country’s people. The Japanese respected our country like we were their ancestors, and would never have dared to make a hostile relationship with our country.”

A copy of the letter was obtained by the JoongAng Ilbo, an affiliate of the Korea JoongAng Daily, from Choi Deok-kyu, a researcher from the Seoul-based Northeast Asian History Foundation, who retrieved it from Russian archives.

While there were records that Gojong sent letters to Russia, this is the first time the contents of such letters have been revealed to the public.

The 10-page letter from the Korean emperor was written in Russian, and a stamp indicates it is an officially certified document of the Russian government.

However, it is unclear if Gojong sent the letter in Russian or if it is a translation by Russia of the original letter’s Chinese characters.

From the start of the 20th century, Gojong reached out to world powers through letters to promote Korea’s neutrality at a time when Russia and Japan clashed in their imperialistic ambitions over Manchuria and Korea.

On Nov. 23, 1903, three months before the Russo-Japanese War broke out in February 1904, Gojong declared, “Should a war between Russia and Japan break out in the future, our country will declare our neutrality.”

On Jan. 16, 1904, Gojong sent a letter that contained Korea’s proclamation of neutrality to Italy and other world powers. Because Japan was regulating Korean telegraphic service, Gojong sent a special messenger to Zhifu in Shandong province, northeastern China. The letter was then dispatched by the French consul at the port to each country.

The Russo-Japanese War (1904-5) ended with Tokyo’s victory, affirming the Japanese presence in south Manchuria and Korea and ceding the southern half of Sakhalin Island to Japan.

The Japan-Korea Treaty of November 1905 made Korea a protectorate of Japan.

In his letter to the Russian czar, Gojong also wrote, “Japan is viciously and harshly seizing sovereignty of our country. Currently, our country is under such sad circumstances because we are weak and cannot defend ourselves and cannot protect our rights. Even so, we have declared numerous times that we are an independent nation. Japan right now is clearly trying to annihilate our independence by ruling over our country, which is illegal.”

“Despite Gojong’s efforts, in September that year through the Treaty of Portsmouth [which ended the Russo-Japanese War], Russia recognized Japan’s claims to the Korean Peninsula,”Choi said. “And a pro-Japan administration took power to keep Emperor Gojong in check.”

He continued, “From then on, Gojong was forced to utilize his personal aides and organized groups to enable his diplomatic policy.”

Gojong also wrote letters to appeal to countries to nullify the 1905 treaty.

Consequently, Russia told its ambassadors in London, Vienna, Rome, Washington and Berlin to make public that the Korea-Japan Treaty of 1905 was illegal.

However, most Western countries took Japan’s side. The exception was France.

In June 1906, Gojong sent letters to nine countries to help raise the issue in international courts.

“It was problematic that he focused too much on gaining security through foreign powers, but the amount of Gojong’s diplomatic activities, confirmed through foreign diplomatic documents, was massive,” said Hyun Kwang-ho, a history professor at Korea University. “He met with foreign envoys dispatched to the Korean Empire nearly everyday. Such efforts by Gojong are often discounted.”

Korean diplomatic documents also show that Gojong was very active in joining international organizations. In 1901, he received an agreement from Geneva to be allowed access to the Red Cross in the case of war. In October 1902, he dispatched Min Yeong-chan, an envoy to France and Belgium, to the Red Cross.

The Korean Empire signed Geneva Conventions I and II in 1903, an indication that the organization recognized Korea as an independent, sovereign nation. Gojong established the Red Cross Society in Korea in 1905. A part of the society moved to Shanghai, where the provisional government was established in 1919, but the remaining was downgraded as the Japanese Red Cross Society’s branch in Korea in 1909.

Korea tried to join the Hague Peace Conference as well. In August 1903, Gojong sent Min to meet the Dutch leader to speed up the process. In 1904, a new envoy was encouraged to visit the Permanent Court of Arbitration and the Peace Conference at The Hague. However, the court was in recess at the time.

The emissaries were tasked with emphasizing the independence of Korea from Japan. But they were prevented from taking part in the conference.

Even after his forced abdication in 1910, Gojong did not curb his anti-Japanese diplomacy. In June 1910, he sent his aides to Russia to relay his intention to form a provisional government.

According to a report of a Russian commercial envoy in Shanghai, Gojong sent a message that he would like to go into exile in Vladivostok, where he could get help from Lee Beom-yun, the administrator of Gando, now a part of the Yanbian Korean Autonomous Prefecture in Jilin province, northeastern China, and the army in Hamgyong province. A government in exile organized by a group of independence activists was in the works in 1918.

But the plans fell apart after Gojong’s sudden death on Jan. 21, 1919, at Deoksu Palace.

“Gojong engaged in ‘trust diplomacy’ and ‘honest diplomacy’ in the belief that if we showed our sincerity, opportunities could be gained based on the principles of Confucianism,” said historian Lee Tae-jin, an emeritus professor at Seoul National University and former president of the National Institute of Korean History.