Trying to avert a tragic end for Syngman Rhee

Trying to avert a tragic end for Syngman Rhee 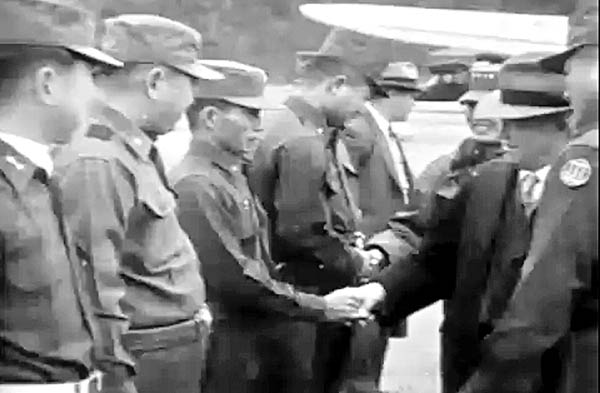 July 19 was the 50th anniversary of the country’s first president Syngman Rhee’s passing away. After he stepped down during the April 19 Revolution in 1960, a democratization movement led by labor and student groups, he went into exile in Honolulu and lived there for five years. He passed away on July 19, 1965, at Mauna Lani Nursing Home with his wife Franziska Donner and son Rhee In-su at his side.

In November 1962, when I was serving as director of the Korean Central Intelligence Agency (KCIA), I was invited by the U.S. Department of State and U.S. Central Intelligence Agency (CIA) to Hawaii. After I landed at Honolulu Airport, I laid a flower on the USS Arizona, the battleship that sank during Japan’s attack on Pearl Harbor, and paid a visit to Rhee. He was at a nursing home, a three-story pink building next to Waikiki Beach. Rhee was in room No. 202.

When I came in, Rhee was groaning on a shoulder-high bed, eyes closed, with casts on both arms suspended from cables attached to the ceiling. Mrs. Donner, a frugal woman, was standing next to him with teary eyes wearing a cheap-looking dress.

“What happened to the President?” I asked. 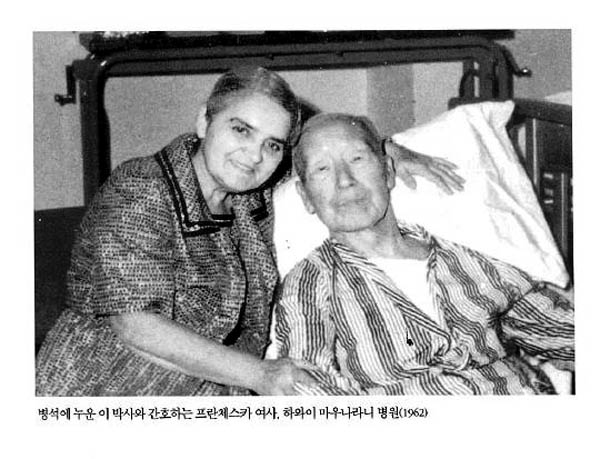 Syngman Rhee, right, and his wife Franziska Donner pose for a photo at the Mauna Lani Nursing Home in Hawaii in 1962. [JoongAng Photo]

Donner said Rhee tried to get out of bed, saying, “Why am I here? Let’s go to Seoul. I’m going to Seoul,” and injured himself falling off the bed.

I looked at his face for a while. He was an old man, nearing 90, with a pained looking face. I took $20,000 in cash out of my pocket, money Park Chung Hee, Chairman of the Supreme Council for National Reconstruction, gave me before leaving Seoul.

Park said, “It wouldn’t be enough if I give 10 times this amount, but take this at least to Mrs. Donner.”

Still, $20,000 was a large amount at the time. Mrs. Donner took it and burst into tears. That was the first time I saw tears in her blue eyes. Rhee and Donner had a difficult life in Hawaii. They had no income. Wilbert Choi, a Korean-American who worked with the independence movement under Japanese colonial rule, was taking care of the old couple, but couldn’t give much. Mrs. Donner, the former first lady of a country, lived like a pauper.

When he handed me the money, Chairman Park told me, “Go to Hawaii and try to bring Rhee back to Korea. If Dr. Rhee is coming back, you take good care of him.”

I told the American director of the nursing home, “I wish to bring President Rhee back home. He wants to go back and the leader of the country wants him back as well.”

But the director didn’t agree.

He said, “If he gets on a plane, he will die. He needs to stay here and rest for a long time.”

Returning to my hotel, I called Park and explained the situation. Park didn’t say a thing for a while.

“Is he that bad?” he said. “Take good care of him anyway and tell him I will bring him back to Korea as soon as I can.”

But Rhee’s condition deteriorated. Ultimately, he returned to Korea in an urn. A U.S. transport plane carrying his remains landed at Gimpo Airport on July 23, 1965. President Park received it with National Speaker Rhee Hyo-sang, Chief Justice of Supreme Court Jo Jin-man and Prime Minister Chung Il-kwon. I was in the United States at the time.

It was once rumored that Park stopped Rhee from coming back to Korea, but that was totally untrue. Park wanted Rhee back in South Korea and tried to make it happen. The government, media and leaders of the April 19 Revolution didn’t want Rhee back, but Park and I weren’t among them. Park thought Rhee was a founding father of the country and wanted to bring him back at a proper time. That was at the end of 1962.

Rhee was a patriot with modern thinking, who wanted to make South Korea into a liberal democratic country. When Korea was liberated in 1945, he was already 70 and he became the first president three years later. At that time, average life expectancy for Korean men was 43 years.

People often compare Rhee to Kim Gu (1876-1949). They had different thoughts on the country’s future. Kim was more of a romantic nationalist.

Kim used to say, “If we talk to Kim Il Sung, why can’t we reunite the two Koreas?”

Kim Gu was later invited to visit North Korea and met Kim Il Sung in Pyongyang in April 1948 but came back empty handed.

Then North Korea severed the electricity supply from its Supung Power Plant. At that time, the North was supplying 70 percent of the South’s electricity. North Korea also cut off the water supply to the Yeonbaek Plain in Hwanghae Province.

Rhee took a very different tack. “It is not enough just talking to Communists like Kim Il Sung,” he said. “We need power and need to be stronger than the North.”

We were able to resist the 1950 invasion because the president had such a strong attitude against North Korea.

Rhee tapped the four stars on the shoulder of the 78-year-old general and said, “I gave you these to win the war, not to make you offer your signature for surrender.”

Clark answered, “I’m a soldier and I follow orders.”

There is another interesting anecdote from 1957. President Rhee called General Paik Sun-yup, who was 37 years old, to his residence. Joint Chief of Staff Chung Il-kwon was there, too. Paik, who was heading the 1st Corps of Korea, was wearing a uniform and Chung was in a ceremonial dress.

Rhee pointed at Chung’s shoulder and said, “One, two, three, four. What is the four-star rank?”

Rhee asked again, “Is there a higher rank than that?”

Chung said, “There is. Five stars means the head of state.”

“Who is the head of state?” Rhee asked.

Rhee went to Paik and asked, “Whom are you receiving orders from?”

“The UN Commander gives operational orders and Army Chief of Staff gives me administrative orders,” Paik replied. “The general standing next to me is my boss as well.”

“Really?” Rhee asked. “So you are saying this man is higher than you, right?”

The president took a few steps as he thought and told Paik, “Then you become [Army Chief of Staff]. That’s it. Did I make myself clear? Get out.”

That’s how he named a new Army Chief of Staff, and it shows how Rhee took control of military leadership.

Rhee had his dark side as well as seen in the dictatorship of his Liberal Party, fraudulent elections, the student movement and their sacrifices. The April 19 Revolution was a stain on his political career. But it is not right to measure all those things using standards of today and deny other parts of the past. Back then, Rhee did the best he could based on the standards of the time. If there wasn’t the past, there wouldn’t be the present.

What we should do is to consider the faults of the past as lessons to make our present life better.