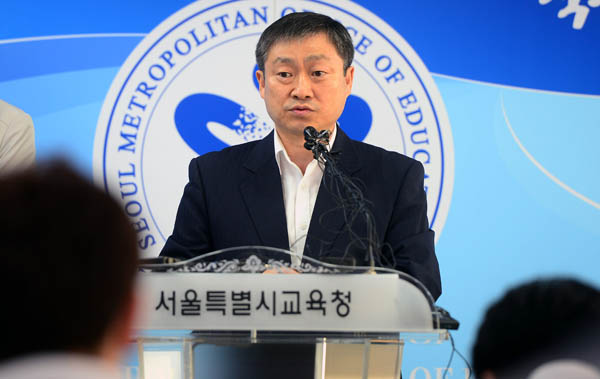 Deputy Superintendent Park Baek-beom of the Seoul Metropolitan Office of Education announces Wednesday that the Board of Audit and Inspection will be asked to investigate accusations against one of its inspectors. [NEWSIS]

The inspector in charge of investigating allegations of sexual assault at a public high school has been accused of getting drunk on the job and abusing his own subordinates.

Inspector Kim Hyeong-nam of the Seoul Metropolitan Office of Education is now leading the investigation of a public high school’s principals and four other teachers, who allegedly sexually harassed and assaulted about 130 female teachers and students.

But the inspector himself became embroiled in controversy when he apparently drank before questioning four female teachers on July 26. A secretary and supervisor at his office reportedly refused to attend the questioning session because Kim was intoxicated.

The conflict peaked earlier this month, when Kim’s subordinates insisted that Kim would verbally abuse after drinking. One accused Kim of sexually harassing her.

Kim fired back, saying his subordinates had concealed information from him during ongoing cases, including at the public high school.

The education office announced on Wednesday that it is planning to request an inspection from the Board of Inspection and Audit (BAI) about the allegations.

“We’ve decided to request an official inspection to help find a solution,” said Deputy Superintendent Park Baek-beom. “We planned an internal investigation, but decided to make it public to ensure fairness and objectivity.”

The office announced Monday that it was starting an internal investigation with some outside experts to ensure fairness, but decided to make it public just two days later because Kim was apparently uncooperative.

“Inspector Kim refused to file related data or be investigated, saying there is no reason for him to be questioned by the office,” said one of the outside experts, Lee Ji-mun, who is the director of whistle-blowing organization Insiders.

The education office said he is “still supervising the inspection and reporting progress to the superintendent and deputy superintendent.”

The Seoul Education Office denied claims that it is inappropriate for an inspector accused of abuse and sexual harassment to lead an investigation into similar claims.

“We think there won’t be a huge problem with Kim inspecting the high school and we are not planning to replace him at this point,” said Deputy Superintendent Park.