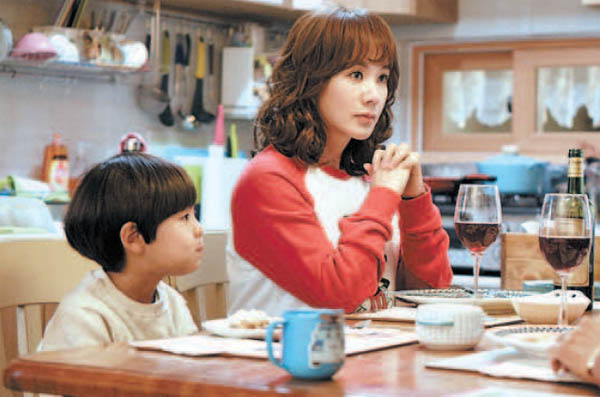 Yeon-woo (Uhm Jeong-hwa) is a successful lawyer who always knows how to win big trials.

Just before earning a transfer to a main office in New York, she suddenly faces death in a car accident.

Hovering between life and death, she meets an unknown man called Chief Lee (Kim Sang-ho) in the celestial world who overlooks lives on Earth.

It turns out that one of his employees made a major error, mistaking Yeon-woo for someone else. Chief Lee suggests sending her back to Earth, if she promises to live a month as another woman - only that woman is a housewife with two children and a husband.

Alive again, Yeon-woo is very confused and even frustrated having to live a life with humbler means, preparing breakfast every morning instead of going to work.

Her abrupt husband, Seong-hwan (Song Seung-heon), is what every woman hopes for, being “unnecessarily handsome” and even providing infinite love and trust for his wife. But his modest income as a civil servant also dissatisfies Yeon-woo.

The film has been anticipated by many since the multitalented Uhm Jeong-hwa and top star Song Seung-heon will share the screen as a catastrophic couple.

By presenting a touching family story, director Kang Hyo-jin not only provides laughs but also conveys a meaningful message about family values.

Comedy-action film “Veteran” is the quintessence of what director Ryoo Seung-wan can do well.

It merges action, which is Ryoo’s specialty, with a hefty dose of comedy, which Ryoo is also known for doing well.

His latest film follows a simple plot, depicting a fierce conflict between a hardheaded detective and a spoiled young millionaire.

A predictable plot line and something that we’ve seen before, but when the lead roles are taken on by skilled actors like Hwang Jung-min, Yoo Ah-in, Oh Dal-su and Yoo Ha-jin, it becomes a different story.

Detective Do-chul (Hwang), a leader of a five-member regional investigation unit, one day comes across the absurd and violent acts of Tae-oh (Yoo Ah-in), a millionaire tycoon, who is young and very arrogant.

Do-chul, a particularly merciless detective when it comes to unjust crimes, immediately senses that Tae-oh is the de facto assailant in a recent mysterious case.

Although Tae-oh always slips through with the help of his wealth, abundant connections and his capable right hand Sang-moo (Yoo Hae-jin), Do-chul doesn’t give up.

And when he finally corners Tae-oh with nowhere to hide, he goes mad, leading to the final showdown in the middle of Myeong-dong, central Seoul.

Including a fierce car-chase, followed by a bare fist fight, it shows both actors’ explosive energy as well as Ryoo’s skillful take on action sequels.

But it is not like Su-nam was this way from the beginning, as the film reveals.

Su-nam enrolled in a nice university and acquired more than 10 licences, such as in abacus calculation, bookkeeping and typing.

She expected a bright future ahead of her, but her licenses became useless once computers came along.

All the more, her mundane appearance is insufficient to get ahead in the looks-obsessed society.

Nevertheless, Su-nam marries her co-worker at a factory. The couple’s life has ups and downs, but Su-nam continues to work harder and harder to get a house and eke out an ordinary life.

However, as greater challenges continue to arise, Su-nam realizes that a good heart and hard work are meaningless in today’s society.

She becomes furious and begins to change into a spiteful woman.

By showing diverse types of people like the opportunist, the petite bourgeois and the civil servant who exploits workers, the film tries to reveal how society has come to be this way.

Noted for bearing meaningful messages in a “funny, shocking and sometimes brutal” way, the film has won the Korean Grand Prize at this year’s Jeonju International Film Festival.

Nolan Mack (Robin Williams) is a devoted husband who pursues a peaceful and mediocre life with his wife Joy, (Kathy Baker).

One day, when he was driving his car, he unintentionally meets a young man named Leo (Roberto Aguire).

Since then, his extremely ordinary life turns into a life full of secrets that cannot be revealed to his wife.

Although Mack truly loves Joy, due to his new homosexual identity he begins to anguish over whether to maintain his life as a husband or to pursue his ideal life. At last, Mack chooses to go for a new life.

Throughout the film, Mack’s somewhat boyish character, such as feeling happy while having a conversation with the man he likes, can be spotted occasionally. In the early part, he also stares at a male couple even when he hears about his promotion at work.

The film has been in the spotlight as it stars famous Hollywood actor Robin Williams, who killed himself last year. As ever a great actor, Williams successfully expresses Mack’s reversal of his life while already in his 60s.

The 95-minute film won the Silver Lion award at this year’s Venice Biennale.

In his latest work, Im puts the lives of female factory workers in the center, revealing how the plight of workers here hasn’t changed much over the years.

Although their time working in factories is now over, the women’s daughters now work as contract workers, as supermarket clerks or call center employees.

In spite of the possibility of better working conditions resulting from technological developments, these workers are still living disadvantaged lives of poverty.

By interviewing these workers, the film covers about 40 years of the lives of female workers who have worked hard to live, to provide for their families and to achieve their dreams.

Meanwhile, “Factory Complex” is not only about the poor working conditions of factory workers in Korea, but also reflects the situation in Cambodia and Vietnam where young women still labor in factories.

Through this rather disheartening film, Im asks the audience to understand the pain and anxiety of the modern condition.

He also shows about how neoliberalism and capitalism have affected modern society.