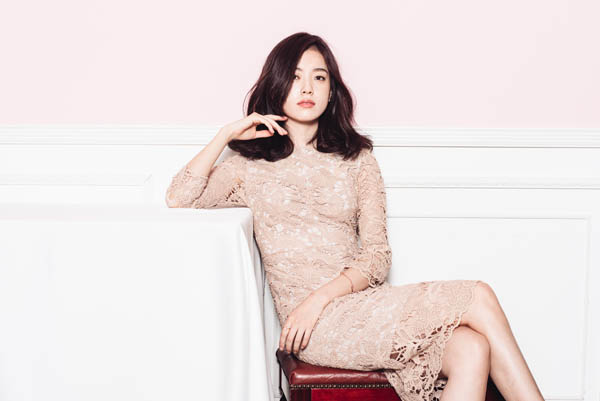 
For actress Han Hyo-joo, the filming of “The Beauty Inside” was an unusual experience. She did romantic scenes with 21 different actors and filmed kissing scenes with 13 of them in the new movie, which opens Aug. 20.

The upcoming motion picture tells of a love story between Yi-soo, played by Han, and furniture designer Woo-jin, who wears a different body everyday.

“It felt very fresh and unique,” Han said in a recent interview with Ilgan Sports, an affiliate of the Korea JoongAng Daily.

“I didn’t think I could ever work with so many actors in one piece, and because the chance to do such work might never come to me again, I decided to join. It was a very unique experience I will never get to do again.”

Q. What was your own review of the movie when you watched the completed version?

A. Personally, I’m satisfied. I joined the movie because I was thinking that I would have wanted to watch this type of movie, and I think the movie is depicted beautifully as I expected. I’m satisfied that the movie signals the arrival of an unseen movie genre.

What was it like to work with 21 different actors playing Woo-jin?

Surprisingly, none of them was someone I was close with. I met them for the first time through this movie. I’m usually shy, but it was easy for me to feel emotions for the character, and they all looked very lovable. Maybe it was because I was so into playing Yi-soo, or maybe I got used to the production of this particular movie.

What message does the movie intend to deliver?

As you can see from the title, it focuses on inner beauty. I think the movie carries a very philosophical message which makes you think more about true love. I think I became a philanthropist after filming this movie.

I don’t really fall in love fast. My heart grows as I see the person more. I haven’t been in a relationship for a while. Now is the time to rest from it. I think I always put my work above love when I was in a relationship. Because I never really sacrificed my work for someone, I want to feel that love. I don’t really have a physical type that I like. I just see the charm the other person has.

In the movie, the character you play overcomes her difficulties with love. Can you empathize?

It depends on what put you into feeling such difficulties. If I’m hurt because I love someone, that can be overcome with love. But when I am physically tired, I need to sleep. When I am mentally struggling, I usually focus on doing what I usually like to do.

Why do you think the audience should watch this movie?

It is different from blockbuster movies that come out in the summer. I think this movie can warm your heart up. The movie makes you question who you are but never gives a clear answer. The aftertaste remains until the next day after you watch this movie, and you keep asking the same question over and over.