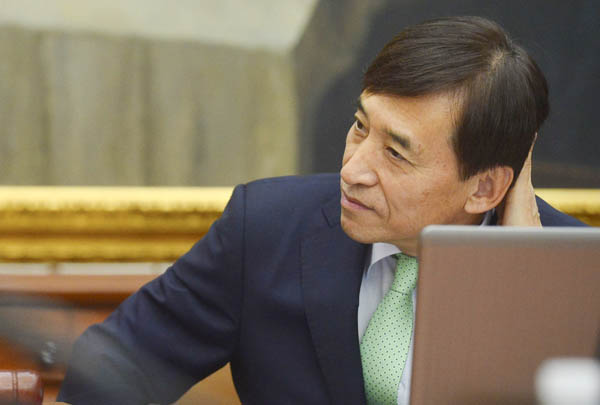 The Korean central bank maintained its conservative stance by freezing its policy rate at the record-low 1.5 percent for the second consecutive month on Thursday, while the Chinese central bank devalued the renminbi for the third consecutive day, further deepening concerns over its impact on the Korean economy.

A majority of market experts, however, are betting the Bank of Korea (BOK) will hold the policy rate steady through the remainder of this year as BOK Governor Lee Ju-yeol will likely take a wait-and-see approach on earlier rate cuts. However, the possibility of another rate cut has not been taken off the table.

On Thursday the People’s Bank of China once again devalued the renminbi 1.11 percent against the U.S. greenback from Wednesday’s close to 6.4. In the last three days the Chinese currency has fallen 4.66 percent.

The impact of the third devaluation on the Korean market was not as severe as in the first two as the Seoul main bourse bounced back after gaining 0.4 percent from Wednesday’s close to end the day above 1,980. It was the first turnaround in six trading days. The won appreciated against the dollar.

While remaining cautious, the Korean central bank governor acknowledged the growing risks in the current economic environment, saying it would closely watch any effects of a monetary policy shift in the U.S. as well as the devaluation of the Chinese yuan.

“We are not ruling out potential risk factors, and we have set up measures for various scenarios [in the event of a crisis],” said BOK governor Lee Joo-yeol.

“The currency rate is fundamentally determined by the market and reflects the country’s state of the economy. However, excessive fluctuations and acceleration of currency rates in a particular direction is not desirable,” Lee added.

Market analysts say the BOK will probably keep the key rate steady for the remainder of this year, as it is likely to take a cautious approach to upcoming developments in both domestic and international economies.

“Unless we see drastic volatilities in the Chinese forex and equities markets, or the Chinese economy shows real signs of deeper troubles, another rate cut is probably not going to happen this year,” said Park Jong-yeon, a fixed-income analyst at NH Investment & Securities.

Some analysts downplayed concerns over the yuan devaluation.

“Personally, my view is yuan devaluation is not all that bad news for us,” said Park Jung-woo, an economist at Korea Investment & Securities.

“If Chinese exports and [its] economy benefit from weaker yuan, that will translate as positive developments for the Korean economy as the country is a major export destination,” he said, adding that “as long as the degree of devaluation is within a reasonable range it is not likely to become a serious issue for Korea.”

There were also views the BOK may be overly optimistic in its view of the Korean economy, and pressure to cut the rate may be impending.

“BOK policy statements have come to be characterized by a seemingly perpetual expectation that economic recovery is just one quarter away,” BNP Paribas said in its report on Thursday, issued shortly after the rate decision and press briefing.

The BOK on Thursday reiterated its forecast for Korea’s full year growth rate of 2.8 percent.

Earlier last month, it stated the country’s second quarter GDP had expanded by a mere 0.3 percent, below the 0.4 percent forecast earlier by the central bank.