For two Koreas, 70 years of divergence

For two Koreas, 70 years of divergence 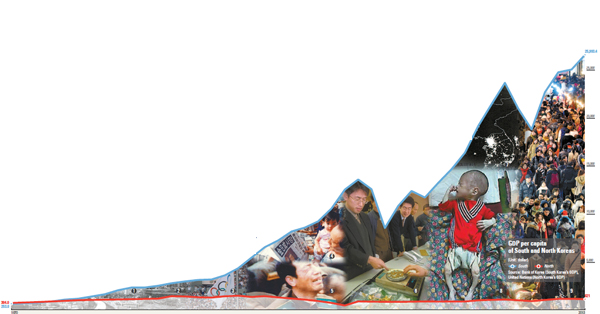 1. View of the Cheonggye overpass in central Seoul in the 1970s. 2. Hyundai Apartments surrounded by farmland in Seoul’s Apgujeong neighborhood in the 1970s. 3. Seoul hosts 1988 Summer Olympics. 4. A South Korean reads news of North Korean founder Kim Il Sung’s death on July 8, 1994. 5. A North Korean cries upon hearing the news of Kim Il Sung’s death the same day. 6. South Koreans collect gold to overcome the foreign exchange crisis in 1997. 7. A 2003 satellite image of the Korean Peninsula at night. 8. A North Korean boy suffers from starvation during the Arduous March of the mid-1990s. 9. Seoul’s bustling Myeong-dong, a must-visit destination for foreign tourists. [JoongAng Photo]

One of the most remarkable photos of the planet Earth from space shows the Korean Peninsula at night. The section above the 38th parallel is completely dark except for a pinprick glow around Pyongyang, the capital of North Korea. The southern part - modern South Korea - looks like the Milky Way.

From the perspective of today - the eve of the 70th anniversary of Korea’s liberation from Japanese colonization and the start of the division of the peninsula into two parts - North and South Korea would appear to share nothing but a distant past, a language and the name “Korea.” The North is as close to a failed state as imaginable, living on handouts from ally China.

In recent decades, the North has lost millions to starvation and many of its people suffer from pellagra, a vitamin deficiency disease that affected Native Americans in the days of General Custer, because they eat little more than corn. In contrast, South Korea has the 15th largest economy in the world and a growing obesity problem.

North Korea is governed by the world’s only hereditary communist dictatorship, which has survived 69 years against all predictions. South Korea, after living under dictators for 27 years, became a democracy in 1988.

But North Korea wasn’t always the bedraggled rogue state and South Korea the obvious champion. For the first few decades of the post-war period, it wasn’t clear at all which of the countries, their systems or their patrons - Russia and China for the North and the U.S. and its allies for the South - would come out better. When North Korea suffered droughts and famine in the mid-1990s - its so-called Arduous March period - up to three million people died and a trickle of defectors to South Korea became a steady stream.

But within a few years, South Korea fell on its own arduous times. The 1997 Asian financial crisis exposed the clay feet of the large family-run companies known as chaebol. As in 1929 America, the crisis appeared to signal the complete failure of Korea’s unique version of capitalism.

In commemoration of the 70th anniversary of Korea’s liberation from Japanese colonial rule, the Korea JoongAng Daily looks back on seven decades of trials and errors, successes and failures in the two Koreas.

The three-year war on the peninsula left all of Korea in ruins. Coming out of the war, however, North Korea managed to operate its economy impressively, thanks in part to generous economic and technical assistance from so-called fraternal socialist countries, mainly the Soviet Union and China. State-led mobilization of labor under its one-party system ensured the North’s economic growth rates into the 1970s surpassed South Korea’s. It was also true that during their 36-year colonial rule, the Japanese concentrated industry in the north of the peninsula, where there were more natural resources like coal and mineral deposits, and used the south for farming.


From the start, the economic advantage was held by the Democratic People’s Republic of Korea (DPRK), the official name of North Korea.

An estimate drawn up by the Soviet Union in 1960 titled “The Economy of the DPRK,” now accessible from a digital archive at the Woodrow Wilson Center in Washington, D.C., said, “The volume of industrial production in the DPRK during the five postwar years grew at an annual rate of 42 percent, and in 1959 by 53 percent.”

Charles Armstrong, professor of Korean studies at Columbia University, wrote in an article, “In the late 1950s, North Korea’s rate of [growth in] total industrial output (averaging 39 percent between 1953 and 1960) was probably the highest in the world.”

Data by the United Nations shows North Korea’s per capita GDP remained higher than South Korea’s through 1973, a full 28 years after the division of the peninsula.

When Huh Shin-sook, 54, recalls her adolescent years in North Korea, she thinks of candy.

“I remember going to state-owned grocery stores with my mom, picking out candy and other sweets from the shelves with a big smile,” said Huh, who had a career as an obstetrician in the North before defecting to the South in 2011.

“Those state-managed stores made up for the shortfalls in the food ration system. Those years in the 1970s until the mid-1980s were good ones. We may not have had an abundance of food. But everyone managed to get by. No one starved and everyone I knew was grateful to [North Korea founder] Kim Il Sung.”

Such fond memories of childhood are echoed by Mr. Lee, who fled North Korea in 2010. Lee, 55, asked that his full name not be used out of concern for the safety of his family still in the North.

“Everyone was grateful to Kim Il Sung when I was young in the 1970s because no one starved back then,” said the North Hamgyong native, who worked as a miner following 10-year mandatory military service in North Korea’s one million-strong army from 1976.

“As far as I could tell, no one complained about the regime when Kim Il Sung was in power because everything was paid for and provided by the government, such as education, medical treatment, jobs and food.”

In contrast, many South Koreans bitterly recall the poverty of the post-Korean War years. In 1953, South Korea was as poor as Ghana and instead of rice, Koreans were eating bark off the trees.

South Korea’s economy seemed hopeless with the corrupt, visionless leaders of the post-Korean War period. The majority of the peninsula’s natural resources, electric power and mining operations were in the North.

But when Park Chung Hee took power in a 1961 coup, he had a concrete idea of what Korea could become and the ambition to make his vision a reality.

Park knew that labor-intensive manufactured products were perfect for South Korea because of its abundant labor force. Thanks to its successful adoption of labor-intensive industry with an emphasis on exports, its GDP per capita rose from $84 in 1961 to $253 in 1970, according to the Bank of Korea. Despite the South’s fast pace of economic growth, the North maintained its lead against the South until 1974. In 1973, the North’s GDP per capita was $477, $71 more than the South’s $406.

There was a price to be paid for economic progress in the South, and it was extracted from factory workers in the form of sweat, tears and sometimes blood. In the 1960s and 1970s, it was common to see girls fresh out of middle or high school working behind sewing machines at factories - and working both days and nights. Dictators are rarely fond of unions or any kind of workers’ rights, especially dictators with the kind of ambitions Park Chung Hee had. Blatant violations of labor laws were tolerated by the government - anything to increase exports, exceed the five-year plan and contribute to Korea’s economic success.

Rep. Chun Soon-ok of the opposition New Politics Alliance for Democracy was one of those girls who worked at a sweatshop garment factory in a slum in central Seoul. She was 16.

“When I was in elementary school, there were many days I couldn’t bring a lunch box because my family was so poor,” Chun recalled in an interview in her National Assembly office. “I felt like my friends whose fathers had gone to Vietnam as soldiers or businessman [doing business related to the Vietnam War] had fared much better. They had lunch boxes everyday.

“There was an absolute sense of poverty permeating everyone’s mindset,” the lawmaker noted. “Everyone suffered from poverty except for a very few. I began working as a garment worker after I graduated middle school.”

A year before Chun started working in the sweatshop, her older brother Tae-il became one of South Korea’s most famous martyrs for workers’ rights. He was a garment cutter at Seoul’s Peace Market.

On Nov. 13, 1970, the 22-year-old garment worker poured gasoline over himself and set himself on fire in the Peace Market. Enveloped in flames, his final words were directed at the Park Chung Hee government.

“Follow the labor standards law,” he called. “We are not machines.”

But improvements in Korean factories wouldn’t come for many more years, and the government maintained a tight grip on the labor movement, which it equated to political protest movements.

“I usually worked for up to 16 hours a day. We had a day off only once a month,” Chun recalled. “When a deadline for an export order neared, a factory manager would give us a pill nicknamed ‘timing’ that would keep us awake. We would work until 4 or 6 a.m. and go to our dormitory for two hours of sleep and then return to our sewing machines. One day, a co-worker my age said, ‘Soon-ok, I think my life would be better if I just went to the roof and jumped off.’”

Now a first-term opposition lawmaker with a Ph.D in industrial relations from the University of Warwick in England, Chun faults the Park Chung Hee government for its stubborn refusal to improve harsh working conditions endured by countless young workers in the 1970s, even after the country was on track for rapid economic growth.

“President Park initiated his five-year economic development plan in 1962,” she said. “My brother set himself on fire eight years later. Many workers endured intolerable working conditions because of a belief and hope that the government would fix things as the country moved forward. But it didn’t. Not much changed in terms of working conditions [under the Park Chung Hee government].”

To be continued tomorrow.