Jeonse payments fall out of favor

Jeonse payments fall out of favor 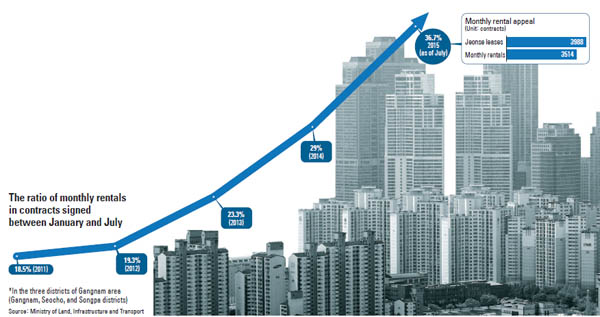 At a real estate office in Banpo-dong, an affluent area of Gangnam in southern Seoul near the upscale Raemian Firstige apartment complex, a 40-year-old housewife’s face hardened as the agent told her about the current rental market in the area.

She was looking for a jeonse (lump sum deposit) rental unit in the complex, but the agent told her there were mostly monthly rentals in the area. Among the 12 units of 84 square meters (904 square feet) available for rent, there was only one unit being rented under jeonse. The owners of the remaining 11 units were demanding monthly payments from 1 million won ($852) to 4 million won, with a small amount of additional money on top.

“I visited four real estate brokers’ offices, but I couldn’t find a jeonse rental that I wanted,” she said. “The deposits of the jeonse rentals were so expensive, so I have no choice but to choose a monthly rental.”

Kim Won-gyeong, a realtor in the area, said, “For some leases, when the jeonse expires, their owners are choosing monthly rentals for the next contracts, rather than jeonse rental.

“If you want a jeonse house, you should make a prior reservation [to
realtors].”

In the Gangnam area, the litmus of Korea’s real estate market, more houses are put on the market for monthly rentals, while jeonse leases are shrinking. One in every two houses available requires monthly rental, real estate brokers said.

A statistics report by the Ministry of Land, Infrastructure and Transport showed 34.8 percent of rental houses in Seoul, Incheon and Gyeonggi were asking for monthly payments as of Aug. 12, rising from 8.8 percent in 2013. In Seoul, the rate also increased from 23 percent to 33.2 percent during the same period.

The growth in monthly rentals was particularly evident in three districts in Gangnam - Seocho District, Gangnam District and Songpa District. As of the end of July, 36.7 percent of the total rental houses in Gangnam were monthly rentals, from 13.4 percent in 2013.

At several luxury apartment complexes in Gangnam, monthly rentals were more common than jeonse. At Banpo Xi in Banpo-dong, the number of units for monthly rental stood at 104, while those for jeonse were 92.

At the Dogok Rexle Apartment in Dogok-dong, the number of monthly rentals signed in July was 110, while jeonse leases accounted for 108.

“Most owners are looking for tenants for monthly rentals,” said Kim Yeong-cheol, a real estate agent in Cheongdam-dong, in Gangnam.

With historically low interest rate cuts this year, many owners are choosing monthly payments as they do not get much interest by depositing the jeonse lump sum money.

If an owner of a 100-million won jeonse house offers the house for monthly rental, he or she could receive about 400,000 won or 500,000 won of monthly payment, which is higher than depositing the lump sum money at the bank offering only about 1 percent in annual interest at the moment.

Many parents who live in Gangnam, an education hub in Korea, also prefer monthly payments.

“Parents who want to stay in Gangnam for the education of their children are also looking for monthly rentals, as they can’t pay the high jeonse deposit anymore,” said Shin Ae-ja, a local real estate agent in Bangbae-dong, said.

Redevelopment projects at some old apartments in the Gangnam area are also pushing the trend towards monthly rental. Many homeowners who previously lived in old apartments were seeking jeonse apartments in Gangnam for temporary accommodation.

Data from the Seoul city government showed at least 4,000 households are expected to move out from their old apartments by the end of this year due to redevelopment constructions.

“The jeonse leases are becoming more of a worry, so deposits could be surging more,” said Park Won-gap, a real estate analyst at the KB Kookmin Bank. “Escaping from the monthly rentals, the demand for housing sales will increase.”

Gweon Dae-jung, a real estate studies professor at Myongji University, said, “Many tenants are feeling overwhelmed by the increase in monthly rentals in the market. The government needs to release some policies to reduce their burden, such as tax exemptions on monthly payments.”