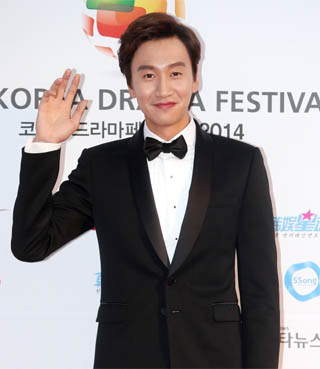 Model-turned-actor Lee Kwang-soo will walk the red carpet at an overseas film festival for the first time since his acting career began in 2008.

According to the movie industry on Friday, the 30-year-old will attend the 40th Toronto International Film Festival that kicks off Sept. 10. Lee has been invited to the event for his “Collective Invention,” which is slated to open in theaters in the latter part of this year.

The film revolves around Lee’s character, who mutates into a half-man, half-fish creature, and has been categorized in the vanguard section, in which only revolutionary and creative movies are included.

The TV personality will head to Toronto on Sept. 13 and stay there until Sept. 16. Actress Park Bo-young, who plays the lead female role, and director Kwon Oh-kwang are also scheduled to attend the international event.

Often dubbed the “Asian Prince,” the celebrity enjoys a huge following in Korea and abroad, mostly thanks to his appearance on the reality program “Running Man.”

However, despite the funny side he shows on the variety program, he has shown a more serious side through various roles including the drama series “It’s Okay, That’s Love” (2014) and the movie “Confession” (2014).