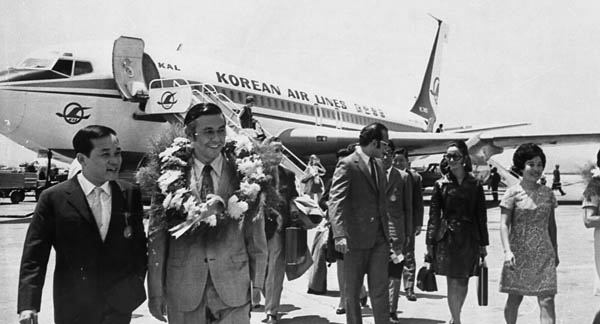 Then vice president of Samsung C&T Lee Maeng-hee, left, greeting the El Salvador Minister of Economic Affairs, second from left, along with business delegates from the South American country arriving in Seoul in 1970. [JoongAng Ilbo]

Lee Maeng-hee, the ill-fated eldest son of Samsung Group founder Lee Byung-chul and the older brother of ailing Samsung Group Chairman Lee Kun-hee, has died in China at the age of 84.

According to CJ Group, Maeng-hee died in a Beijing hospital early on Friday morning.

Maeng-hee was suffering from lung cancer. He underwent surgery in Japan in 2012 and lost about one third of his lung. The following year the cancer spread to the lymph nodes and adrenal glands. Since then he has been travelling between China and Japan for cancer treatment.

The Korean entertainment and food conglomerate said a funeral parlor will be set up at Seoul National University Hospital in Hyehwa-dong, central Seoul. The date Maeng-hee’s body will be returned to Seoul has not been confirmed as it requires the clearance of the Chinese government. 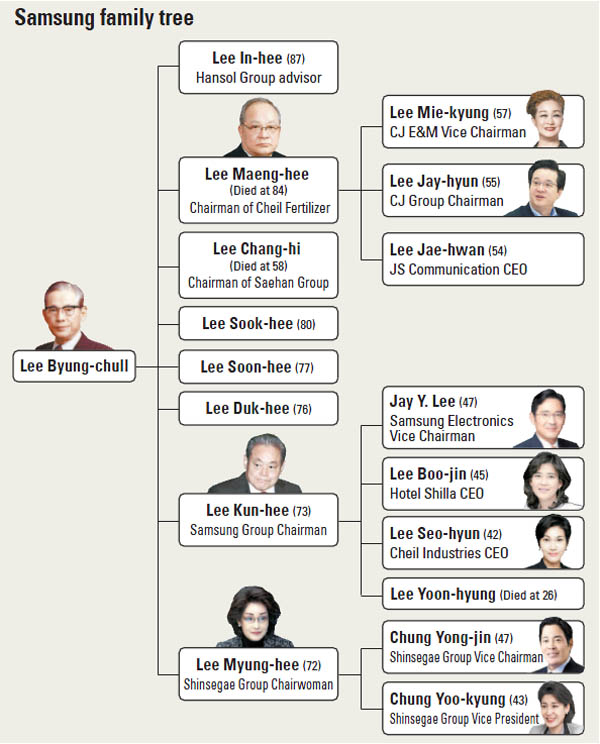 Maeng-hee is the father to CJ Group Chairman Lee Jay-hyun. Although the CJ Group chairman will likely appear at the funeral, it is questionable if he will be at the parlor to greet guests due to his health issues.

Jay-hyun, who is waiting on the final ruling by the high court on a 620 billion won ($526 million) slush fund case, which includes tax evasion and embezzlement allegations totaling 207.8 billion won, was sentenced to three years in prison in July 2013. However, last year the court accepted his request to suspend his imprisonment to allow him to treat his illness, which included a kidney transplant in 2013 during his court hearing.

He is currently staying at the Seoul National University Hospital where his father’s funeral will be held.

The younger brother Lee Jae-hwan, CEO of JS Communications, as well as CJ Group Chairman Sohn Kyung-shik are expected to travel to China in bringing back the body.

Maeng-hee has been seen as the ill-fated prince of the Samsung empire. Although he was to succeed his father, the top spot went to the founder’s third son Kun-hee, who himself has been hospitalized since May 2014. He was treated as a mental patient by his
family under the alleged order of his father.

It seemed that his succession in inheriting the biggest Korean conglomerate was certain.

He acted as a proxy to his father in running Samsung Group after founder Byung-chul abruptly announced his retirement after the Busan customs office found a Samsung Group affiliate fertilizer company to have smuggled 58 tons of OSTA, a key ingredient in making Sakhalin disguised as construction materials in 1966.

While founder Byung-chul claimed his son only acted as top management of the conglomerate for six months in his autobiography published in 1986, Maeng-hee claimed he was in charge for seven years.

“I entrusted part of the group’s management to my eldest son but in less than six months the businesses were in chaos,” Byung-chul claimed in his autobiography and added that Maeng-hee left of his own will.

But there was speculation the real reasons for the downfall of Maeng-hee was that he was suspected of sending an anonymous letter to the Blue House regarding the Sakhalin smuggling.

Maeng-hee claimed that it was the younger son and second son of Byung-chul, Chang-hi who sent the letter.

But seven years after the smuggling was detected, Maeng-hee was stripped of most of his posts within Samsung Group and was left with only three.

The older brother in his own autobiography, published in 1993, said his father came out of retirement in 1972 after the relationship between Samsung and the government improved. But the fact he was in his father’s position during the past years did not sit well with his father, souring their relations. He claimed the anonymous letter was from Chang-hi, who spent six months in jail for it in place of his father, ending his advancement.

Maeng-hee then lost the remaining three positions he had in his father’s business when the youngest son, seventh among the founder’s eight children, Kun-hee was named the sole heir to his father’s empire in 1976.

In 1987 after the founder passed away due to cancer, his younger brother Kun-hee took over the family business. Since then, for almost 40 years, the dethroned older brother has been spending his time abroad. He was no longer in the limelight other than in December 1990 when he tried to enter the country via Korean Air with 185 bullets and a pistol.

Maeng-hee in his own autobiography also claimed the father made him mad and the family paid off a doctor in Busan to take him in. He resisted by firing a shotgun at Samsung security who tried to restrain him.

In 1993, he created a small and midsize company Cheil Fertilizer, but it went bust a decade later.

Before his death Maeng-hee was in conflict with his sister Sook-hee, demanding that Kun-hee return the inheritance he claimed he secretly pocketed without the knowledge of the other siblings. However, the case was dismissed in court.

During the court dispute in 2012 Kun-hee showed animosity to his brother saying, “He is a person who has been ousted by our family 30 years ago.”

The two never reconciled, but in early 2014 after losing the first two trials, Maeng-hee, in announcing he no longer will take the feud to a higher court said, “there is nothing more important than family.”