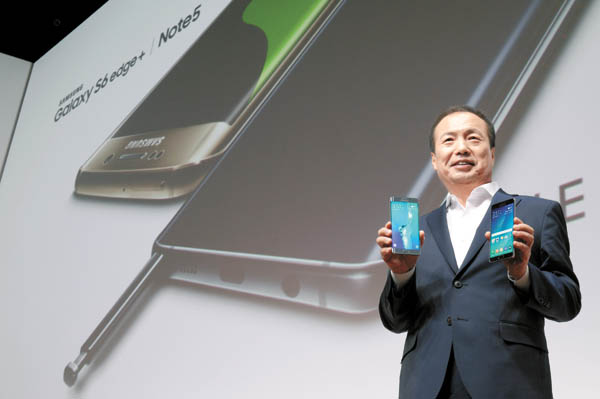 J.K. Shin, CEO and president of Samsung’s IT and mobile communications division holds up the company’s Galaxy Note 5 in his left hand and Galaxy Edge Plus in his right during an event held at Lincoln Center in New York on Thursday. Provided by the company

“We’re all using our smartphones in two major ways,” said J.K. Shin, CEO and president of Samsung’s IT and mobile communications division and frequent presenter of Samsung smartphones, at a showcase event in New York. “So we developed two devices: one ideal for the multimedia consumer, the other that’s perfect for the multitasker.”

Multitaskers are being offered the Note 5, with its signature stylus S pen and improved functionality.

Both phones feature the processor and modem used in the Galaxy S6 - Samsung’s own Exynos octa-core chip and the Shannon 333 modem. 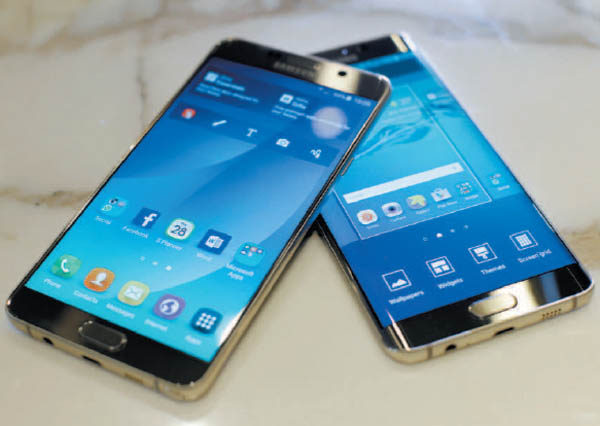 “It’s unsurprising for Samsung to release a new Note as well as a larger curved screen device,” said Daniel Gleeson, a senior analyst at market researcher IHS. “The hardware contained in both handsets was also expected, although the continued choice of Exynos is another significant flagship loss for Qualcomm’s Snapdragon range.”

Samsung’s super-sized screens are only two inches smaller than that of the iPad mini. That phablet market has been gradually expanding as faster and cheaper mobile networks have made it possible for people to watch videos anywhere.

“We believed in the promise that large screen smartphones could actively address some major consumer pain points by providing users with a better viewing experience and more productivity on-the-go,” Shin told the audience.

According to IC Insights and Strategy Analytics, two market researchers, phablet shipments around the world this year will total 252 million, up 66 percent from last year’s 152 million.

Phablets’ slice of the smartphone pie is projected to grow from 15.4 percent in 2013 to as much as 35.3 percent this year.

Apple’s iPhone 6S, slated to debut on Sept. 9, will feature a 5.5-inch screen and the Mate 8 phablet that Chinese rookie Huawei is set to unveil at the IFA consumer electronics fair in early September is rumored to have a six-inch display.

Another formidable Chinese player, Xiaomi, introduced the Redmi Note 2 phablet on Thursday, which has a 5.5-inch display and costs less than 200,000 won ($170).

The Note 5 and S6 Edge Plus will go on sale in Korea on Aug. 20 and in the United States and Canada on Aug. 21. Releases in other countries will follow.

The Note 5, with 32 GB storage, will sell in the mid-900,000 won range, whereas a S6 Edge Plus with a same-size storage will sell for over 1 million won, according to industry insiders. 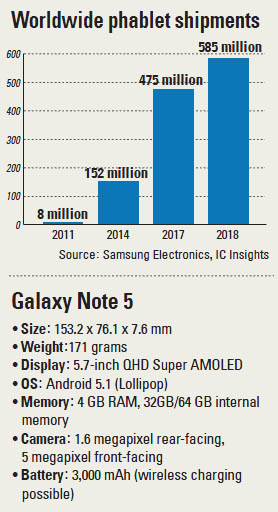 Samsung also announced at the event that it will launch Samsung Pay in Korea on Aug. 20 and in the United States on Sept. 28 after a trial period of a month. The mobile payment service can facilitate purchases nearly everywhere.

The U.K., Spain and China will get the service soon. Owners of the S6 and S6 Edge will be able to use the service by upgrading their operating system software.

The Samsung Unpacked event took place at Alice Tully Hall in Lincoln Center in the Big Apple Thursday morning local time, or midnight in Seoul. Samsung has made it a tradition since 2011 to unveil its phablet series at the IFA consumer electronics fair in Berlin every September. But the company, already nervous about worse-than-expected sales of the S6 Edge after its release in April, moved up the launch to avoid competition from archival Apple’s iPhone 6S, which comes out on Sept. 9.

At the upcoming Berlin event, Samsung will introduce its round-shaped Gear S2 smartwatch, which the Unpacked event offered a peek at with a teaser video featuring animated images of the follow-up to Gear S.