DAEGU - Lee Yong-su, 87, one of the last few surviving comfort women during World War II, approached a monument in her wheelchair at a park in Bergen County, New Jersey, on April 30.

“The witness of the history is still alive,” she shouted. “Shinzo Abe shouldn’t be lying!”

The brass plaque on a block of stone was dedicated in 2010 to the tens of thousands of women from Korea as well as many other countries around the world who were forced into sexual servitude for Japanese soldiers during the war.

Since then, Lee has gone back and forth between Boston and Washington D.C., being interviewed by various U.S. media and demanding the Japanese prime minister’s apology. 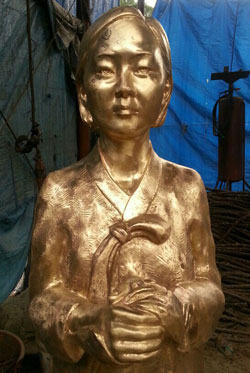 Her international recognition was made possible with the help of businessman Kim Gyo-jeong, 53, a construction company CEO in Daegu.

He learned in March from an acquaintance Kim Jong-hoon, 56, who is the chairman of the Korea-U.S. Southeast Chamber of Commerce, that Abe would be visiting the United States in April.

He visited Lee and gave her a 5 million won ($4,259) flight ticket, encouraging her to argue about Japan’s historical wrongdoings in the face of Abe. Six of his friends also chipped in for the plan.

The businessman has recently come up with a second gift for the wartime victims of sex slavery. It is a bronze statue of a girl, which is set to be installed today in a park at Daegu Girls’ Commercial High School, in commemoration of the 70th anniversary of Korea’s liberation.

The “girl of peace” statue has the look of a girl from the 1900s holding a Taegeukgi, or the Korean national flag. Kim collected 30 million won from some 10 friends and sculptor Lee Byung-ju, 53, joined the project.

Kim is preparing a third gift. He wants to emphasize the reality of the forced prostitution during Japan’s ruling period, at the site of a brothel established on a gravel field in Jung District in Daegu in 1916.

“The field was initially a swamp area but Japanese soldiers and their followers filled it with stone from the town wall - to get rid of Koreans’ spirit - and built the brothel on it,” he said.

He plans to restore the town wall by excavating the stones buried under the field and collect signatures from Daegu citizens involved in approving the plan.

“Volunteer work has many types,” he said.” “Helping out the underprivileged around you is one.”

“But resolving the sorrow of victims under the Japanese rule should also be meaningful.”