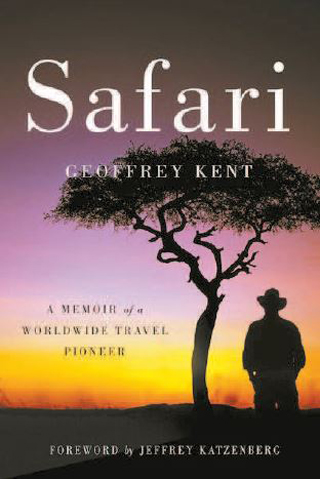 Geoffrey Kent, founder of the Abercrombie & Kent (A&K) luxury tour company, grew up in colonial Africa and hunted an elephant at age 15 in 1957. After killing “the most beauteous and magnificent beast” he’d ever seen, he vows, “If I ever shoot an elephant again, it will be with a camera.”

It’s one of many moments in Kent’s youth that planted the seeds for his adventure travel empire. Indeed, the first third of the book is the best part as young Kent, raised by British parents on a farm in Kenya, is kicked out of school and decides to become the first person to go by motorcycle from Nairobi to Cape Town, 3,000 miles. When he appears bearded and mud-stained at the Ambassador Hotel in Salisbury - now Harare, in Zimbabwe - the doorman declines to admit him until he presents a letter of introduction from a friend of his parents. He’s then escorted to a suite where he gets a bath and an excellent meal.

“This is really the life,” he thinks. “Adventure by day, fresh sheets and a spring mattress at night.”

That formula is the key to his future.

Among the book’s gems: He and his parents pick the name Abercrombie to go with Kent because it sounds “grand’’ and “will put us at the top of the yellow pages.’’

Name-dropping begins on page one as Kent goes on a safari with Richard Burton. Amid accounts of trips with everyone from Lauren Hutton to Jeffrey Katzenberg are humble asides like this: “As a boy, I never could have dreamed that one day I’d accompany the Prince of Wales to visit my old ... friend, who’s now the Sultan of Oman.”

Death-defying moments punctuate the narrative as Kent expands his company to exotic locales around the world. He describes A&K clients being led to safety during the 2008 terrorist siege of Mumbai and recalls personally delivering ransom money to free a group in Southern Sudan that included Jackie Kennedy’s sister Lee Radziwill. Kent also describes A&K’s efforts to protect gorillas in Uganda while establishing a camp there. But there’s no mention of the 1999 attack in Uganda by Rwandan rebels who murdered two A&K clients and six other tourists. A spokeswoman for the publisher said it was omitted because the book is a personal memoir about Kent’s adventures.

Kent’s achievements are truly impressive. But what starts out as a rollicking account of adventures ends up 300 pages later reading a little too much like something else that begins with “adv-” - an advertisement.