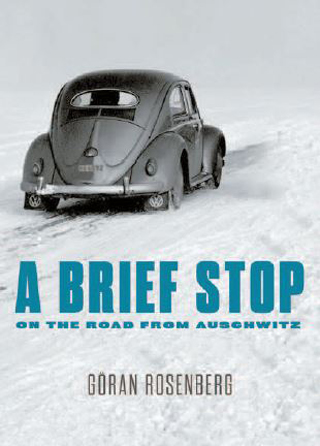 “A Brief Stop on the Road From Auschwitz” Author: Goran Rosenberg, Publisher: Other Press, Genre: Memoir

Holocaust memoirs published in the decades following the Nazi genocide of Europe’s Jews serve as gripping and historically necessary evidence to unimaginable personal suffering. However, few such memoirs are at once remarkable testimony and remarkable literature.

But a recent book by Swedish author and journalist Goran Rosenberg is both. In “A Brief Stop on the Road From Auschwitz,” Rosenberg masterfully retraces the struggle of his father to rebuild a completely shattered life after surviving Nazi slave labor and death camps, including the infamous Auschwitz.

The theme here is the seldom-told “surviving the survival,” that is, finding the will to live when everyone you loved and everything you cherished is gone.

David Rosenberg, a Polish Jew from Lodz who barely survives the war, arrives in Sweden in 1945 at age 24. He eventually settles in the bland, industrial town of Sodertalje in search of a place to replace the sights, smells, sounds and people of a world that has disappeared.

David is indefatigable in trying to build anew. He finds a job as a pipe fitter at a huge Scania-Vabis truck factory. He also reunites with Hala, from whom he was separated on the selection ramp at Auschwitz-Birkenau and they marry and soon have a child. They want to name him Gershon, after David’s father, who died in the Lodz ghetto. But friends say the name sounds too foreign. How about Goran? It’s nice, Swedish-sounding, and will help the child blend in.

While it’s a miracle that David lived to see freedom, he never truly gets free of the past. World War II is over, and - though Europe is missing two-thirds of its Jews - everyone else has moved on. David is outwardly buoyant, but his inner life becomes increasingly roiled and dark.

Sweden has its own dark side. Snowballs hit the kitchen window as children shout “Jews!’’ Goran learns on the playground that a “marble Jew” is someone who cheats at the game. And his father sustains a concussion in a violent fight at the truck factory with a co-worker who insinuates that he is a good-for-nothing Jew.

Not surprisingly, post-war Germany comes off far worse. The Germans offer reparations to the victims of National Socialism, but shamelessly make it all but impossible to qualify. A survivor must prove he is 25 percent disabled, but David’s medical examiner - appointed by Germany - looks him up and down and declares him only 20 percent diminished.

In this haunting exploration of the Auschwitz legacy - how it crushes long after the gas chambers are shut down - Goran Rosenberg has wrought, from the second-generation perspective, a book that overwhelms.

Brimming with duty-bound love but inescapably tragic at its core, “A Brief Stop on the Road From Auschwitz” is a tour de force fully on par with Primo Levi’s “If This Is a Man’’ and other literary classics of the Holocaust.