Imagine Dragons feel the love of their fans at Seoul show

Imagine Dragons feel the love of their fans at Seoul show 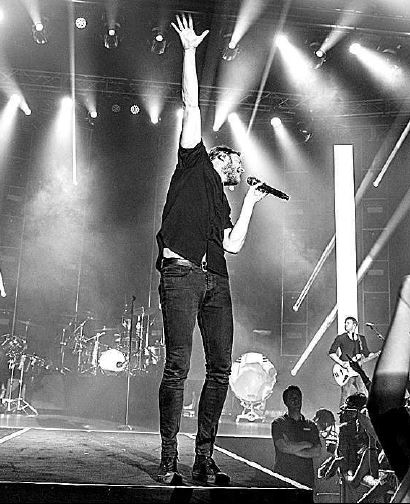 As part of the “Smoke + Mirrors World Tour” to promote their sophomore studio album, alt-rock group Imagine Dragons, led by frontman Dan Reynolds, took the stage at Olympic Hall in southern Seoul on Thursday. Provided by the organizer

REVIEW - At a sold-out concert to promote their sophomore studio album, “Smoke + Mirrors,” last Thursday at Seoul’s Olympic Hall, Imagine Dragons played with both the infectious energy of a band confident in their arena performance skill and the earnestness of a band still surprised by their meteoric rise to fame.

Since the release of their debut studio album, “Night Visions,” in 2012, the alt-rock group has received accolade after accolade, topping Billboard charts and winning praise for their blend of heavy percussive rock and synthetic electronic sound.

But in their performances, the band still displays a noticeable humbleness and gratitude, an acknowledgement that not too long ago, the group was still making their bones on the Vegas Strip.

Imagine Dragons’ popularity in Korea can in part be attributed to their last engagement in Seoul - a surprise live performance at the 2014 League of Legends World Championship finals, where they contributed the competition’s theme track, “Warriors,” expanding their international fan base to Korean gamers. Many attendees of last Thursday’s concert said “Warriors,” as well as the band’s League of Legends performance, was their introduction to Imagine Dragons.

The age range spanned generations in the audience of over 4,000, from middle school gamers to middle-aged rock fans. The show began with some of the band’s most upbeat tracks, opening with the pulsing “Shots,” the most popular track from “Smoke + Mirrors,” followed by “Trouble” and the sing-along crowd-pleaser “It’s Time,” the debut single that helped catapult the group to platinum success.

In a few cued moments initiated by the band’s fan club in Korea, the stadium was lit by a sea of glowing cell phone lights throughout the band’s performance of “Demons,” and paper airplanes from the audience engulfed frontman Dan Reynolds as he belted out the last verse of “I Bet My Life.” It was followed by a loud and powerful performance of “Radioactive,” with Reynolds draped in the Korean national flag as he chanted the lyrics from the group’s bestselling single while beating a huge bass drum.

Perhaps no moment in the 16-set concert was more memorable than when the band started playing “Polaroid.” As they were about to begin, Reynolds’ microphone momentarily gave out. While Reynolds might have recovered smoothly on his own, when he shyly announced the technical glitch to the audience, a concertgoer in the pit began cooing the song’s opening line. Soon, the entire audience followed along, cueing the lead singer into the start of the song.

It was a poignant moment that highlighted the reasons Seoul is one of the band’s favorite cities to play. The audience was consistently enthusiastic, cheering “Sang Sang Yong” - the group’s name in Korean - and singing along to nearly every track, for which the band was notably grateful.

“This is my favorite night on the ‘Smoke + Mirrors Tour,’” Reynolds told the audience. “You’ve made us feel welcome here - I feel your energy. This is a home away from home.”