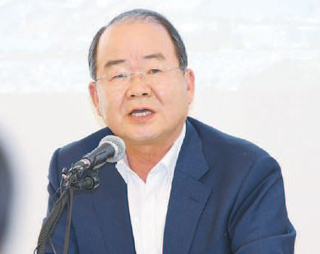 Daewoo Shipbuilding & Marine Engineering CEO Jung Sung-leep talks about the company’s restructuring plans in May at the company’s headquarters in central Seoul. The company reported over 3 trillion won (2.5 billion dollars) in losses for the second quarter due to struggles in the offshore plant business. Provided by the company

Over the past decade, the nation’s leading shipbuilders - Hyundai Heavy Industries (HHI), Samsung Heavy Industries and Daewoo Shipbuilding & Marine Engineering (DSME) - aggressively jumped into the offshore plant business to escape tough market conditions for their other products. Global demand for merchant vessels was on a steady decline and competition with rivals China and Japan neck and neck. The companies shifted focus to a new opportunity that had real scope and was much more profitable than ships.

Offshore plants are facilities and related equipment used to extract resources from under the sea, including gas and petroleum. There are many different types of offshore plants and they generally take two to four years to complete. They are bigger and more complicated projects than ships that demand high-end technologies. That’s why they are more profitable. The flip side is that clients frequently request design changes that can be expensive for the shipbuilders, who have already committed to a price for the project. It is a high-risk and high-reward business akin to miners digging for gold with explosives.

Looking at the three big shipbuilders’ recent results, the business has proven to be a disaster for them. The three reported 4.7 trillion won ($3.9 billion) in losses in the first half of this year alone, mainly due to weakness in the offshore plant business, and financial institutions and investment houses said last week the total estimated losses for the three companies this year could be 5.6 trillion won. If you add the 3.2 trillion-won loss by HHI last year, the figure skyrockets to 9 trillion won.

There was good reason for the shipbuilders to pile into the offshore plant business: the sorry state of the global shipbuilding market. According to U.K. research firm Clarkson, Korean shipbuilders won contracts for 32.55 million compensated gross tonnage (CGT) of ships in 2007, which shrank to 4.37 CGT in 2009 after the global financial crisis in 2008. Under those miserable circumstances, the offshore plant business was considered a golden opportunity to overcome declining sales in the shipbuilding business.

The three companies did very well from the start. From the late 1990s to 2000s, Samsung did well in the tension leg platform business and DSME earned hundreds of billions of won in profit in the Pazflor FPSO (floating, production, storage and offloading) sector in 2011. In 2012, Samsung won $2.7 billion worth of orders for Ichthys CPF (central processing facility) and later won three additional orders worth about $8.7 billion. DSME also won a $2.06 billion order for a Songa rig project in 2011 and HHI won the Seadrill semi-submersible drilling platform project worth $550 million in 2012.

“The booming offshore plant industry eased shipbuilders’ worries that they might not have enough work to make money,” said Hong Sung-in, a researcher at the Korea Institute for Industrial Economics and Trade (KIET). “That later led to fierce competition among local companies, which made them bid for projects at prices that were lower than their costs.” 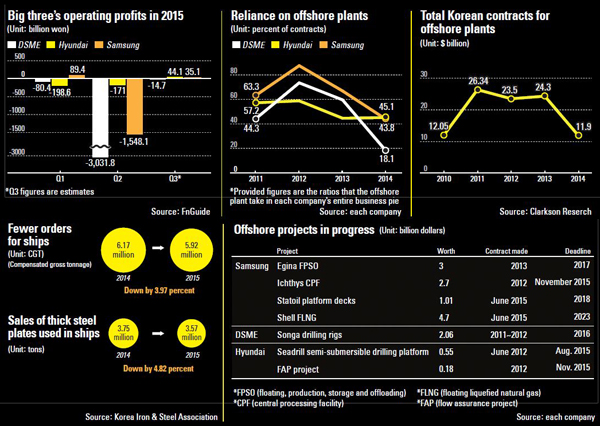 “The price should at least be above $90 per barrel to make major oil companies keep working on developing submarine oil fields,” said Yang Jong-seo, economic researcher at the Export-Import Bank of Korea. “But it doesn’t look like the price will reach that level soon. There are opinions that the price will rebound around 2017, but no one is sure about that.”

The average price of Dubai crude was $60.84 per barrel in June, and the figure dropped by 8.6 percent in July to $55.61 per barrel, according to the Korea National Oil Corporation (KNOC). OPEC recently said in a report that the international oil price will not rise to $100 per barrel level in the next 10 years.

Shipbuilders started trying to win more contracts to build liquefied natural gas carriers, oil tankers and container ships, but those markets are smaller than for offshore plants, and demand for fuel-efficient, environmentally friendly vessels are decreasing.

Even as the market was shrinking, the three big shipbuilders couldn’t overcome the temptation to bid on high-return offshore plant projects worth a trillion won each. Since the Korean big three are practically the only companies in the world with docks large enough to manage the building and installation of an offshore plant, they consider themselves kings of the industry. Building a merchant vessel is worth about $300 million at most, but a FPSO project costs about $2 billion.

The companies soon found themselves overreaching. DSME won a contract to build four drilling rigs worth 2.4 trillion won in 2011 for Songa Offshore of Norway, but ended up losing about 1 trillion won on the contract when it couldn’t meet the deadline. The company was supposed to deliver the first drilling rig by the end of last year, but it was delayed for six months. DSME said the cause was errors Songa made in the basic design, but the bigger problem was that it didn’t have experience with such work in the past. The company filed for arbitration with Songa Offshore in July with the London Maritime Arbitrators Association.

Samsung had 1.7 trillion won in losses from two projects: a Nigeria Egina FPSO project and an Australia Ichthys CPF, while HHI had about 600 billion won in losses for delays last year in the Saudi Arabia Jeddah and Shuqaiq projects, both of which are oil-fired thermal power plant projects.

“Offshore plant work might be the toughest among any industries,” said an executive of a shipbuilder on the condition of anonymity. “The process is very tough. We have to work on the surface of the ocean where strong waves and wind are all over, meaning that it could cause a terrible explosion if we make a 1-centimeter error from blueprints.”

“Since the big three don’t have front-end engineering design ability, they have to pay additional costs every time construction is delayed or basic designs are changed,” KIET researcher Park Gwang-soon said. “Unlike shipbuilding, the entire process of offshore plant work - drilling, production and storage - is done in one place, and because each place has a different ocean environment, it is impossible to standardize the work process, meaning it is hard to utilize the know-how learned in previous projects.”

Korean shipbuilders sign lump sum, turn-key contracts with clients, meaning the builders take responsibility for everything, including design, equipment purchasing and construction, and any additional cost incurred during a project period. But the companies heavily rely on foreign companies for core equipment and facility designs, meaning the Koreans just assemble what foreign subcontractors produce. In 2011, when the local shipbuilders were aggressively expanding into offshore plants, only 20 percent of the equipment used was in-house technology, according to the Korea Research Institute of Ships and Ocean Engineering. The figure only increased to 30 percent last year.

“This means that local companies only take get portions of the profits they earn from the offshore plant business while taking all the responsibilities and additional expenses,” said an executive of a local shipbuilder on the condition of anonymity. “It takes months to adjust designs during the building process. The Korean companies’ technological ability in the business is only at the 20 to 30 percent level of other foreign businesses in Europe and the United States.”

But industry insiders say the big three shouldn’t give up on offshore plants since it is obviously a growth engine for the shipbuilding industry. The companies will first focus on damage control. Samsung said Thursday that President and CEO Park Dae-young called an emergency meeting with 110 executives to discuss how to go forward at its Geoje dockyard in South Gyeongsang. Since the company had about 2 trillion won in losses for the offshore plant business, industry insiders say the possibility is high that the company may lay off some of its workforce.

The situation at DSME is more serious. It said on Wednesday that about 1,300 workers in department head positions or above are subject to a restructuring, adding that it started reviewing employees’ evaluation records and will ask poor performers to leave. It also decided to reduce the number of executives from 55 to 40. HHI made 25 executives leave the company last month and replaced them with people in their 40s. About 1,500 administrative workers also left the company last year.

“The restructuring of the workforce was necessary to improve the company’s productivity and reduce expenses,” said DSME CEO Jung Sung-leep. “Some employees will be affected by the plan, but they should have a mindset of sacrifice for younger generations.”

As part of its effort to improve efficiency, HHI will try to develop more core parts and equipment at home. The company imported about $1.8 billion worth of parts and equipment every year in the past, but has set a goal to produce 54 percent of 165 core pieces of equipment being used in offshore plants on their own by 2018.

The companies are also trying to switch to a cost-plus contract system, which would force clients to pay additional expenses incurred during a project for design and other changes. Samsung inked a deal to build a crude production facility under such a contract earlier this month.