NPAD calls for removal of sanctions

NPAD calls for removal of sanctions 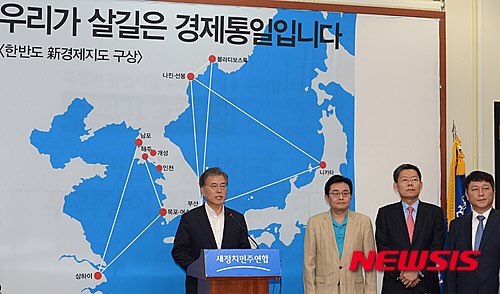 In a Sunday press conference commemorating the 70th anniversary of Liberation Day, Moon Jae-in, chairman of the main opposition New Politics Alliance for Democracy (NPAD), urged the government to lift the May 24 sanctions Seoul imposed on Pyongyang in 2010, stressing that deterring North Korea has only paved the way for the communist state to strengthen ties with China and move farther away from inter-Korean unification.

“It wasn’t North Korea who suffered an economic blow as a result of the May 24 sanctions,” Moon said, “but rather South Korean companies.”

The politician, who formerly served as chief of staff in the liberal Roh Moo-hyun administration, continued that consolidated relations between Beijing and Pyongyang have undermined South Korea’s role in Northeast Asian politics.

Moon criticized President Park Geun-hye’s administration for failing to lift sanctions that resulted in Pyongyang depending more on China, and Tokyo raising its voice for collective self-defense, or the right to wage war outside its borders.

“No issue will be solved by idly depending on China or signaling the United States [to take action],” he said. “We cannot and must not rely on others.”

Liberation Day, which marks the end of Japanese occupation and independence of Korea, fell on Saturday.

The May 24 sanctions are a package of economic sanctions against Pyongyang, which were declared by former President Lee Myung-bak in retaliation for the sinking of the South Korean warship Cheonan. A total of 46 South Korean sailors were killed. Under those restrictions, all inter-Korean business cooperation was halted with the exception of the Kaesong Industrial Complex.

The package of sanctions was put in place to make clear the government’s resolve to receive an apology and assurance from Pyongyang that it would never carry out such a deadly provocation again. Pyongyang has yet to apologize or admit its role in the sinking.

In suggesting how Seoul could get Pyongyang back into denuclearization talks, Moon suggested a simultaneous two-track approach that includes discussions between Seoul and Pyongyang, and Pyongyang and Washington. A similar negotiation framework to the now-stalled six-party talks is necessary because the former series of meetings proved to be the “only way” through which North Korea will give up its nuclear bombs.

The six-party talks with the two Koreas, Japan, Russia, China and the Untied States began in 2003 with the aim of convincing Pyongyang to abandon its nuclear ambitions, though discussions have stalled since late 2008, when the North walked out.

Pyongyang has reached out to Washington several times since, demanding the withdrawal of U.S. troops from South Korea before talks resume. Washington has said it has no intention to return to negotiations unless Pyongyang demonstrates concrete steps toward denuclearization.

Explaining how Seoul could redesign a rapprochement-based foreign policy toward the North, Moon relayed the so-called Korean Peninsula New Economic Map, noting that business opportunities in Pyongyang would be a gateway to penetrating industrial markets in Japan, China and Russia.

Developing an “economic community” with the North would enable South Korea to reach 80 million consumers and boost the per capita income to $30,000, said Moon, adding that the opportunity would add 0.8 percentage points to the annual growth rate and create 50,000 jobs every year.

The ruling Saenuri Party brushed off Moon’s optimism in a press briefing the same day, doubting that the general public would empathize with such a cooperative mood.

“The government has relentlessly offered humanitarian assistance to North Korea,” said Saenuri spokeswoman Shin Yee-jin. “Nevertheless, its response was the Cheonan sinking, the shelling of Yeonpyeong Island and planted land mines near the demilitarized zone.”