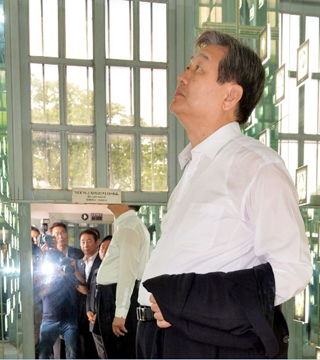 On the 70th anniversary of Liberation Day, ruling Saenuri Party Chairman Kim Moo-sung attempted to smooth over the controversy over his late father while advancing his political career.

On Friday, a day before the holiday, Kim demonstrated his patriotism by visiting various historical sites in Seoul. The move came a day before a new biography of his late father, Kim Yong-joo, was released on Saturday.

The book, and the hype leading up to its publication, including newspaper ads, has triggered renewed criticism of the chairman’s father as having been pro-Japanese. Opposition politicians allege that the book, titled “The Mountain That Crosses a River,” paints a picture of the elder Kim as an anti-colonial activist, based on the advertising.

Kim’s began on Friday by visiting the grave of Kim Koo, a national hero who fought for independence from Japan, at Hyochang Park in central Seoul along with party leadership. He laid a flower and then looked around the memorial hall.

Then he moved to Seodaemun Prison History Hall, which formerly housed independence activists during Japanese rule. The prison is now operated as a museum of colonial history.

“On the 70th anniversary of the country’s liberation, I pay respect to the patriotic martyrs who put more value in the faith of the country than their own lives,” he wrote in the visitors’ log.

He also bowed to the memorial tablets commemorating the independence fighters inside the museum.

Kim’s last stop was Yihwajang, a house in central Seoul where the country’s first president, Syngman Rhee, stayed during the early days of presidency and where he was initially buried before being moved to the National Cemetery.

Kim’s father worked as civil servant and lawmaker, and has been long surrounded by controversy over his pro-Japanese activities. The main opposition New Politics Alliance for Democracy (NPAD) has criticized the new biography as an attempt by Chairman Kim to paint a rosier picture of his father’s past.

“The path of Chairman Kim’s father described in the advertisement appears to be that of a patriotic activist who dedicated himself for the country during that turbulent time in modern history,” said NPAD spokeswoman Yoo Eun-hye on Thursday. “We are not laying responsibility on Chairman Kim for his father’s activities,” Yoon continued, “but the publication of the book and the advertisement somewhat appear to have something to do with Kim’s political moves.”

Kim, however, had no response for the claims.

“Assessment [of my father] is yours to make on your own,” Kim said when he met with reporters at Yihwajang. “I don’t intend to deal with [the NPAD’s accusations].”

Meanwhile, Kim is increasingly gaining on his political rival, Seoul Mayor Park Won-soon, in the race to be the next president. In the latest poll conducted by the Gallup Korea on 1,005 respondents from Tuesday to Thursday, Kim was selected by 15 percent of them, up from 13 percent in July and the highest since August of last year. Park’s approval rating came down from 17 percent to 16 percent.