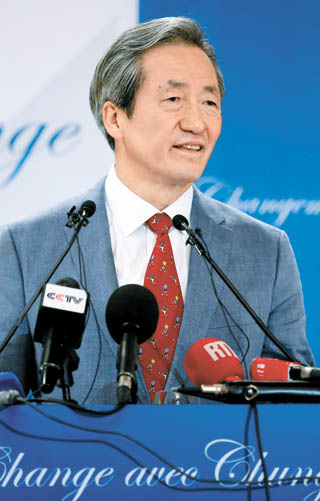 Chung Mong-joon announces his candidacy for the upcoming FIFA presidential election, in Paris on Monday. [AP/NEWSIS]

Former FIFA vice president Chung Mong-joon urged transparency and accountability on Monday as he officially declared his bid for the presidency of the world football governing body.

At a press conference held at the Shangri-La Hotel in Paris, Chung, who served as FIFA vice president from 1994 to 2011, said it is time for change and to revive common sense in FIFA.

“The FIFA president must be a crisis manager and a reformer,” Chung said. “He must be more than just a head of the technical department.”

Chung, 63, has been an active critic of current FIFA President Sepp Blatter, who is in under pressure following the United States and Swiss authorities’ investigation into an alleged
corruption scandal involving FIFA
officials.

The 79-year-old Blatter, who first joined FIFA 40 years ago, announced his resignation just four days after he was re-elected for his fifth term on May 29. He will keep his job until the FIFA presidential election on Feb. 26.

Chung said FIFA became corrupt because Blatter had held on to power for too long. The former Korea Football Association president said that to prevent corruption within the federation, the leader has to be changed periodically.

“If I get elected as FIFA president, I will serve a four-year term only once,” he said. “I can change FIFA in four years.”

Chung also said marketing and television deals were handled by a small number of Blatter’s people in FIFA behind closed doors. He said he will build transparency and accountability in FIFA’s decision-making process and let each committee have more precise and active roles.

Chung’s other proposals include reinforcing “checks and balances” between FIFA’s executive committee and judicial bodies, boosting its financial assistance program for each football federation across the world, encouraging female representation within FIFA and upgrading the status of the FIFA Women’s World Cup by increasing prize money.

Chung, the scion of the Hyundai Group and currently largest shareholder of shipbuilder Hyundai Heavy Industries, added that he will also open for scrutiny the salary, bonuses
and other expenses used by the FIFA president.

Chung, the former lawmaker for the ruling Saenuri Party who once tried to become the president of Korea, will go up against UEFA President Michel Platini, who declared his bid last month.

Chung pointed out that Europeans have ruled FIFA for over 111 years - with the exception of Joao Havelange of Brazil from 1974 to 1998 - but it is time for FIFA to adapt to a new reality, pointing directly at the 60-year-old Frenchman Platini. Chung has been saying Platini is a “protege” of Blatter.

“Continuity is important, but so is change,” he said.

Meanwhile, before Chung’s announcement, the Korea Football Association (KFA) announced that it supports his bid for the FIFA presidency.

KFA President Chung Mong-gyu said in a statement that he believes Chung Mong-joon can solve various problems that FIFA is suffering today and push reforms. Chung Mong-joon is an older cousin of Mong-gyu,

“He will usher in a new era for FIFA,” Chung Mong-gyu said. “His bid should allow Korean football to make a major contribution to the development of world football.”