Closed-door talks for Choi and Lee

Closed-door talks for Choi and Lee 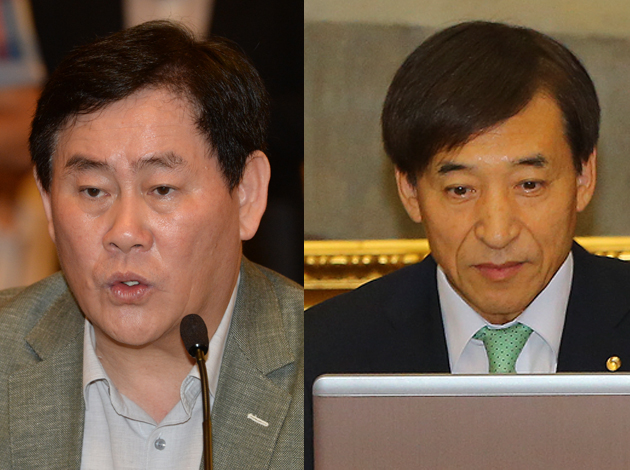 Finance Minister Choi Kyung-hwan will have closed-door bilateral talks with Bank of Korea (BOK) Chief Lee Ju-yeol at the end of August, almost in a year since their last official meeting.

“Requested [by] the Ministry of Strategy and Finance, Lee will have a meeting with Choi,” said a BOK official. “The meeting itself has no special agenda.”

“Since September 2014, there has been no official meeting between Choi and Lee,” another Finance Ministry official told the Korea JoongAng Daily. “Still, Choi and Lee informally met abroad on the sidelines of their business trips.”

Although officials said the upcoming meeting would be just for improved relations between the two bodies, market insiders are closely watching its impact on further currency policies, given their two previous talks.

On July 21, at the Press Center, central Seoul, Choi had a meeting with Lee, just days after he took office as the finance minister.

Two months later, at the Meeting of G20 Finance Ministers and Central Bank Governors in Cairns, Australia, Choi and Lee stayed at the same hotel and had a so-called “wine meeting.”

After the meeting, Choi denied allegations of pressuring the central bank governor to cut key policy rates to stimulate the sagging Korean economy.

“I never mentioned the word of ‘rate’ to him,” Choi said at the time. “However, [even if I didn’t say it] he would know what I mean.”

Since he took office, Choi has frequently stressed the importance of a rate cut and pledged to not boost the economy through a supplementary budget.

Although Choi denied his alleged push on the BOK, the central bank lowered the key policy rate twice after his meeting with Lee - from 2.5 percent to 2.25 percent in August, and to 2 percent in October.

Choi’s remarks on the wine meeting - “he would know what I mean” - triggered controversy that the government damaged the autonomy of the central bank.

Some BOK officials allegedly got angered by the comment and Rep. Hong Jong-haak, from the opposition New Politics Alliance for Democracy, said at a hearing with BOK officials that Lee “drank up the autonomy of the central bank with the wine.”

However, recently, industry observers have pointed out the necessity of keen cooperation between the government and the central bank over currency and foreign exchange policies, in the midst of increasing uncertainty in the financial market hit by the weak yuan and looming speculation on a U.S. rates hike.

Some sources said the BOK accepted the proposal for the meeting because unlike previous talks last year, expectations are high that the central bank would not cut rates further for a while from the historic-low 1.5 percent.

Even if the two heads meet this time, it would not prompt allegation that the finance ministry is again trying to push the bank for another rate cut, sources said.