SK Group to invest big in its affiliates

SK Group to invest big in its affiliates 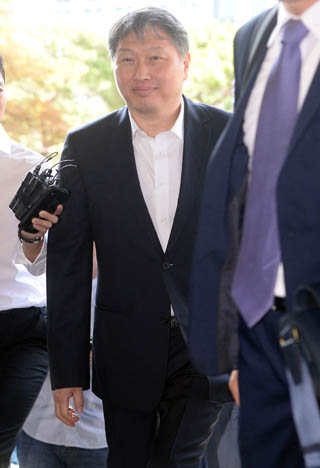 SK Group Chairman Chey Tae-won announced an investment plan worth at least 46 trillion won ($38.8 billion) on Monday at a meeting with CEOs of the group’s key affiliates, just four days after being released from prison on Friday.

The investment will go solely to the group’s flagship SK Hynix over the coming years, and additional multi-trillion-won investment projects will be announced for the group’s energy, chemical and IT affiliates, in an effort to jump-start the investment decisions that had been frozen during Chey’s time behind bars.

The investment plan was announced at a luncheon hosted by Chey on Monday, his first meeting with the CEOs of the group’s 17 major affiliates since being released. He urged the heads to expedite investment and submit lists of business sectors needing funds. Members of the SK SUPEX Council, the highest decision-making body that oversaw the group during the chairman’s absence, also attended.

The council initially told Chey at the meeting that the group was reviewing a 46 trillion-won investment to strengthen SK Hynix’s semiconductor businesses by building two extra production lines and upgrading machinery at existing sites.

Chey then pushed the executives to come up with measures to make extra investments towards other IT, energy and chemical affiliates, saying, “Expediting and expanding investment are two practical ways to help revitalize the national economy.”

Chey also pushed the executives to ensure the job creation plans announced earlier this month, which promised to hire 4,000 entry-level employees over the next two years.

The specifics of the investments will be announced within the month, according to industry insiders.

They say that Chey’s aggressive moves of taking care of the group’s key businesses are caused by being the only conglomerate CEO who was included in the Blue House’s special pardons commemorating the 70th anniversary of Liberation Day.

“I will try to visit as many production sites as possible soon, so that I can have a better idea of our businesses,” Chey told reporters Monday morning while entering the SK Group’s headquarters in Seorin-dong, central Seoul.

However, the market maintained a conservative attitude regarding SK’s aggressive investment plan.

SK Hynix initially jumped in the morning in the wake of reports that Chey was going to announce an investment plan but later dropped to close at 35,650 won, down 3.39 percent compared to last Friday. Most other SK affiliates’ stocks declined.

Analysts said the investors believed that expansions to SK’s production line could result in a surplus in the memory chip market and a drop in prices, especially as other chipmakers like Samsung Electronics are scheduled to open additional factories.

“As such a large chunk of investment was announced to go towards SK Hynix, the investors have thought the investment may turn out to be a long-term risk, [which may reduce the company’s profitability],” said Hong Seung-pyo, an analyst at Samsung Securities.

“The market wants the group to invest in the right way that actually enhances the companies’ corporate values.”