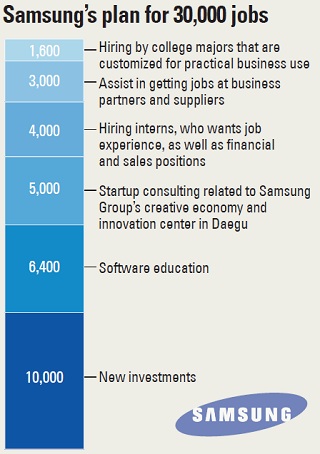 Samsung Group is launching a 100 billion won ($84 million) scheme to get more young people into the workforce who are struggling to find jobs.

The nation’s largest conglomerate will invest the money over the next two years to provide training and job opportunities for about 30,000 youths.

The company will also adopt the peak wage system at all its affiliates to expand the opportunity for young people to get into the workforce. The latest project is in addition to the company hiring about 9,000 each year.

The conglomerate said on Monday it will provide training as well as financial support during the training period for 3,000 young people who hope to land a job at Samsung’s business partners and suppliers. 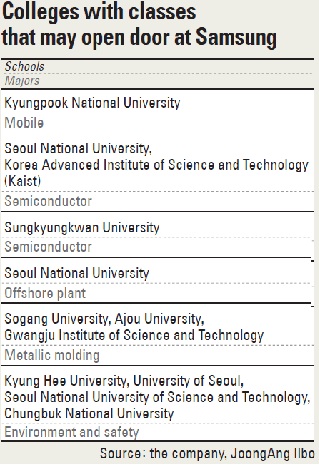 The program is dubbed “didimdol” or translated as “stepping stone.”

Under the program the young people who apply for the position will receive three months of training at Samsung and will be working as interns for another three months at the business partners or suppliers. Samsung will cover all of the 1.5 million won monthly paychecks for each applicant during their six months under the program.

Workers who have undergone the program and worked for more than four years at a business partner or supplier get the chance to be hired as experienced workers at Samsung affiliates.

Samsung also plans to expand the affiliates that will participate in the job fair to small and midsize business partners and suppliers. Previously companies that took part in the job fairs, held every year since 2012, were mostly concentrated on those related to the flagship Samsung Electronics. The business partners were also related to Samsung Electro-Mechanics and Samsung SDI. Last year some 200 small- and medium-sized enterprises including Daeduck Electronics and EO Technics participated.

Starting this year, however, business partners and suppliers of other Samsung affiliates will participate, including Samsung C&T, Samsung Heavy Industries and Hotel Shilla. The job fair will be held in November.

The Korean conglomerate also plans to expand its cooperation with major colleges to contribute to the hiring of more college graduates with specific skills.

Samsung will be working with 29 four-year colleges and nine two-year colleges in fostering talents under specifically customized majors.

The students under the programs - including software, offshore plans and environment and safety - will have a better chance of landing a job at one of Samsung’s companies after
graduation.

The conglomerate also plans to finance 2,000 interns to give them first-hand job experience. Under the program, interns will receive training on sales of electronics products for a month and then get firsthand field experience for two months.

The company will pay 1.5 million won a month to the interns and eventually hire those with exceptional performance. Additionally it plans to create 2,000 jobs in financial sales, including life insurance experts.

Samsung Group said it also plans to create 10,000 additional jobs by 2017 through aggressive investments in many of its businesses, including the expansion of production lines and the construction of hotels and duty-free stores.

In a further bid to create job opportunities, the company plans to open an education program through its creative economy and innovation center, aimed at educating 5,000 young people in start-ups in the next two years.

Meanwhile, starting next year the Samsung Group will adopt a wage system where employees who reach age 56 will see their annual paycheck cut 10 percent every year until the age of retirement. This will allow the conglomerate to secure funds that will help finance hiring younger applicants. The peak wage system will not change the older employees’ welfare and other benefits, however.

“Through the creation of jobs for young people we plan to do our social responsibility and contribute to the establishment of [an economic] circulation structure where hiring will lead to growth,” said Kwon Oh-hyun, Samsung Electronics’ vice chairman.

Recently the Park Geun-hye administration has been ramping up its campaign of labor market reform, which includes encouraging the private sector to hire more people. The heightened campaign comes at a time when the private businesses, government and the labor unions are attempting to renegotiate labor reforms.

The government labor reform, which is part of the grander economic revitalization campaign, is considered a crucial factor that will contribute to solidifying the leading party’s position in next year’s general election.

At her speech delivered to the public on Aug. 6, President Park Geun-hye stressed the need for reform in the labor market.