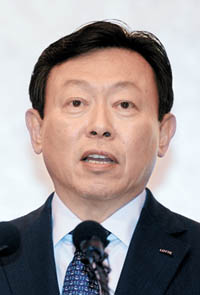 It only took 20 minutes for shareholders of Lotte Holdings in Tokyo to reaffirm Shin Dong-bin’s control of Korea’s leading retail giant on Monday, presumably ending the feud between him and his older brother.

At the undisclosed meeting, shareholders of Lotte’s Japanese unit backed motions proposed by the Lotte Group chairman and co-CEO of Japan’s Lotte Holdings, which is the de facto holding company of the conglomerate’s operations in Japan.

With the decision by the shareholders, Shin Dong-bin has completed his succession as head of the family business; one Lotte under one leader.

The elder brother was present at the meeting on Monday, while their father, the 92-year-old founder, was not.

There were two motions on the table: appointment of an outside director and assurance of management based on rules and principles.

The latter proposal was intended to prevent non-business issues, such as family affairs, from affecting the management of Lotte Holdings, Korea’s Lotte Group explained.

The shareholders endorsed the motions to pursue “a stable management structure led by Shin Dong-bin” during the meeting, according to a statement released by Lotte Group.

The backing represents a major triumph for Dong-bin, the second son of founder Shin Kyuk-ho, who has fought an intense succession battle over control of the retail group that erupted last month.

In addition to the endorsement, the stakeholders also agreed to the appointment of an external board director.

Lotte Holdings named former Japanese lawmaker Tomoko Sasaki as an external director in a bid to manage the company based on the rule of law.

Both Lotte Holdings and Lotte Group, however, refrained from providing a specific breakdown of how many shareholders supported the motions.

The chairman reaffirmed his will to lead the entire business of Lotte Group while apologizing over the family feud during the meeting.

“This [shareholder meeting] was designed to address the recent incident and prevent the recurrence of such events. The shareholder meeting allows Lotte to enhance transparency and management according to the law,” he said.

“I think one should not let family affairs meddle in management issues.”

The chairman announced a set of reform measures to enhance corporate governance of Lotte Group, as the family squabble exposed Lotte’s murky shareholdings.

Under the plan, Lotte will reduce shares held by Japan-based holding companies in Hotel Lotte, a de facto holding company of Lotte’s operations in Korea, and take the hotel unit public.

Lotte will also adopt a holding company to manage the sprawling businesses of Korea’s Lotte Group, with 80 subsidiaries, a sweeping change that will cost around 7 trillion won ($5.9 billion), according to the group.

While the shareholder meeting bolstered control of Shin Dong-bin, it dealt a huge blow to his brother.

The older son of the founder said earlier that he would seek to change the existing board and return the patriarch to a board seat at the meeting.

He claimed that he could win the support of two-thirds of shareholders when combining the voting rights held by himself and Kojyunsya, a major shareholder of Lotte Holdings headed by the founder, along with employees who own stock.

Despite the results, Shin Dong-joo appeared unfazed. “I’d like to go along with my colleagues and business partners by conveying my thoughts and beliefs to them,” he told reporters after the meeting.

He was stripped of the vice chairmanship of Lotte Holdings in January.