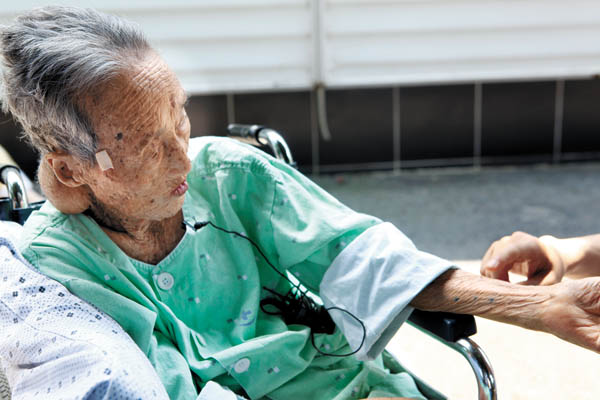 Gong Jeom-yeop, 95, a survivor of World War II sexual slavery, shows a tattoo on her left wrist which reminds her of her three friends who suffered with her during her time at the Japanese army’s brothel in Haicheng, China. By Jeong Hyuk-jun

In what may be the last record of their personal experiences as sex slaves during World War II, some of Korea’s surviving “comfort women” have revealed their heart-wrenching stories in exclusive interviews.

Korea was abruptly liberated from 35 years of Japanese colonial rule (1910-45) on Aug. 15, 1945. But for women who had to endure the agony of serving as sex slaves in Japanese military brothels during colonization, further challenges awaited them.

Scholars estimate that between 80,000 to 200,000 girls and young women were forced into sexual slavery by the Imperial Japanese Army during World War II and were made to serve in military brothels throughout Asia. They are euphemistically referred to as comfort women. More than half were Koreans.

The JoongAng Ilbo, an affiliate of the Korea JoongAng Daily, gathered oral testimony from 13 of the survivors over the past month to record their horrific tales in their own words to help mark the 70th anniversary of Korean liberation and the daily newspaper’s 50th anniversary.

There are only 47 surviving sex slave victims out of the original 238 who had registered with the Korean government. Their average age is 89.1 years. The oldest survivor is 99 years old and 19 are in their 90s.

“Over half of the surviving victims suffer from dementia and other illnesses related to old age,” said an official of the Ministry of Gender Equality and Family. “There is not a lot of time left.”

This series of interviews may be their last opportunity to leave a record of their traumatic stories.

Many of the women were sacrificed for their families to pay for the release of a father from prison or to save their impoverished household.

They were scattered to foreign countries such as Singapore, Taiwan and China, where it was difficult to return to their homeland.

One survivor, Kim Gun-ja said, “I didn’t even know that we were liberated. They told us to go as we please. I wasn’t given any money and left empty-handed.”

Many, like Park Ok-sun, suffered from deep shame. “Because my body was like this, I thought I would bring dishonor to my parents.”

The survivors said that even after their return home, they faced economic hardships and discrimination, and many had to move away from their hometowns. Because of a guilty conscience, some had difficulty finding love and marrying, and many kept silent about what they endured.

In 2001, the Gender Ministry conducted a survey on 192 comfort women victims, and 55.7 percent were from Gyeongsang province, 18.8 percent from Jeolla and 7.8 percent from Chungcheong, indicating these girls were recruited from across the nation. According to the survey, 51.6 percent had married.

Under the 1965 claims agreement which normalized relations between Korea and Japan, Seoul received some $600 million in grants and low-interest loans from Tokyo.

The money from Japan was mostly used to fund the Pohang Iron and Steel Company, now Posco, and the construction of the Gyeongbu Expressway.

The victims did not receive any official support from the Korean government until after 1993, when a special law was passed after the issue became more widely recognized.

The comfort women issue was raised first in Japan in 1973, when writer Kakou Senda, a reporter with the Japanese daily Mainichi Shimbun, wrote a book on the topic, “Military Comfort Women.” In the 1980s, local civic organizations were formed and Koreans showed more interest in the issue.

On Aug. 14, 1991, the late Kim Hak-sun spoke publicly for the first time about her past as a comfort woman. This prompted more women to step forward to speak about how they suffered as sex slaves for the Japanese military. Since then, the international community has joined in urging the Japanese government to give an official apology to the victims of sexual slavery.

Gong Jeom-yeop, 95, one of the older survivors who spent a decade as a sex slave under Japanese military brothels in China, was wearing hospital garbs in the sweltering summer heat when the JoongAng Ilbo visited her at a nursing home in South Jeolla for an interview on Aug. 5.

After a stroke earlier this year, she has begun to experience paralysis to her left hand and feet. Even in the middle of summer, they remained cold.

A small lump on the back of her neck, from an injury she suffered when she was dragged away to the so-called comfort station, has now grown to the size of a fist.

“Aigo (ah), I really suffered endlessly. If I think of how I was able to survive, it is very much like a dream,” Gong said.

In 1935, Gong, at the age of 15, left her hometown of Muan County in South Jeolla. She was told she would be employed at a silk factory and followed three Japanese men to China. There, she was sent to a so-called comfort station in Haicheng, a city in Liaoning province in northeastern China.

On the first day she arrived, Gong, who had never even held hands with a man before, described how she had to serve seven soldiers.

Trapped in a foreign country, the young Gong spent each night in tears.

“When Sunday came along, dozens of soldiers came in. They were lined up and didn’t even take off their shoes when they came in, slept with me and left.”

When asked how she was able to overcome the hard times, Gong rolled up her left sleeve.

On her frail wrist, there were three black dots. They were a reminder of three older girls at the same military brothel who first brought laughter to her nightmarish life there. She said that the four of them got the same tattoo.

The other girls were dragged away from Suncheon, a city also in South Jeolla, Jeonju in North Jeolla and Gwangju. They watched out for Gong like she was their own younger sister.

She pointed to each of the dots. With tears coming to her eyes she explained, “This is the Suncheon unni (older sister), this is the Gwangju unni, and finally this is the Jeonju unni.”

By 1938, life at the military brothel became more and more hellish. There was an endless stream of men to serve.

She became more anxious at the thought of being transferred to another location and separated from her friends. It was also difficult to bear the bitter cold she had never experienced before in her hometown in southern Korea.

“When it was so cold that the river was frozen solid, my sisters and I endured it by gathering in one room, hugging each other tightly, crying and talking about our hometowns,” Gong said.

The four girls who depended on each other, gathered around a candle late one night. They dipped a needle in black ink and tattooed the black dots on their wrists.

“We did not know when or where we would be dragged away, so we wanted to remember,” Gong said. “Even these days, when I sleep, these sisters would come out and say, ‘Friend, we miss you, we miss you.’ And they will hold my hands. They were very affectionate people. I miss them to death.”

Not long after she got the tattoo, Gong was dragged away to a military brothel in Harbin, Heilongjiang province, in northernmost China. “I said I was going to die, to the point that I even took rat poison.”

In Harbin, Gong swallowed rat poison. Doctors, seeing her unconscious and her body cold, concluded she was dead. She was put in a coffin and was waiting to be transferred. But just as the coffin lid was about to close, she regained consciousness

“After coming back to life after nearly dying, and regaining my senses, they made me work again.”

Gong said that even on the day she was lifted out of her own coffin, she had to serve Japanese military officials.

At the end of World War II and liberation of Korea in 1945, her life as a military sex slave came to an end. She met a man from Boseong County in South Jeolla returning to Haenam County on the southern coast of the province.

He became her “first love,” she said.

In order not to lose each other on their long journey to their home province, they tied themselves to each other during their travels. They returned to Korea and set up a household. But they were unable to have a child.

Gong’s body had suffered damage through her days as a sex slave. Suffering from a guilty conscience, with a heavy heart, Gong eventually separated from her “first love”.

When she turned 28, she married a 17-year-old boy through an arranged marriage.

Six years after their marriage, they finally had a baby boy. Not long afterward, however, her husband died from a chronic illness.

She collapsed from a stroke in February. Volunteers from a local civic organization visit her each week and take her out on a wheelchair. They are her only outings.

“Before I go, I would like to meet my three sisters, or even their grandchildren, just once,” she said.