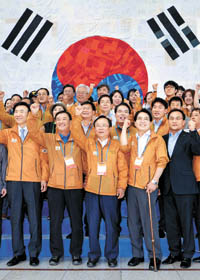 Foreign Minister Yun Byung-se, far left, and other participants in the Eurasia Friendship Express gather at Dorasan Station on the Gyeongui Line in Paju, Gyeonggi, on Monday in a ceremony to close the railway project, which marked the 70th anniversary of Korean liberation from colonial rule and the division of the peninsula. On July 14, more than 200 participants in the project, jointly sponsored by Korail and the Ministry of Foreign Affairs, embarked on a 20-day,14,400-kilometer (8,948-mile) journey through 10 cities across China, Mongolia, Russia, Poland and Germany.[NEWSIS]