Rotary no longer an elite club

Rotary no longer an elite club 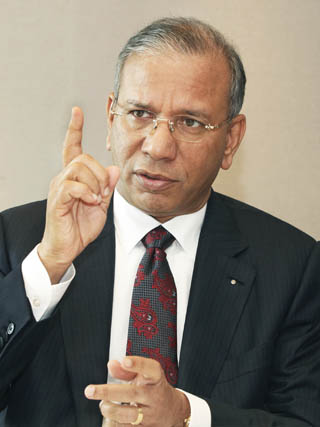 By the time Krishnamoorthi Ratnam Ravindran was named the president of Rotary International, a global network of 1.2 million volunteer leaders, he was a respected businessman who had built one of the world’s largest suppliers of tea bag packaging. Printcare, a publicly listed company with some 700 employees, caters to major tea brands and ships products to nearly 50 countries.

The 62-year-old has been hailed as the first Sri Lankan to hold Rotary’s highest office, a post that came with the role of supporting 34,000 Rotary clubs in coordinating global programs, campaigns and initiatives across borders.

But when Ravindran was asked about his proudest moment in Rotary during his first press conference with local media last week, it wasn’t the more than the 1.8 billion dollars Rotary has raised for the eradication of polio, or the two billion children it has immunized since 1985. It was way more personal.

“When Rotarians put together a machine, which was brought down from somewhere and hooked into my mother when she was dying,” said Ravindran, “that was a very proud moment in my life.”

“When I met a child from Pakistan brought to India - [with transportation fees] paid by Rotary, surgery done and paid by Rotary - goes back home and the parents tell me their child is living thanks to the Indian blood that is running through the child’s body [I felt proud].”

A third-generation Rotarian who gained membership at the age of 21, Ravindran was here to promote Rotary International’s 107th annual convention, which will run from May 28 to June 1 next year at Kintex in Goyang, Gyeonggi.

In explaining why Korea was chosen to host the next gathering, which is expected to attract about 50,000 Rotary club members from over 150 countries, Ravindran said it ticked the box in every category, from infrastructure and hotel accommodations to good airline connections and, “most of all, good, hospitable people.”

“It’s a gateway to the Orient. It’s a mixture of modern tech and Asian culture.”

Rotary members will participate in a broad agenda of plenary sessions, workshops and other cultural activities next year, injecting an estimated $160 million into the local economy, according to the Seoul Host Organizing Committee. It will be the country’s second time hosting the meeting. The first was in 1989.

“If you ask people what they think about Sri Lanka, they’ll either talk about the war or the tsunami; nothing else. It’s true we had war and it’s true we had a tsunami, but that’s not Sri Lanka,” said Ravindran. “By bringing people into a country and have them go back and talk to others, their perceptions change … when they heard Korea, they sometimes may have thought there’s some sort of a war going on here, but arrive and see that life is so different [from what they imagined]. This convention is going to create a very, very positive image [of Korea].”

In a country with 1,616 clubs boasting 62,351 members, the fourth-highest in the world, the convention will feature a variety of activities that the general public can join, including a book donation program, an exhibit showcasing Korea’s technological development and a three-kilometer (1.8-mile) parade in the heart of Seoul.

Ravindran was hopeful that the array of events will spread a charitable spirit in local society and reflect his own philosophy as president of Rotary International: “Be a gift to the world.”

“One of the things that I detest is when I’m introduced as a self-made man,” he said. “Nobody in this world is self-made. Many people help us in small or large ways. … You can’t return this favor to all the people. … Rotary gives you the opportunity to step outside of your skin and become a Martin Luther King or Gandhi.”

For members on the Seoul Host Organizing Committee, the assembly will be a chance to fight against the long-living stigma in Korea that Rotary is a rich man’s club.

“When Korea established its first Rotary club in 1927,” said Lee Dong-kurn, who served as the president of Rotary International from 2008 to 2009, “it was a socially rough time, when people didn’t even have money to buy their own food. Those who joined the Rotary Club of Seoul were better off, because they had that extra cash.”

“But things are changing,” he continued. “Rotary has grown a lot more horizontal in Korea and it’s no longer a group that only wealthy people join.”

Yoon Young-suk, a trustee of the Rotary Foundation, underscored that 85 percent of all members in local Rotary clubs are farmers or owners of mom-and-pop stores.

“When you look at the statistics and find that Korea is the third-largest country [after the United States and Japan] in terms of member funding, it’s astonishing how the so-called rich man’s club is in fact backed by the self-employed living out in the suburbs,” said Yoon.

“This group isn’t about relishing luxury.”