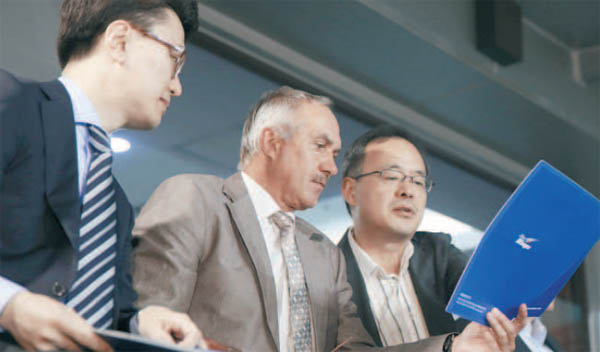 After winning the EAFF East Asian Cup, Uli Stielike has been praised by fans for his strategy and leadership. But every time he’s honored, there’s someone in the background giving himself a little credit, too - Lee Yong-soo.

Lee, head of the Korea Football Association (KFA) technical committee, is the person who brought Stielike to coach the men’s national team.

Lee was with the national team during the EAFF East Asian Cup, where South Korea took the trophy for the first time in seven years after beating North Korea 1-0. When reporters asked him about Stielike, Lee answered, “He thinks about Korean football more than I do. That’s why I appreciate him.”

The first meeting between Lee and Stielike goes back to a year ago. Lee had just become the head of the technical committee and was tasked with finding a new head coach. Hong Myung-bo had resigned to atone for the national team’s poor performance in the 2014 FIFA World Cup. In August, Lee, 56, departed to London to meet candidates.

“We excluded those from South America and Eastern Europe and were looking for candidates from Western Europe,” he said.

Stielike wasn’t his first choice. Back then, Korea’s top candidate was Bert van Marwijk, who led his home country Netherlands to a runner-up finish in the 2010 FIFA World Cup.

“The negotiation with van Marwijk went off because conditions like salary and housing weren’t able to be resolved,” said Lee, who is also a professor at Sejong University. “So we then contacted other coaches, but we got rejected again.”

Another option was Thomas Tuchel, now coach of Borussia Dortmund. The 41-year-old German had experience coaching Korean players like Koo Ja-cheol and Park Joo-ho with German Bundesliga club FSV Mainz, but he didn’t feel quite right for the national squad.

Just as Lee was starting to give up, Stielike appeared. According to Lee, he had some doubts after examining Stielike’s resume. Although the 60-year-old German had an impressive career as defender and defensive midfielder with Real Madrid and West Germany, his coaching reputation wasn’t as stellar.

“My first impression of Stielike was that he is a traditional German grandfather,” Lee said. “It was interesting that he first mentioned experiences of failure rather than his strengths.”

During the job interview, Lee realized that Stielike had stepped down from the Ivory Coast coaching job to care for his ailing son. He was also impressed by Stielike’s reputation for looking after players both on and off the pitch.

“[Stielike] said to me that if he coaches the Korea national team, it will be his last coaching job,” Lee said. “Stielike said he hopes to have a beautiful farewell after the 2018 FIFA World Cup.”

So far, the selection of Stielike has been a success. After taking the job in September, Korea was runner-up in the Asian Cup in January and recently won the EAFF East Asian Cup.

“When the national team coach fluctuates between delight and disappointment after every match, you can’t set a long-term plan,” Lee said. “But Stielike isn’t that kind of coach.”

Lee was also chief of the KFA’s technical committee 13 years ago, contributing to South Korea’s semi-final run in the 2002 FIFA World Cup. However, he quit the job after the event and has been working as a television analyst.

He returned to the job due to a request from the KFA and a personal goal of helping Korean football.

Lee says he wants to improve the overall Korean football system and develop youth programs to nurture new talent for the national squad. He mentioned the cases of France, Germany and Belgium, three countries that jump-started their football program after national team failures by improving their youth programs.

“Instead of winning the World Cup just by a chance, I want to make a national team that can reach the Round of 16 continuously,” he said.

Lee and Stielike have already been taking steps. Stielike, who previously coached the Germany U-19, U-20, U-21 national team, has been making frequent visits to youth football matches in Korea.

Lee is currently in Europe to examine the youth football system there. The KFA said the five-member team, including Lee and Stielike, departed for Europe last Tuesday to analyze the football systems in Germany, Belgium and the Netherlands until Friday.

“I want to build a system that can foster good players whichever coach takes over,” Lee said.