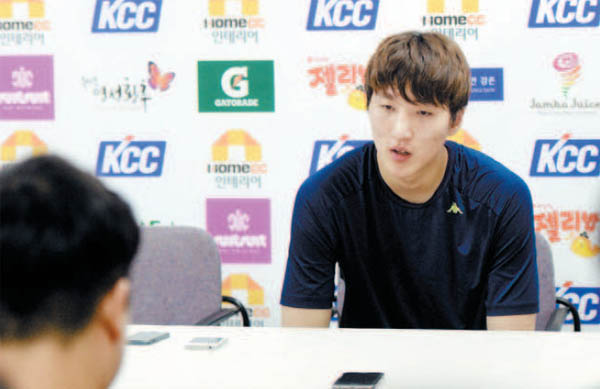 Jeonju KCC Egis guard Kim Min-goo has returned to the basketball court for the first time in 14 months since he drunkenly crashed his car last year.

At the Pro-Amateur Basketball Championship game between the Egis and Kyung Hee University on Tuesday, Kim appeared in the middle of the fourth quarter and bagged three points, three rebounds and one assist in 6 minutes and 51 seconds.

The Egis beat Kyung Hee University, Kim’s alma mater, 76-62 and advanced to the semifinals. They will meet the winner of the game between the Goyang Orions and Chung-Ang University on Thursday.

Kim made his first public apology Tuesday morning, saying that he will keep the drunken driving accident forever in his mind.

“I know [the accident] was my fault, and that any excuses are unacceptable,” he said in a statement. “I have been spending the year regretting and self-reflecting. My apology to people who supported me will be in my heart forever.”

Kim, 24, was a star in his amateur days, leading Kyung Hee University to the college basketball league championship two years in a row, from 2011 to 2012. He was also named the regular season MVP twice during that time.

Kim took the spotlight again during the 2013 FIBA Asia Championship, where he played a pivotal role in Korea taking third place and earning a birth to the FIBA Basketball World Cup. He was chosen as the top shooting guard of the tournament.

The performance in the FIBA Asia Championship gave him nicknames like “the next Hur Jae” and “Goobe Bryant” (a nod to Los Angeles Lakers star Kobe Bryant).

Kim later joined the Egis as overall second pick in the Korean Basketball League (KBL) for the 2013-14 season.

However, on July 7 last year, the 190-centimeter (6-foot-3) guard drove drunk and crashed into a traffic signal pole. The accident damaged both his public persona and his body, as he fractured his right hip joint and damaged the nerves in his right leg.

According to Kim, his leg nerves have recovered only 20 percent. In a game against Kyung Hee University, Kim was able to move around the court, but he wasn’t as fast as before.

“Without wearing medical aid equipment, I still can’t move my right ankle well,” he said. “I want to ask forgiveness from all the people who supported me. In order to give back their love, I think I should return to the court instead of crying for my ankle.”

However, basketball fans are split on Kim’s return because he has yet to receive any punishment for the incident. Neither the Korea Basketball Association (KBA) nor the KBL have ruled on consequences for Kim.

Under their rules, players who committed actions unbecoming of players are subject to punishment. Kim’s drunk driving happened during the national team training session, which makes him eligible for punishment from the KBA.

The KBA previously handed down a six-month suspension to former KCC Egis coach Hur Jae when he was caught drinking during a training session.

The Egis said in a statement that Kim will accept whatever punishment is given, but asked fans to give him a second chance.