With new teams, loaned K-League players better than ever

With new teams, loaned K-League players better than ever 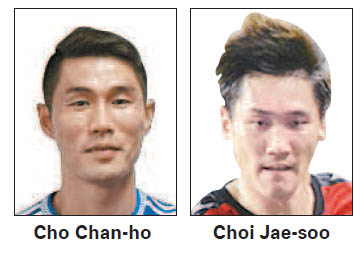 Players on loan in the K-League Classic showed killer performances last week, but can they do the same again?

Over the weekend, the Suwon Samsung Bluewings saw forward Cho Chan-ho, on loan from the Pohang Steelers, lead the team’s 4-2 victory against Jeju United on Sunday. When Suwon was trailing 2-0, Cho notched two goals to even the score and then assisted teammate Lee Sang-ho and Kwon Chang-hoon to deliver the team’s come-from-behind win.

The victory allowed Suwon to chase league No. 1 Jeonbuk Hyundai Motors by seven points. Suwon will try to narrow the gap when it faces Seongnam FC tonight at home.

Cho joined Suwon from Pohang last month after the two teams agreed to swap him and left back Choi Jae-soo for six months.

In a match against Jeonbuk on Saturday, Choi scored a free kick to put Pohang first on the board. Pohang, currently third in the league, eventually won the match 3-0.

In March 2013, when the 29-year-old was playing for Pohang, Cho made a big impression on Suwon coach Seo Jung-won. The match was fierce, with the cross bar hit five times. Cho didn’t score a goal, hitting the cross bar twice, but helped his team’s 2-0 victory.

In March last year, he picked up a big injury against Suwon after colliding with goalkeeper Jung Sung-ryong. Cho tore a ligament in his right knee and was forced to take the season off.

“Cho later told us that back then, he was about to take knee surgery anyway because his ligament was already worn out,” a Suwon official said. “He even joked that he thanks Suwon for making him get the surgery earlier than planned.”

Cho has been considered a boost to Suwon’s right flank offense. While team captain Yeom Ki-hun, the league leader in assists at 11, takes care of the team’s left flank, the right side had not been protected with Seo Jung-jin and Ko Cha-won.

“Because I was a wing forward, I’ve been watching Cho Chan-ho for long time,” Suwon coach Seo Jung-won said.

While Cho is helping his new team’s attack on the right, Choi is helping Pohang’s defense on the left. The 32-year-old defender was having a difficult time with Suwon recently, with Yang Sang-min and Hong Chul taking over the left back position, but he seems to be finding his rhythm with Pohang.

Choi will try to show another impressive performance tonight against Ulsan Hyundai, the team he played with from 2010 to 2012.

“Since Choi came, our plays on the flank have more cushion,” Pohang coach Hwang Sun-hong said. “I’m satisfied with his experience and how he plays in the match.”

Cho and Choi will take on their original teams Aug. 30, when Pohang hosts Suwon. Usually, teams who lend their players insert a clause that states players on loan can’t feature in a match against their original team. However, according to Pohang and Suwon officials, they didn’t include this clause when they signed the deal.

With Cho and Choi doing so well on their new teams, sports pundits expect other squads to be more aggressive about borrowing players.