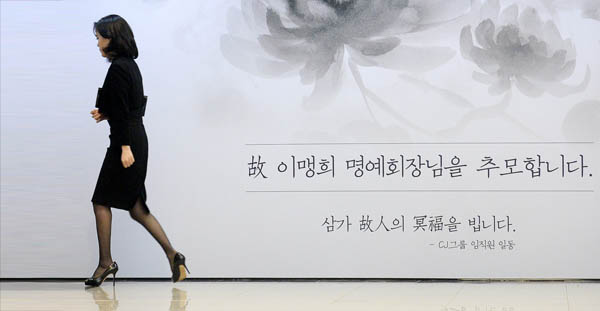 Family and friends joined with prominent business leaders of Korea Inc. as well as incumbent and former high-ranking government officials and politicians to show their last respects to the ill-fated prince of Samsung history Lee Maeng-hee.

Many of the family members, including Maeng-hee’s nephew and apparent heir to Samsung Group Jay Y. Lee, showed up at the funeral parlor at Seoul National University Hospital in Hyewha-dong, central Seoul, late Tuesday, a day before CJ Group officially started accepting visitors.

The first to arrive at the funeral home was the eldest of Maeng-hee’s siblings, Lee In-hee. The 87 year-old advisor to Hansol Group, came to her brother’s funeral in a wheelchair around 7 p.m. on Tuesday while the younger sisters, Lee Sook-hee (80) and Lee Soon-hee (77), joined their elder sister. After an hour Samsung Group Chairman Lee Kun-hee’s wife Hong Ra-hee (70), escorted by her oldest daughter and Hotel Shilla CEO Lee Boo-jin (45), arrived at the funeral home.

The youngest of Maeng-hee’s siblings, Shinsegae Group Chairwoman Lee Myung-hee (72), as well as her son and vice chairman of the retail giant Chung Yong-jin (47) also attended.

The apparent heir of Samsung Group and Vice Chairman of Samsung Electronics Jay Y. (47) arrived at the hospital at 9 p.m. without an entourage. Without any words Jay Y. was escorted by cousin and younger son of Maeng-hee, Lee Jae-hwan (53).

He talked to Sohn Kyung-shik, CJ Group Chairman and brother-in-law of late Maeng-hee, briefly and left 17 minutes after.

On Tuesday and Wednesday CJ Group Chairman Lee Jae-hyun, who is also the eldest son of the late Maeng-hee, did not attend. He suffers from severe health problems including complications from kidney surgery he got in 2013 as well as a genetic disorder called Charcot Marie Tooth disease.

SK Group Chairman Chey Tae-won, who was recently released from prison, was the first to make an appearance on Wednesday morning.

“Chairman Lee Jae-hyun and I were friends from younger years,” said Chey, who arrived after 8.20 a.m.