Residents in hot pursuit of best ways to cool down

Residents in hot pursuit of best ways to cool down

A wide range of electric fans are on display at the Yongsan Electronics Market in central Seoul. Hot weather is driving people to late-summer purchases. [NEWSIS]

As temperatures soar across the country, sales of just about anything to help residents cool down have become red hot items.

Sales of air conditioners, electric fans, bamboo mats, soda and water, which are usually slow-selling at the end of the summer months, are skyrocketing as many people are looking for ways to help them beat the heat.

“There is an air conditioner in my office. But I visited this shop to buy an additional electric fan,” said Han Jin-joo, a female worker who was shopping at electronic retailer Hi-Mart in Yeongdeungpo District, western Seoul on Aug. 10.

“I’d like to put this near my seat to stay cool,” she said. 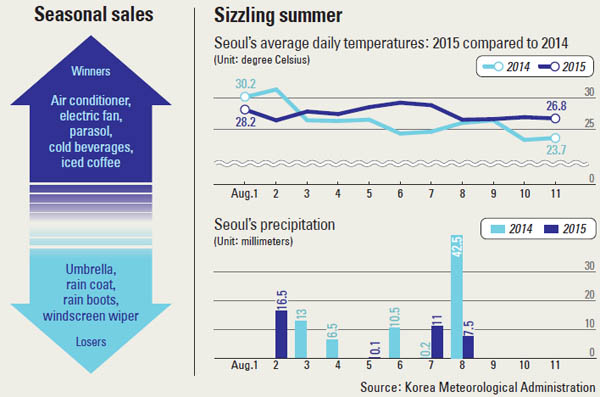 Her efforts to cool down are understandable based on weather charts.

The nation’s weather agency has said that this year is the hottest summer in 47 years, with low precipitation levels pushing up the heat during peak hours.

Average temperatures between Aug. 1 and Aug. 10 this year were recorded at 27.7 degrees Celsius (81.86 degrees Fahrenheit), 1.1 degrees higher than the same period last year, according to the Korea Meteorological Administration.

Attempts to overcome the heat are putting a smile on the faces of store owners and manufacturers.

“As the heat wave struck the country in August, sales of air conditioners and electric fans dramatically rose,” said Kim Nam-yul, head of the Yeongdeungpo Hi-Mart.

“Consumers typically would buy either air conditioners or an electric fan,” the branch head said, “But this year, they have them together to better stave off the summer heat and also save energy.”

Hi-Mart said its sales of air conditioners rose by 200 percent between July 28 and Aug. 3 compared to the same period last year. The electronic retailer saw soaring sales in Daegu and North Gyeongsang, known for higher summer temperatures than other regions.

Sales of air conditioners at Hi-Mart branches in Daegu jumped by a whopping 590 percent between July 28 and Aug. 3 compared to the same period last year.

E-Mart, the largest discount chain in the nation, said the surging sales of air conditioning and electric fans in August is offsetting the sagging sales earlier this year after the outbreak of Middle East respiratory syndrome.

Sales of air conditioners from January through July fell by 33.6 percent year-on-year. At the beginning of August, however, units began to sell like hot cakes. Between Aug. 1 and Aug. 12, revenue from household appliances went up by 143.6 percent.

“Consumers were cautious about buying big household appliances earlier this year,” said a representative of E-Mart.

“But as the virus subsided and the heat wave hit the country, people started coming back to buy cooling machines.”

As well as air conditioners and fans, other cooling items, such as water, soda and bamboo mats, all jumped off the shelves.

Sales of ice from July 26 to Aug. 1 rose by 155.1 percent from two weeks ago, according to Lotte Mart, a local discount supermarket chain.

The supermarket chain said sales of bottled water increased by 41.6 percent and soda by 39.8 percent, over the same two-week period, and cooling cushions and bamboo matting saw sales increases of 64.8 percent and 57.1 percent, respectively.

Byun Ji-hyun, head of the marketing division at Lotte Mart, said that the distinctly hot weather with less rain decided the fate of weather-sensitive items.

While some opt to take refuge in their air-conditioned homes, others are willing to get active and chill out in water parks. People have flocked to the Caribbean Bay water park inside the country’s largest amusement park, Everland in Yongin, Gyeonggi.

“This year saw a large number of visitors because of the scorching hot weather,” said Kang Seok-hyun, a senior manager at Cheil Industries, which owns Everland.

Not surprisingly, the dry weather has had the opposite effect on rain-related items.

Sales of umbrellas dropped 41 percent compared to two weeks ago, while rain boots and raincoats also suffered a decline in sales by 30.5 percent and 56.4 percent from two weeks ago.

Windscreen wipers were also in short demand. Sales decreased by 20.2 percent compared to two weeks ago.