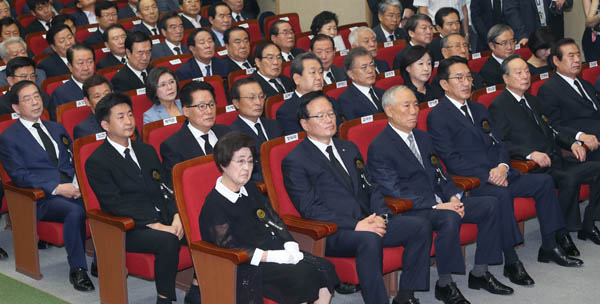 Lee Hee-ho, far left, the widow of the late president Kim Dae-jung, and political leaders from both the ruling and opposition parties attend on Tuesday a memorial to commemorate the sixth anniversary of Kim’s death, at the Seoul National Cemetery. By Kim Kyung-bin

Major political players on both sides of the aisle remembered former President Kim Dae-jung at a ceremony commemorating the sixth anniversary of his death, praising the leader for risking his life for democracy during years of dictatorship.

Among the politicians present at the commemoration held at the Seoul National Cemetery on Tuesday were Chairman Moon Jae-in of the opposition New Politics Alliance for Democracy (NPAD) and ruling Saenuri Party leader Kim Moo-sung, along with a number of former and sitting lawmakers. The former president died of complications from pneumonia in 2009 at age 85.

While many lawmakers gathered to mark the occasion, the scene was tense because NPAD lawmakers critical of Moon’s stewardship of the party, and who are considering leaving to create a new group, were present.

The anti-Moon group is mostly comprised of lawmakers who had served under the Kim Dae-jung government in a power struggle that split across many factional lines within the party.

Despite the tension, lawmakers were united in remembering the political achievements of the late president, who is credited with paving an uncharted path for improving ties with North Korea. Many South Koreans viewed the North with animosity before Kim’s famous Sunshine Policy aimed to end its isolation through engagement.

Kim won the Nobel Peace Prize in 2000, after holding the first-ever inter-Korean summit with late North Korean leader Kim Jong-il in Pyongyang earlier that year, in recognition of his efforts.

“If it weren’t for Kim Dae-jung, Korea’s political spectrum would have been entirely tilted toward one side [the right]. In the name of the Sunshine Policy, Kim opened the door for South Korea to assume the diplomatic initiative in the region and inter-Korean ties,” said Moon.

Using the occasion to remember Kim’s role in easing tensions on the peninsula, the former presidential candidate criticized the two conservative governments that followed the liberal governments of Kim Dae-jung and Roh Moo-hyun, saying that the late Kim would have been “devastated” to see the currently frozen inter-Korean relations.

Saenuri Chairman Kim echoed Moon’s praise for Kim Dae-jung, saying Kim Dae-jung was a leader who had “brought democracy to Korea through his unwavering resolve and opened a new chapter for inter-Korean relations,” adding that Kim’s achievements “should be recognized more.”