Redeeming her life by sending kids to school

Redeeming her life by sending kids to school 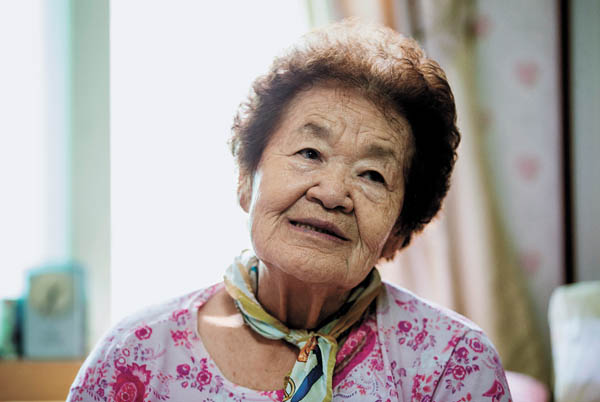 Kim Gun-ja, a survivor of wartime sexual slavery, shows her Dongbaek Medal, below, last month at the House of Sharing, Gwangju, Gyeonggi. She donated her life earnings to charity to help educate impoverished children, as she was, and says that’s her one joy in life. By Kim Seong-ryong

The JoongAng Ilbo collected the oral histories of 13 survivors of sexual slavery during World War II over the past month. As all the women are in their 80s and 90s, this may be their last record of their personal stories. The series marks the 70th anniversary of Korean liberation from colonial rule and the JoongAng Ilbo’s 50th anniversary. This is the second in the series.


“I thought I was simply running an errand,” says Kim Gun-ja, 89, a survivor of sexual slavery at a Japanese military brothel in China, recalling the fateful day she left her house as a teenager, empty-handed and overly trusting, which changed her life forever.

As she sat for an interview with the JoongAng Ilbo on July 22 at the House of Sharing, a home for the elderly comfort women survivors in Gwangju, Gyeonggi, Kim described her life as a “hapless” one.

Later in life she began to wonder if the hardships in her life could be blamed on her lack of a proper education. As a result, Kim has dedicated her later years to helping impoverished, orphaned children get the education she didn’t. She has donated all the money she earns to them because they remind her of herself seven decades ago. 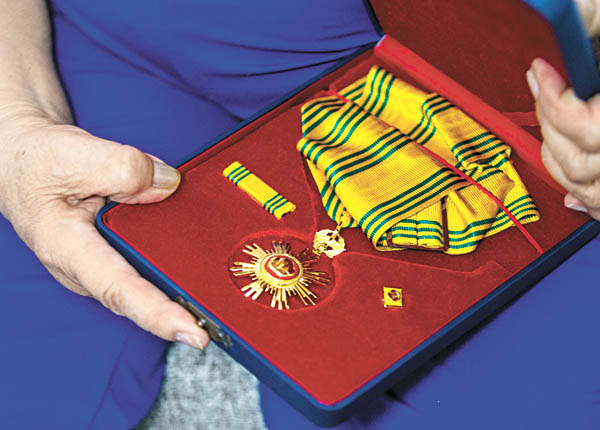 Scholars estimate that up to 200,000 young women and girls, many of them Korean, were forced into sexual slavery by the Imperial Japanese Army during colonial rule (1910-45) and World War II and made to serve in military brothels throughout Asia. They are euphemistically referred to as comfort women. Out of the original 238 women who registered with the Korean government as sex slave victims in the 1990s, only 47 remain alive.

“We were poor, and it was hard to even get enough to eat, so the three of us scattered,” she recalls. “The youngest was sent to someone else’s house, and I was sent as an adopted daughter to a police officer’s home in Cheorwon County, Gangwon. I was told that I would live in luxury if I went to that house.”

In her new home she met a young man who made her “heart flutter.” The boy used to visit her adoptive father’s house often.

“I grew to know him over the course of a year. We didn’t hold hands or anything, and we just liked each other.”

But their relationship didn’t go smoothly because his family opposed.

“In olden days, if the adults of the household were like that, we couldn’t do as we pleased. I didn’t know why, but I was scolded and told we couldn’t date.”

The youth later married another girl due to pressure from his family.

At 16, Kim was sent to a military brothel of the Japanese army.

“It’s a place where you can earn money,” were the last words she was told by her adoptive father as she left his house. “If you go there and think you won’t be able to earn money, then you can always return home.”

She was wearing a hanbok with a spring green top over a black skirt. She followed a man in a military uniform.

Kim was put on a freight car for an overnight journey and the next day transferred to a truck.

After a long ride, she arrived at a comfort station in Hunchun, Jilin Province, northeastern China.

Kim, who had just begun menstruating, had to service ranking officers during the weekdays and regular soldiers on the weekends.

“None of them came by themselves” she recalls. “They came in groups, in trucks or sometimes they walked. Then they waited in swarms inside the rooms. There were 100 more waiting outside.”

She couldn’t even dream of escape. “Girls who tried to escape and were caught were beaten to a pulp. We were guarded very severely,” she says. “When I think of those days, it is wearisome, sad and sickening.”

The worst part was losing hearing in her left ear, which happened almost immediately.

“The first person that entered was an officer, and because I couldn’t understand Japanese, he smacked my ear… My eardrum ruptured.”

Because she did not receive proper medical treatment, she lost her hearing in her left ear.

Korea was liberated from Japanese colonial rule in 1945, and at first, Kim didn’t know what it meant.

The supervisor at the comfort station told her, “Go where you want to go.” That was liberation for Kim.

With a group of seven friends from the military brothel, Kim passed Mount Paektu and crossed the Tumen River.

Just as when she left home, Kim was penniless.

“I didn’t even know what I ate. I slept in empty houses. I was a complete beggar.”

Kim eventually arrived in Hoeryong, a city in North Hamgyong Province in North Korea, on the other side of the Tumen River, bordering with China. She got a ride on a truck to Cheorwon, but she did not seek out the adoptive father who had sent her away.

Walking down a street, she met her first love.

He told her that he had returned from conscripted labor for the Japanese.

Because Kim had nowhere to stay, she went south to her hometown and sought solace in a Buddhist temple.

“Because I had such a hapless fate, I was curious why it was so and began going to a temple. I thought I might find an answer through prayer, that maybe I would come to a realization.”

For 30 years, she attended a temple. Then for eight years, she dedicated herself to a cultish so-called new religion. But in 1997, she converted to Catholicism and was baptized as Johanna.

Though she sought the help of many religions, she still could not find an answer to why her fate had been so wretched.

She lived alone her whole life. She scraped by doing any work that came her way.

“I worked in domestic service and sold bread in Gangneung [in Gangwon]. I sold American goods in Namgajwa-dong [in Seodaemun District in Seoul] and because customs kept stripping away tax, I began selling clothes. I bought clothes from Peace Market [in Dongdaemun District] and sold them at Samcheok [in Gangwon]. When it became too difficult, I returned to working in domestic service.”

When asked how she was able to hold up despite such hardships in life, she paused for a moment. Then, she slips her hand into blankets stacked under her bed and withdrew a blue chest. She revealed a gleaming gold Dongbaek Medal, an Order of Civil Merit award, she received from the Blue House last December.

The government had thanked Kim, who had over the past decade and a half donated over 200 million won - her entire life savings - to better education opportunities for children in need.

Kim saved the money she made from selling clothes and the monthly stipends she received from the Korean government.

“I was only able to spend eight months studying at a night school. I lost my parents at a young age and thought my life may have been so difficult because I wasn’t able to learn anything… If I had been able to be educated just a little bit, life may not have been so hard.”

Kim continues, “I wanted to help give children who were poor and parentless a chance to learn.”

She said she never used her money on herself. After she went to live at the House of Sharing in 1998, she began to save up every penny and said her joy in life was to see children gain the opportunity to study through that money.

“Now, I have nothing,” she says. “There is no money left in the bank. Zero won.”

When asked if she didn’t feel empty after giving away all of her hard-earned money, she replies slowly, “I am 10 years older than the combined ages of my father and mother when then died.” Her father died at 51 and mother at 29.

“My younger sister passed away 20 years ago and my youngest sister also passed away in January of this year,” she continued. “I only wish that I can pass graciously in the remaining days I have left.”

Kim says, “I feel like I am wasting money if I spend it on myself, but I don’t think it’s wasteful at all donating it. It’s fine to have just enough clothes so that they don’t smell and food and lodging is covered here [at the House of Sharing.]”