When Korea lost a first lady, I lost an in-law, friend

When Korea lost a first lady, I lost an in-law, friend 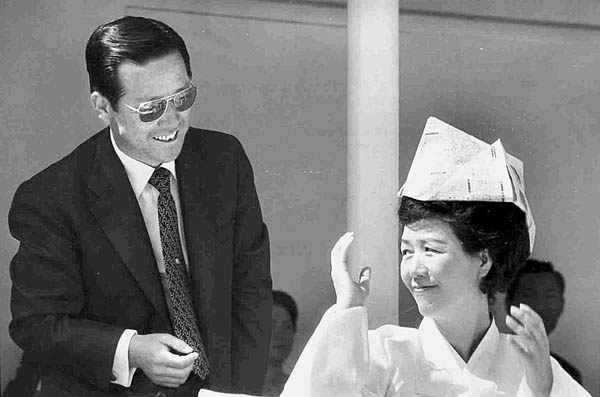 On a bizarrely cloudy Liberation Day on Aug. 15, 1974, I was at the Samhwa Farm in Seosan, South Chungcheong. President Park Chung-hee gave me a few days off since there was not much work to do.

The ceremony for the 29th anniversary of Liberation Day was held at the National Theater in central Seoul and aired live on TV. At 10:23 a.m., when Park said, “Unification of the two Koreas must be made in a peaceful way,” two gunshots were heard suddenly and the screen went black.

I waited nervously and the intelligence unit of the Prime Ministers’ Office called me at 10:40 a.m. He said President Park was all right but the First Lady was shot and was taken to the Seoul National University Hospital. I had to come back to Seoul immediately.

I could not ride in a helicopter due to the bad weather, and it was after 4 p.m. when I got to the hospital. They told me that First Lady Yuk Young-soo had a wound in her head by a bullet fired by Mun Se-gwang. Her condition was almost hopeless but she underwent an operation for five hours. 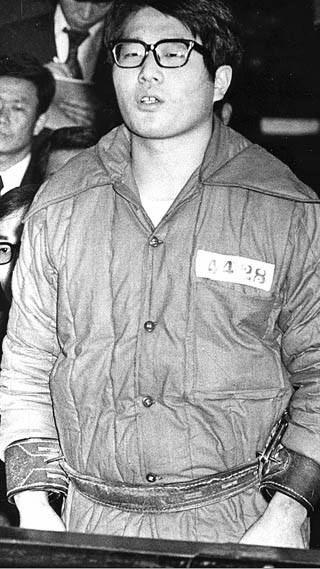 Moon Se-gwang speaks at his appeals trial on Nov. 20, 1974. The court handed down a death sentence for killing First Lady Yuk Young-soo and espionage and it was carried out in December 1974. [JoongAng Photo]

I presided over a Liberation Day celebration at Gyeongbok Palace instead of Park. I greeted guests and came back to the Blue House.

Park was quietly looking down on downtown Seoul from the second floor of the Blue House, wiping tears from time to time. I couldn’t say a word. At around 7 p.m., a guy came in and reported that Yuk had passed away. The news made Park cry his eyes out. I’ve never seen him cry that sadly.

Park and Yuk were a loving couple. Yuk supported Park through their 24 years of marriage. She must have been disappointed by Park at some points, but she didn’t reveal it. Yuk was a sweet and devoted wife to Park.

Yuk also helped the marginalized people of Korea. She formed a volunteer group named Yangjihoi to support lepers. She was the first person who taught people what the first lady should do.

In September that year, when my wife was getting close to delivering our first daughter Ye-ri, I had to go to the United States to study at U.S. Infantry School. Yuk took good care of my wife. After Park was sworn in as president, I met with Yuk every time I went to the Blue House. When she was not on the first floor, I went up to the second floor to personally see her.

I remember in April 1971, when we were campaigning in the presidential election together. The sun was too bright, so I made a cone hat out of the brochure from the party and placed it on Yuk’s head.

When I said, “It’s beautiful,” she smiled like a girl.

There was an incident that now sounds like an evil auger. In the early ‘70s, a frontline military base shot dead a deer and the division commander sent it to the Blue House, thinking the deer meat would be good for the president’s health. The next day, Yuk’s mother Lee Gyeong-ryeong was looking around the Blue House as usual, and as she went by the main gate, she saw the deer carcass carried in on a stretcher. Surprised, she snapped.

“Hey, why are you bringing that here? Get rid of it immediately.”

The guys carrying the animal said it was a present from a division commander on the frontline. Lee was adamant in sending it away.

Yuk later heard the story from Lee and said, “Mother, you did the right thing.”

It was two years before she passed away.

Security at the National Theater was lax. At the time, we didn’t have metal detectors at the Gimpo Airport. Moon Se-gwang didn’t have an invitation, but the police guards thought he was an invitee because he spoke Japanese. Moon came in with a pistol on his belt.

The guards later explained they couldn’t properly screen guests because Yuk complained to them after foreign ambassadors’ wives weren’t happy with the theater’s excessive security for the national holiday, which commemorates the March 1 Independence Movement in 1919.

Soon after the ceremony began, Moon, sitting in the back, pulled out his .38-caliber Smith and Wessen revolver and ran toward the stage, shooting toward Park. The first bullet hit the left side of the podium and Park crouched behind the bulletproof podium. Moon tried to run toward Park and he lost his footing and slipped. He accidently fired the revolver and the bullet hit Yuk.

Presidential Chief Security Officer Park Chong-kyu first spotted Moon and came in front of the stage and fired back at Moon, but the lighting on the stage was so bright that it blinded him. He didn’t know where he was shooting, and unfortunately a high school student in the audience was killed.

National Assembly Speaker Chung Il-kwon lay down and hid behind Yuk. It wasn’t very appropriate for a former four-star general.

The funeral for Yuk was a national funeral. On Aug. 19 at the plaza in front of the General Government Building, about 2,900 people including Park’s children - Geun-hye, Geun-ryeong and Chi-man - celebrities and foreign envoys gathered for the send-off.

As the head of the preparatory committee for the funeral, I wrote a eulogy and read it at the ceremony. It was very heart-rending and some of the participants burst into tears.

The assassination also cast a shadow over the relationship between South Korea and Japan. As Prime Minister, I sent a letter to Japanese Prime Minister Kakuei Tanaka on Aug. 22. The revolver that Moon used to kill Yuk was one he stole from a police station in Japan. The Japanese government sent Liberal Democratic Party Deputy Chairman Etsusaburo Shiina as an envoy to Seoul and delivered a letter to President Park.

After visiting the president, Shiina came to me. I emphasized that the Japanese government was responsible for the incident and asked him to restrict the pro-North General Association of Korean Residents in Japan, which Moon was from.