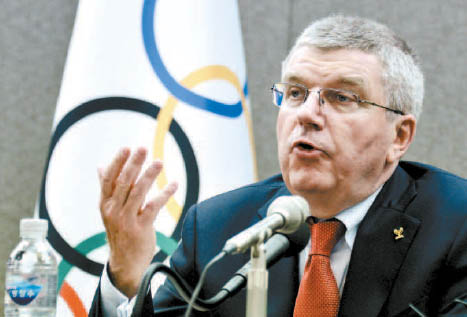 Thomas Bach, the president of the International Olympic Committee, speaks during a press conference in Seoul. [NEWSIS]

Thomas Bach, president of the International Olympic Committee (IOC), said Wednesday he is satisfied with preparations for the 2018 Pyeongchang Winter Games.

The ninth president of the IOC visited Korea for two days before departing for China on Thursday, where he will attend the opening of the 2015 IAAF World Championships in Athletics, kicking off Saturday in Beijing.

“Great progress has been made since my last visit,” he said in a press conference in Seoul on Wednesday. “It’s really a pleasure to see how construction is coming off the ground and how operations are making progress.”

Bach had a tight schedule on Wednesday. After attending a luncheon with Cho Yang-ho, head of the PyeongChang Organizing Committee for the 2018 Olympic & Paralympic Winter Games (Pocog), along with representatives from the corporate sponsors of the 2018 Winter Games, he visited the Blue House and met with President Park Geun-hye.

“It was a very important opportunity to experience ... the great commitment from President Park to assure the success of the 2018 Winter Games,” he said.

This is the third time Bach has met with Park since becoming president of the IOC in September 2013. He previously met with her in November 2013 and September 2014 before the opening of the Incheon Asian Games.

“You have two IOC members just like Germany and you can already see Korea is well-represented [in the IOC],” he said. “But there will be changes next year. We have to respect our rules.”

“I have the 10th dan, so you better behave now,” Bach joked to local reporters.

When asked about whether the IOC is encouraging the participation of North Korea in the 2018 Winter Games, Bach said the IOC is helping all countries train their athletes to qualify for the games.

This year, North Korea has not participated in sporting events held in South Korea, boycotting the Gwangju Summer Universiade and announcing it will not participate in the Military World Games in Mungyeong, North Gyeongsang, this October.

“If there is a special need in assistance for athletes from North Korea, the IOC is ready to look into this and support them,” he said.

Bach said he has big expectations for big air snowboarding, which will debut as an Olympic sport in the 2018. According to Gunilla Lindberg, head of the IOC’s Coordination Commission on Pyeongchang, the International Ski Federation and Pocog are evaluating three possible venues for the event.