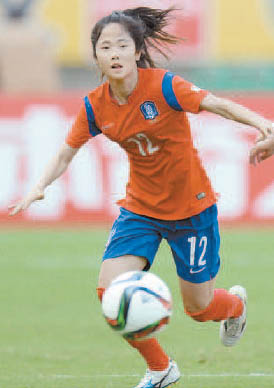 Lee Min-a dribbles in a match against North Korea at the EAFF East Asian Cup in China on Aug. 8.[NEWSIS]

There was no fairy-tale run for the women’s national football team earlier this month, with the squad finishing second to North Korea at the EAFF East Asian Cup. But the event did offer up one Cinderella story: attacking midfielder Lee Min-a.

Lee, 23, wasn’t originally on the EAFF Cup roster, but joined the team after forward Yoo Young-a was dropped due to injury. From the second she stepped onto the pitch, Lee captivated local football fans with her energetic plays.

“Even Chinese football officials and reporters asked who she was,” said Yu Dae-woo, the general manager for South Korea during the tournament. “She looks like a martial arts girl who appears in Chinese kung fu movies. She really runs well on the pitch.”

Lee, who plays for the Incheon Hyundai Steel Red Angels in the WK League, is already well-known for her looks and fashion sense.

In the 2013 WK League All-Star match, she made a splash by wearing a jersey with the name “Kim Tae-hee” printed on the back, after the actress known for her beauty.

In an interview last week with Ilgan Sports, an affiliate of the Korea JoongAng Daily, Lee talked about the acclaim she got from the event, football and fashion.

Q. How do you feel after the EAFF East Asian Cup?

A. I didn’t sleep much after we lost to North Korea. Personally, I feel bad that I couldn’t score a goal even though there were many opportunities. But I’m happy and honored that I was given the opportunity to play a full 90 minutes for the national team for the first time through this tournament.

You were not in the original roster but got a spot at the last minute.

That’s right. I first wondered whether I’d actually play in the tournament. You know you can spend time in the tournament just warming the bench. When coach Yoon Duk-yeo told me that I was a starting member for the match against China, I was really happy. Since I had spent a lot of time preparing for the opportunity, I wasn’t worried.

How do you feel becoming the squad’s ‘Cinderella?’

I noticed that followers of my SNS account soared. I didn’t check my SNS during the tournament, but I just noticed that the number of followers is now over 4,000, which is up from 1,200. I’m just so thankful for fans’ attention.

You also got a lot of attention for your fashion.

I have a big interest in clothes. Since I train so much, I don’t have a lot of time to shop. So I usually buy my clothes online. But to tell the truth, I don’t have much time to wear anything other than my football uniform - just one day in a week.

So how do you dress and what do you do in your free time?

I like to wear skirts because when I’m not exercising, I want to look like a woman. Once a week, I like to take a photo wearing my beautiful clothes. I also like to go on drives with my friends.

Do you have a nickname your friends like to call you by?

No. They just call me by saying, “Hey!” But I do have celebrity doppelgangers. I like to think I look like child actress Park Min-ha and [K-pop group] Girls’ Day’s Minah. I’m sorry - I shouldn’t compare myself to Minah (laughs).

Do you have a boyfriend?

No. I like a man who is humorous and fashionable, just like comedian Yoo Jae-suk. Since I’m interested in clothes, I want to be the fashion coordinator for my boyfriend.

Who is your role model when it comes to football?

I like Jeonbuk Hyundai’s Lee Jae-sung. Of course, he is a much better player than me, but I think we have a similar playing style. Among foreign players, I like those who play for FC Barcelona in Spain. I want to pick Lionel Messi, Andres Iniesta and Xavi Hernandez, who has now moved to Qatar.

In the EAFF East Asian Cup, some players based overseas were missing. Forward Yoo Young-ah is also expected to be back soon.

She is my competitor, but at the same time, there are many things that I can learn from her. I want to play together with her and improve the things I’m not good at. At the same time, I want to display my strength, which is energetically running over the pitch.

I want to play in the Summer Olympics in Rio de Janeiro next year. What I felt through this tournament is that the national team uniform really suits me. I don’t want to take it off. I will work hard and prepare thoroughly for the competition.