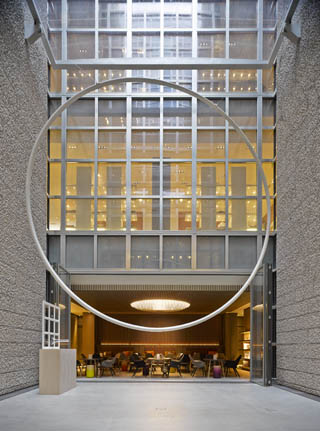 For that reason, tradition and artisanship are extremely important to Hermes.

But at the same time, the brand values novelty and innovation more than anything else.

And the pursuit of these two seemingly different traits - tradition and novelty - is extremely evident in the company’s diverse patronage programs in the area of culture and arts internationally and domestically.

Pierre-Alexis Dumas, the president of Fondation d’enterprise Hermes, wrote in an editorial in the foundation’s activity report last year that the company is “concerned about preserving things which might otherwise be lost, but equally curious about novelty and invention.” 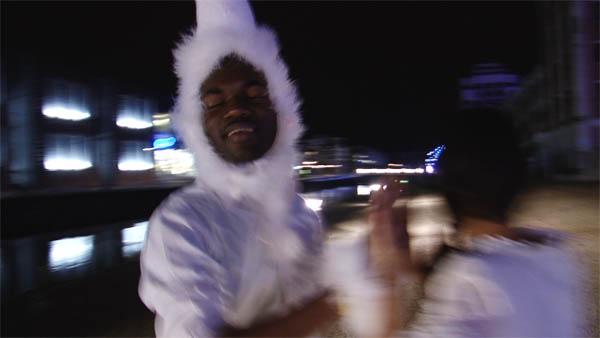 The current exhibition at Atelier Hermes is “Rose-Garland Crown,” by p. 2. “The Woman with a Movie Camera.” Provided by Hermes Korea

The company in April of 2008 launched the foundation to better execute its patronage programs worldwide.

Officials at Hermes Korea, which opened in 1997, also told the Korea JoongAng Daily that two important elements of the company’s patronage efforts are “promotion of traditional craft skills” and “support for the creative arts.”

The Korea JoongAng Daily examined Hermes’ and Hermes Korea’s patronage programs in the field of culture and arts.

P. 2, a project group launched by artists An Jung-ju and Jun So-jung, is also an unlikely duo.

Although both work with videos to depict the world they see, their work processes have been distinct. That’s perhaps why although they’ve known each other for some time now, their current exhibition at Atelier Hermes is their first collaboration.

In “The Woman with a Movie Camera,” images of a woman who is constantly shooting something with a camera and images of a young black swan growing into a beautiful white swan intersect.

In the video, the woman documenting life with the camera represents the artists themselves, according to officials at Atelier Hermes.

“Nude Model” is about nude models and their implications. In Western art, nudity is considered an absolute beauty. And teaching students to draw these nude models is a habitual practice in Korean art classes.

And “Makers” is more of a philosophical piece. It is based on a wild assumption that in the world we live in, there is a separate person who produces the sounds of everything that happens.

Hermes believes the two artists’ differences made this collaboration more fun and meaningful.

“P. 2’s approach confronts and reveals two very different, often opposing creative processes. Their point of convergence is the shared theme of resistance to indifference and the pressure of collective conformity on individual lives” the Fondation d’entreprise Hermes said on its website. “[The company] supports this project as part of its commitment to spotlight the creative process and new artistic collaborations.” 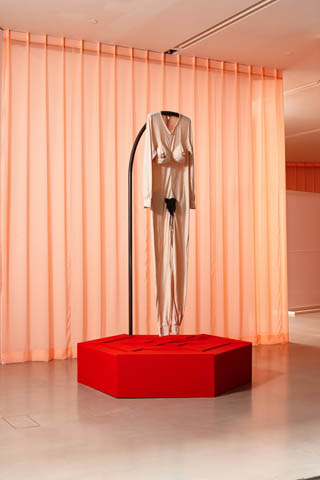 It is one of seven art spaces that the Hermes Foundation operates worldwide. The others are located in Brussels; Tokyo; Singapore; New York; Bern, Switzerland; and Saint-Louis-les-Bitche, France.

Kim Hee-joo, one of the publicists at Hermes Korea, told the Korea JoongAng Daily that “Atelier Hermes is one of the company’s art spaces whose activities stand out the most.”

According to officials at Hermes Korea, the art space holds four exhibitions a year on average. In particular, last year was a memorable year for Atelier Hermes.

The space underwent renovation and moved to a different floor, later reopening its doors to the public with the large-scale exhibition “Condensation,” where a total of 16 contemporary artists with various cultural backgrounds presented their works after taking part in residencies at the Hermes workshops in France between 2010 and 2013. They included Korean artist Oh You Kyeong.

What was unique about the show was that it was a touring exhibition. It was initially held at the Palais de Tokyo in Paris and then traveled to Le Forum in Tokyo, before eventually coming to Atelier Hermes in Seoul. 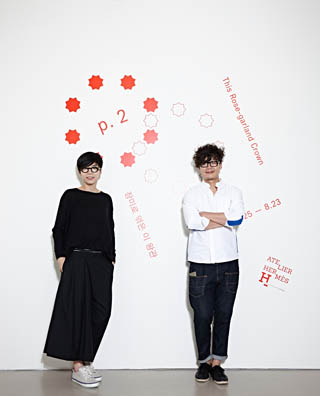 P. 2 is a project group consisting of artists An Jung-ju and Jun So-jung. Provided by Hermes Korea

“The Condensation tour has enabled us to experiment with new connections between the works and the foundation’s exhibition spaces,” Gael Charbau, who curated all three shows in three different locations, said, adding that he attempted to make the best use of each art space.

“At the Atelier Hermes in Seoul … the scenography was structured by display panels covered in stainless steel - a common feature in Seoul architecture. The works, the exhibition space and the visitors were all reflected in the panels, creating curious, superimposed images that established a continuity between various elements present in the show,” he said.

Kim of Hermes Korea said that for now there is no touring exhibition, like the “Condensation” exhibition, planned for Atelier Hermes in the coming months.

However, she pointed out that the upcoming exhibition of Jeong Geum-hyung, winner of the 16th Hermes Foundation Missulsang, somewhat shares the spirit of the “Condensation” exhibition.

Jeong will be taking part in the residency at Cite Internationale des Arts in Montmartre, Paris, where artists from around the world gather for four months to prepare for the exhibition. She will also work closely with French artist Emmanuel Saulnier during the residency program.

Jeong Geum-hyung’s solo exhibition is set to take place in September of next year, officials at Hermes Korea say.

Hermes Korea in fact launched the art award, the Hermes Foundation Missulsang, back in 2000 with hopes of discovering new talent and energizing Korea’s art scene. The company says it was the first foreign firm in Korea to organize such an award program.

And with the opening of Atelier Hermes in 2006, the winners got to hold solo exhibitions at the art space. Past winners of the Hermes Foundation Missulsang include Bahc Yiso (2002), Suh Do-ho (2003) and Park Chan-kyung (2004).

The 16th Hermes Foundation Missulsang, according to Hermes Korea officials, will be different from the previous awards in that it will become a biennial award.

In the past, three finalists would hold exhibitions at Atelier Hermes, and then an international jury would select one winner every year. But from now on, the jury will select just one finalist, he or she will take part in a residency program in Paris for four months, and then present the resulting works at a solo exhibition at Atelier Hermes.

Asked about what prompted the company to change the award, Kim said that in the past the Hermes Foundation Missulsang was the only art award given out by a foreign company operating in Korea, while today there are many similar awards.

“We deliberated on what would be the best way to support young artists, besides financially, as [Korea’s] top art award,” Kim said. “We believe the residency program will help artists and their works mature through exchanges with artists from other parts of the world.”

Besides supporting artisanship and innovation in the area of visual arts, Hermes is also committed to supporting education and training.

Between 2010 and 2012, the Fondation d’enterprise Hermes supported the robot club at a child welfare facility in Busan called “House of Boys.” The club, which consists of young boys interested in science and technology, actually won a gold medal at the International Robot Olympiad in 2008 and a silver medal the following year.

In addition, between 2010 and 2011, the foundation supported students from Dogye Elementary School in exploring their talent through musical performances. The school is in Samcheok, Gangwon, a small mining village. But with the decline of the mining industry, the number of residents decreased drastically, and so did students.

From 2014 to this year, the foundation was involved in a project of the Autism Society of Korea which offered young adults with autism illustration and design courses to help develop and apply their skills in society.

Hermes Korea has also been a longtime patron of the Busan International Film Festival, in particular sponsoring a retrospective of Korean filmmakers or Korean films every year from 2001 to 2013.

And in the area of performing arts, the company will be sponsoring “Danse Elargie,” which will be held at LG Arts Center in Seoul next June before heading to the Theatre de la Ville in Paris, as part of celebrations marking the 130th anniversary of the establishment of diplomatic ties between Korea and France.

Despite Hermes’ active patronage in the area of contemporary art, education, film and performing arts, the foundation has so far not extended support to traditional Korean arts.

The Fondation d’enterprise Hermes last year supported a Franco-Japanese initiative on traditional paper-making skills, according to the foundation’s activity report. Kim of Hermes Korea said that as of now there are no plans for a patronage program for traditional Korean artisans.