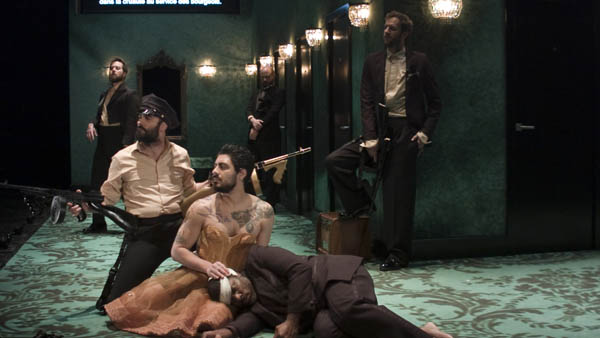 Directed by Arthur Nauzyciel from France, the black humor play “Splendid’s” will be staged at the Myeongdong Theater this weekend. Provided by the organizer

Friday and Saturday: “Splendid’s” is a play written by Theatre of the Absurd playwright Jean Genet. The play is about seven gangsters who take over the luxury hotel Splendid and accidentally kill their hostage in the process. Directed by French director Arthur Nauzyciel, the play delivers Genet’s message about existential woe through its cinematic staging and black humor.

Oct. 27 to Nov. 1: The Universal Ballet Company will showcase “La Bayadere,” a spectacle ballet which has been highly praised in the U.S. With the Indian Empire as its backdrop, “La Bayadere” is full of Oriental mystique. This large-scale blockbuster ballet features about 150 dancers led by three main characters: temple dancer Nikiya, young warrior Solor and princess Gamzatti, who are in a love triangle. Like the Korean premiere of the piece in 1999, “La Bayadere” will once again show off the power of classical ballet.