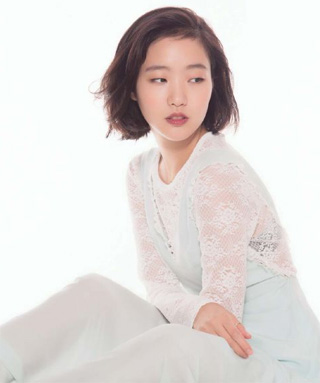 She has a young face, but on it she is capable of conveying deep sadness and pain.

Perhaps that’s why actress Kim Go-eun has been able to pull off such complex roles in the past and in “Memories of the Sword,” which opened in theaters just last week.

Since her unforgettable debut in “Eungyo” (2012), in which she played a high school girl who becomes the sexual fascination of a 70-year-old poet, the 24-year-old has taken parts in rather dark movies.

And along the way, she has emerged as one of the most sought-after actresses in the Korean film industry.

Asked about how she hopes to age as an actress, Kim said she wishes to age “naturally and go with the flow.” She added that she wants to live and also perform accordingly in the right roles for her age.

Here is an edited excerpt of her recent interview with the JoongAng Ilbo, an affiliate of the Korea JoongAng Daily.

I guess it’s because of my background in dancing. I tried my best to accentuate the lines and curves as much as possible because I wanted my action moves to be like dancing.

Your character, Hong-yi, requires a wide spectrum of emotions, as she’s at first an innocent young girl but turns into a vengeful woman after losing her parents.

Yes, and I interpreted it as her growth. In the initial scenes, Hong-yi is very simple. She plays with her friends, is happy when she wins a martial arts competition, gets frustrated when she’s ignored. But once she learns about her enemy, she wanders around and goes through emotional turmoil. Growth is about that, I think: going through various emotions.

Since your debut in “Eungyo,” you already made four films. How much did you grow?

I don’t think it’s a good thing to grow fast. I’d like to grow naturally and take on roles according to my age. I was lucky that I played roles that were my age [at that time].

You are right. And whenever I work with those amazing actors, I feel like their colors get absorbed in me. I feel like I’m a blank, white paper and their colors - green, red and black - get painted on me. They had different colors, but they had one thing in common: they all treated me as equals and respected me. I think it’s because they’ve all been where I am, so they understand.


You seem to have a filmography that actors your age would envy. Do you care about ticket admissions or how successful the films are?

I always prepare for the worst. For instance, when I chose to work on “Eungyo,” I prepared myself in case it totally failed. I think imagining the worst-possible scenario helped me get through hard times as I took part in the film. I’m also preparing for the worst for my upcoming work, “Cheese in the Trap.” If you do that, you’ve got nothing to lose. Isn’t that quite good? (Laughs)